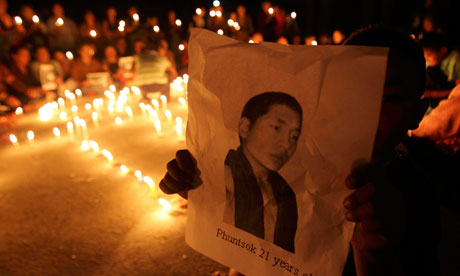 According to U.S. government-funded Radio Free Asia, a Tibetan father of seven in his mid-forties self-immolated on April 15. He becomes the 139th Tibetan to self-immolate in protest of Beijing’s policies in Tibetan regions since 2009, and the second to do so this month:

Nei Kyab, believed to be in his mid-40s, set himself ablaze on April 15 in the courtyard of his home in Soruma village, Choejema town, in Ngaba (in Chinese, Aba) county in the Ngaba Tibetan Autonomous Prefecture, a local source told RFA’s Tibetan Service.

“He was protesting against Chinese policies in Tibet,” RFA’s source said, adding, “His body was taken away by police.”

Before staging his fiery protest, Kyab had set out offerings on an altar with photos of exiled spiritual leader the Dalai Lama and the Panchen Lama, Tibetan Buddhism’s second-highest ranking spiritual leader.

[…] A brother-in-law, Dargye, was one of two men who self-immolated in a similar protest in Tibet’s regional capital Lhasa in May 2012, he said.

Earlier this week, Beijing released a white paper telling the Dalai Lama to “put aside illusions” about resuming talks with Beijing, and accusing him of encouraging Tibetans to self-immolate. The Dalai Lama has remained mostly silent on the issue, saying he has little other choice. “This is very, very sensitive political issue. Whatever I say the Chinese hardliners always manipulate,” he said last year in an interview with TIME.

For a data analysis of the Tibetan self-immolations, see the Tibet Data GitHub page.