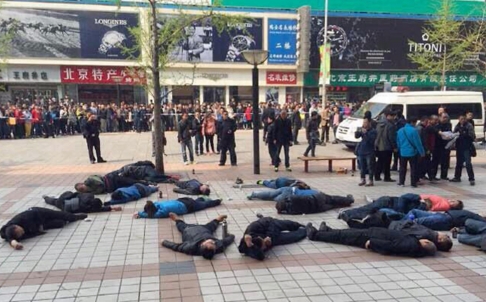 A group of more than ten taxi drivers tried to commit suicide on Saturday by drinking pesticides in Beijing in an act of protest against what they viewed as unfair treatment by their taxi companies. The incident follows a wave of strikes and protests by taxi drivers across China. Dan Levin at The New York Times reports:

At least 10 men, some of them frothing from the mouth, fell to the ground on a busy sidewalk at the Wangfujing shopping center about 11 a.m. after drinking the pesticide, according to the Beijing police force’s official microblog account. The men were rushed to nearby hospitals and all survived, the police said.

Videos of the protest quickly spread on Chinese social media sites, showing the men splayed on the ground and large crowds staring at them from behind police cordons.

According to The South China Morning Post, the men were all from a city in the northeastern province of Heilongjiang and tried to kill themselves to protest the way taxi companies renewed their vehicle leases. [Source]

One protester told mainland media outlet Caixin they had travelled to Beijing to petition against a 2011 reform affecting taxi company leasing renewals.

“We arrived by train on Monday but got no response after taking our complaint to both the State Bureau for Letters and Calls and the Ministry of Transport,” he said, before police halted the conversation.

The reform in Suifenhe required taxi drivers to join government-appointed taxi operators or leave the industry in return for compensation. Taxi drivers are not allowed to be self-employed. [Source]

Fei Chang Dao reports that several Chinese news websites and search engines have censored their initial reports on the incident, which included images of unconscious protesters, and replaced them with the Beijing Police’s official announcement regarding the incident. Previously, twelve other petitioners attempted public suicide in Beijing in two separate incidents last summer.