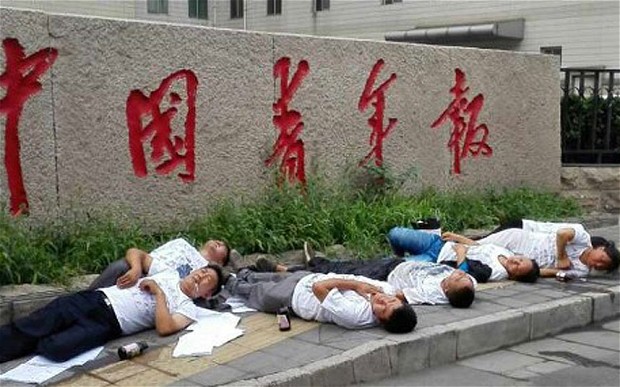 The Telegraph’s Tom Phillips reports on two separate incidents in which a total of 12 petitioners attempted suicide in Beijing. On Wednesday morning, seven people from Jiangsu lay on the ground outside the offices of the China Youth Daily newspaper after drinking pesticide, surrounded by documents related to the forced demolitions of their homes in Jiangsu:

Qin Zeying, the wife of one of the group, 58-year-old Cai Fuxi, said she had not been aware of her husband’s plans but hinted that she supported them.

Ms Qin said her husband, who she believes is now “out of danger”, had dedicated his life to obtaining compensation after the family home was demolished.

He had previously travelled to Nanjing, the provincial capital, to protest, she said. There, he was detained and thrown into an illegal “black jail” where, for three days, he had “no food, no sleep and not even a drop of water to drink”. “All my husband wants is to get an answer,” she added. [Source]

According to Global Times’ Cao Siqi and Chang Meng, the petitioners had hoped for coverage of their stories in China Youth Daily, and decided to stage the protest outside its offices when this failed to appear:

Wang Hai and Jiang Yanjun, petitioners from Sihong who did not participate in the suicide, told the Global Times that the petitioners gave their materials to a male reporter from the China Youth Daily in May in front of the newspaper’s building in Beijing.

“The story was never printed. Some petitioners were imprisoned after they came back from Beijing. Many felt that they were fooled,” Wang said.

The China Youth Daily could not be reached to confirm the information and the reporter’s work phone number provided by the petitioners was later found to be invalid. [Source]

12 petitioners from Wuhan drank pesticide in Beijing in December; a 2012 report from Amnesty International found that 41 people had self-immolated in protest at forced evictions between 2009 and 2011. Other frustrated petitioners have occasionally resorted to bombings or arson attacks. Central authorities have repeatedly promised better protection of petitioners’ rights in recent months, but Human Rights Watch’s Maya Wang told The Telegraph that there seems to have been no noticeable improvement.