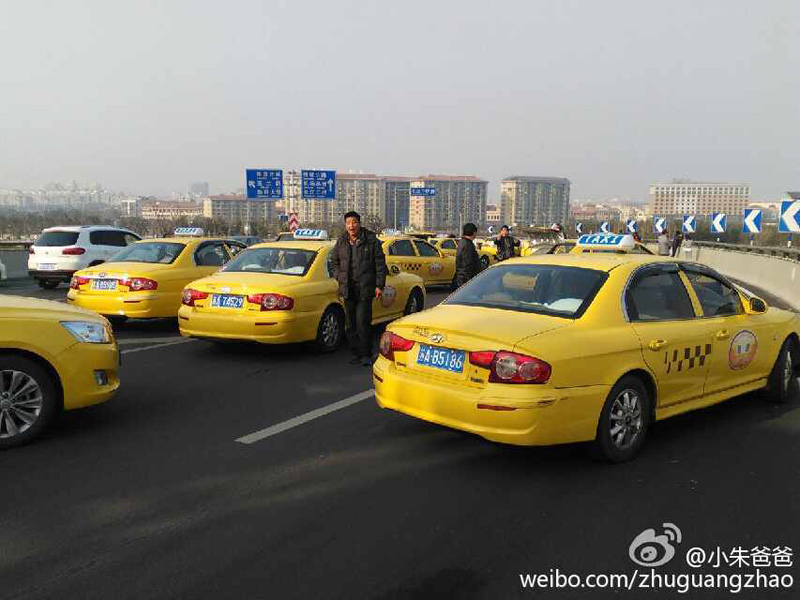 Strikes by taxi drivers has spread to numerous Chinese cities, spurred by complaints about mistreatment by their companies and excessive fees—as well as the growing competition from ride-sharing apps—and enabled by social media. Andrew Jacobs at the New York Times reports:

Early in the week, hundreds of drivers in the northeastern rust-belt city of Changchun blocked roads, prompting the intervention of police officers, who arrested scores of drivers, according to social media postings that were later deleted by censors.

Cabbies in other cities, including Chengdu, in Sichuan Province, and Nanchang, the capital of Jiangxi Province, also took part in organized work stoppages.

[…] In an article published by China Daily, one driver complained that he had to hand over more than half of his fare receipts to the fleet company from which he rented his vehicle. “I get up before 6 a.m. every morning and sit for about 14 hours a day, only to get 2,000 yuan a month,” or about $325, said the man, Liu Xingyou. “That’s unbearable.” His income is $70 less than the national average.

Although taxi strikes in China are not new, the cascade of copycat protests around the country highlights the organizational power of social media, presenting a challenge to a government that has little tolerance for labor unrest. [Source]

Last week, a strike in northeastern Liaoning province spread to Nanjing, the capital of Jiangsu province, where striking cab drivers were beaten and their cars smashed, the official China Youth Daily said, without identifying the assailants.

The cabbies’ grievances include the rental fees they must pay taxi companies, which can be as much as 280 yuan ($45) a day in Changchun, according to local media.

Another is the emergence of taxi hailing apps such as Uber, and local rivals Kuaidi Dache and Didi Dache, which give customers the choice to call private cars without taxi licences.

But China Labour Bulletin says that competition from ride-sharing apps is the least of the striking drivers’ concerns:

The cab companies can arbitrarily raise the monthly fee, while the driver has to cover the costs of fuel, maintenance and repairs. Drivers are often considered to be self-employed and get few if any employee benefits. In major cities the leasing fee can be around 10,000 yuan a month, which means drivers have to work 12 hours a day, every day of the week just to get by. If business is slow, as was the case during the government crackdown on prostitution in Dongguan last summer, drivers can sometimes take home less than a local factory worker.

With earnings so low, drivers understandably get angry when their business is poached by unlicensed cabs that are not subject to same burdensome regulations as they are. A brief examination of the hundreds of taxi strikes over the last few years shows that competition from unlicensed cabs has been one of the primary causes of protest. The use of taxi apps is merely the latest manifestation of unfair competition in the transport industry. [Source]

Taxi strikes are a regular occurrence in China’s cities. Read about past strikes via CDT.