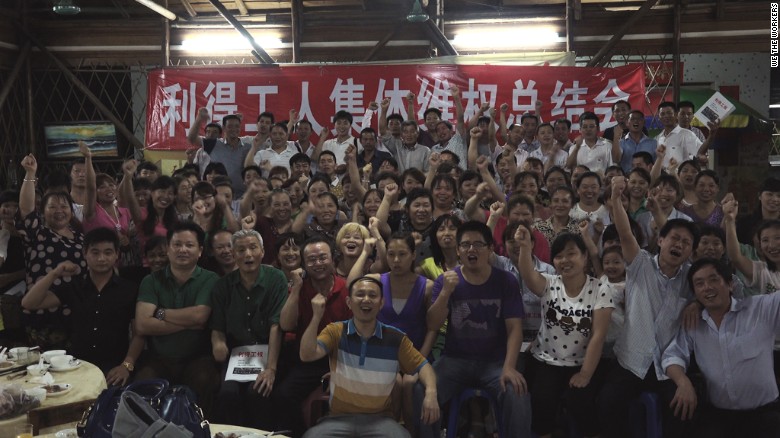 The conviction last September of three prominent labor activists for “gathering crowds to disturb social order” may have marked the final end of an era of “pragmatic authoritarianism” toward labor organization. The shift towards a harder line was captured by director Wen Hai in his new documentary “We, The Workers,” which appeared earlier this month at the International Film Festival Rotterdam. James Griffiths highlighted the film at CNN last week:

While much has been written about strikes and protests, Wen’s film offers rare insight into how such collective action is planned and organized, and how hard NGO employees try to stay within the moving goalposts of what activism is permissible in China.

[…] According to Manfred Elfstrom, an expert on China labor movements at Cornell University, for a long time such groups were tolerated by the government and even occasionally encouraged by local authorities. This all changed in 2015, he said, when “the crackdowns have gotten increasingly severe.”

The sudden shift in attitude caught even Wen off guard. “During the early process, I didn’t realize that it would be a danger and risk for me … to make such a film,” he said.

[… E]ven though the activists work within the law, they often aren’t protected by it. During filming, organizer Peng Jiayong was abducted and savagely beaten, ending up in hospital. Since 2015, dozens of other activists and lawyers have been detained, arrested and harassed.

[…] Wen is optimistic. “Even though now the situation and crackdown is very depressing, in the long term, workers’ agency, their ability to defend their rights, and the awakening of their human consciousness is improving,” he said. [Source]

The activists imprisoned last September were accused, in a video shared on Sina Weibo by the Communist Youth League and Global Times, of cooperating with foreign plans to tip China into instability and revolution. In the CNN report, Wen offers a sharply different perspective based on his past work in the Middle East and North Africa, arguing that independent labor rights organizations and other civil society groups could offer a vital bulwark against chaos and catalyst for positive social change. “(Peng) Jiayong and the other NGO workers,” he says, “are a very constructive power in rebuilding our society.”

On Twitter, Griffiths described “We, The Workers” as “one of the most inspiring films I’ve seen in years, testament to [the] power of solidarity and resistance.” The trailer:

South China Morning Post’s Clarence Tsui recently described Wen’s various brushes with the Chinese security apparatus, his eventual exile in Hong Kong, and his recent collaborations with activist and “We, The Workers” producer Zeng Jinyan and with artist Ai Weiwei. For the AFP, Joanna Chiu focused last week on the filming of “We, The Workers”:

Wen first travelled to remote southwestern China to see the poverty that left many workers “so desperate to find a job that they take it first, then worry about the work conditions later”.

In 2014 Wen moved on to Guangdong province, China’s manufacturing hub, living with a labour activist in a cramped apartment for a year.

Wen rose with workers and activists in the morning and ate with them, and they let off steam together at karaoke bars. He snuck into factories to film assembly lines.

“The workers accepted me as one of their crew. I had a great time, and it was only months later that I saw how dangerous their situation was becoming,” Wen said.

[…] “The activists were just educating other workers about their legal rights. I thought it was safe because everything revolved around actual labour laws,” Wen told AFP after a private Hong Kong screening. [Source]

In January, China Labour Bulletin posted the transcript of a talk given by Peng Jiayong at an event organized by the Unirule Institute of Economics. (The institute, cofounded by liberal economist Mao Yushi, was stripped of its website and social media accounts earlier this month.) Peng described his work and the inadequacies of arbitration and other legal processes that make worker actions and collective bargaining necessary:

In the Lide Shoe Factory case I was no longer a worker, but an NGO staff member. Why did the Lide workers elect worker representatives? They did not do it out of the blue, not in a power struggle with the union, nor driven by political motivations. Some media portrayed it as an infiltration by hostile foreign forces. Far from it. Lide workers knew that the factory would be relocated soon but the factory had owed them many benefits like social security payments, housing provident fund, overtime pay, paid annual leaves, and high temperature subsidies for years. They could not claim these benefits if the factory is relocated. They need to defend their rights. […] All in all, it was a rather successful bargaining case that was hailed by the academia as a tripartite success story for the employer, the workers and the government.

This story, however, did not end on a happy note. There was criminal punishment. I was detained for 37 days. Our Director Zeng Feiyang is sentenced to three-year imprisonment, suspended for four years. My colleague Meng Han is still being detained. Why did this happen? Mostly because the workers sought help from Panyu Workers’ Centre, a labour NGO that was accused to be “infiltrated by hostile foreign forces” because it was indeed partly funded by foreign funding. The workers were not unwilling to seek help from the union. They were turned away time and again. It’s only then that they asked Panyu Workers’ Centre for help. That’s why they didn’t trust the union. And that’s why we were charged with the criminal offence of gathering a crowd to disrupt social order seven to eight months later. [Source]

Most of the Panyu Workers’ Center’s foreign support came from the Hong Kong-based China Labour Bulletin. Besides its activities to train and support workers on the mainland, CLB is known for tracking labor actions with its widely-cited Strike Map. (The group stresses that this offers “a sample of the broad spectrum and an indicator of trends in worker actions,” not “a tally of the total number of strikes and protests.” Authorities in Zhejiang, for example, acknowledged some 1,700 incidents in the first ten months of 2016, of which only 82 were recorded on the Strike Map.) Despite the fate of its collaborators, CLB founder Han Dongfang wrote last month that “repression no longer works as in the past,” and that “labour unrest in China is not going to go away. [… I]t is my firm conviction that the question is no longer if the Party will introduce some form of collective bargaining, but when. It will do so in order to ensure its own survival.”

In the meantime, authorities have sought to pacify workers with measures such as reform of the hukou residency permit system. At The Diplomat last week, Spencer Sheehan discussed the limitations of these reforms. At South China Morning Post, Jane Cai reported other recent signs of high-level attention to labor issues:

To create a “responsible and devoted” team of manufacturing workers, the mainland should accelerate reforms to smooth their career paths and protect their rights and interests, President Xi Jinping told the Central Leading Group for Comprehensively Deepening Reforms on [February 6].

The meeting, attended by top leaders and related ministry heads, called the working class the leading strata of the nation and passed a reform proposal for manufacturing workers, Xinhua reported.

[…] “Gestures and efforts to soothe workers mean a lot to social stability, which is a big matter for the party before the 19th party congress, a top-level power reshuffle,” said Zhang Lifan, a historian and political commentator.

[…] Hu Xingdou, a political economist with the Beijing Institute of Technology, said the government desperately needed to motivate workers to drive growth in the long term. While China had tapped cheap labour to drive skyrocketing growth in the past, little effort had been made to improve workers’ skills and knowledge through education or training, Hu said. [Source]

That era of cheap Chinese labor is already a thing of the past. At Vox, Zeeshan Aleem reports that “Chinese factory wages are now higher than in Brazil, Argentina, and Mexico [……] more than five times manufacturing wages in India, and ‘more on par with countries such as Portugal and South Africa.’” Matthias Lomas recently wrote at The Diplomat on which countries might succeed China as low-cost labor centers.