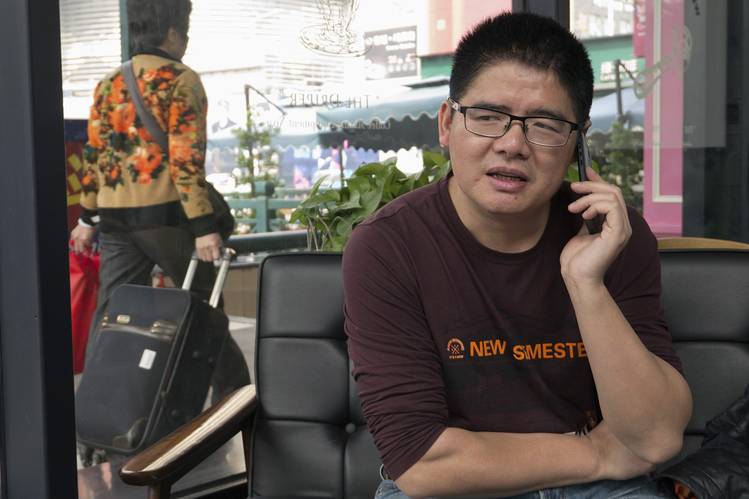 On Monday, three labor activists associated with Guangdong’s Panyu Worker’s Center were sentenced for “gathering a crowd to disturb social order,” 10 months after they and others were detained last year. The center’s founder Zeng Feiyang was sentenced to three years in prison, suspended for four; his colleagues Tang Huanxing and Zhu Xiaomei received 18-month sentences, suspended for two years. Though these punishments were lighter than some feared, all three remain under the threat of prison, and even a suspended sentence is unusual for those who, like Tang and Zhu, had already been released on bail. Xinhua noted several “facts that influenced the lighter penalties”: all three pled guilty, repented, will not appeal, and were first-time offenders.

The convictions and broader crackdown on labor organization, Cornell University’s Eli Friedman told The Wall Street Journal, are “not just about scaring labor NGOs, but reasserting that issues relating to strike resolution and bargaining are completely off limits.” According to Zhu’s lawyer Pang Kun, “it’s obvious that the authorities want them to depend on the government and the system to deal with similar labor disputes.” The pending prosecution of Li Tingyu and Lu Yuyu, citizen journalists who tracked labor protests and other “mass incidents,” underlines this conclusion.

Part of the authorities’ strategy seems to be to taint labor activism by associating it with supposed foreign conspiracies against China. Such accusations have already been directed at rights defense lawyers and activists, Hong Kong democracy activists, and foreign journalists. Even nationalist protests have been blamed, in arguments amplified by official bodies like the Communist Youth League, on foreign incitement. The claims were also part of an earlier round of attacks on Zeng’s activism and alleged character flaws, which prompted supportive statements from workers he had helped and a short-lived legal challenge by his mother.

In a courtroom confession aired by state broadcaster CCTV, Zeng appeared to confirm the charges of collusion. He said that he had accepted training and funding from “foreign organizations which regard China with hostility [….] In accordance with their wishes, I incited and organized workers to use extreme methods to protect their rights, blowing situations out of proportion to build influence. In the course of this, I received a large amount of money from abroad but was still referred to as a so-called ‘star of the labor movement.’”

The Panyu Worker’s Group did indeed receive foreign support, mostly from the Hong Kong-based China Labour Bulletin. Founder and veteran labor activist Han Dongfang told the AFP after this week’s sentencing that “whatever Zeng Feiyang and the others said to humiliate themselves and undermine the great work they did, I wouldn’t believe one word or dream that it represents their own will.” In a number of recent cases, confessions and other incriminating statements are suspected to have been coerced by methods such as threats against family members.

CLB’s own funding comes “from a wide range of government or quasi-government bodies, trade unions and private foundations based outside China.” Han also hosts a radio show on the U.S. government-funded Radio Free Asia, which formed the basis of a recently published ebook on “the struggles and challenges faced by China’s workers during the country’s dramatic economic rise.” But far from advocating “extreme methods,” CLB argues that “the only realistic option is to work through the existing system,” rather than try to challenge or overturn it. In a blog post earlier this month, the organization stressed that “China Labour Bulletin worked with the Panyu Centre for five years before the December 2015 crackdown: Every aspect of that cooperation was known by the security authorities in Guangdong from its very outset.”

The “hostile foreign forces” theme was picked up by a video, shared on Weibo by the Communist Youth League and nationalist-inclined tabloid Global Times, which accused foreign diplomats outside the Guangzhou court of working to foment a Ukraine-style “Color Revolution” and, less dramatically, of using an unlicensed vehicle. The video links Zeng’s statement with the 2011 appearance of then-U.S. Ambassador Jon Huntsman on Wangfujing at the time of a planned “Jasmine Revolution” protest, and another incident in August in Tianjin. That episode, involving foreign diplomats and the wives of two lawyers detained in last year’s “Black Friday” crackdown, was documented in an earlier video translated by China Change. The new video’s transcript, together with the Youth League’s comment:

Communist Youth League: Apparently some foreign ‘friends’ also came to have a look after the farce outside Tianjin’s No. 2 Intermediate People’s Court … Don’t go! The people were just asking a few simple questions, why leave so dejectedly? [doge] #guardagainstcolorrevolution

What are these foreign observers up to?

On September 26, a group of strange foreigners gathered outside a certain courthouse in Panyu, Guangzhou. Upon arriving, they said nothing, but stood by the roadside looking around. They seemed to be waiting for someone, or hoping for something to happen. They frequently recorded the scene with their cell phones. It was unclear where they were from, or what they were doing. Could this be some new trend in foreign tourism? Confronted by journalists, they were evasive, and disappeared into the crowd. The few who remained were cornered by reporters, and could only awkwardly equivocate:

“Diplomat.”
“From where?”
“We all come to [from?] other countries, different countries … I’m American, of course”

In fact, this was not the first time such a gathering of foreigners has been observed.

[Footage of Huntsman on Wangfujing in February 2011]

Netizen: Excuse me, Mr Ambassador, but what brings you here?
Huntsman: I came to take a look.
N: Does it make you happy to see chaos in China?
H: No.
N: This is the American ambassador!

Similarly, on August 1st a group of foreigners with unclear backgrounds assembled outside Tianjin No. 2 Intermediate People’s Court to perform an inglorious farce.

[Video of the scene in Tianjin]

Zeng: “After contacting several foreign organizations which regard China with hostility, I accepted their training and funding. In accordance with their wishes, I incited and organized workers to use extreme methods to protect their rights, blowing situations out of proportion to build influence. In the course of this, I received a large amount of money from abroad but was still referred to as a so-called ‘star of the labor movement.’”

In short, it was all about blowing up news stories to “astonish” the people of friendly nations and create a pretext to criticize our China.

In fact, this sort of trickery isn’t even anything new. In Ukraine, for example, it was “big news” and “the astonishment of allies” that led in the end to “color revolution.”

So this disturbance outside the courthouse with a few foreigners coming to show their concern perhaps is really within the scope of their professional duties. For example, this little brother looks very familiar. It seems he also appeared in Ukraine. Now he’s come to Guangzhou to carry out some unknown scheme. No matter how you put it, first standing there, striking a pose on stage then going back to explain it all to his colleagues: “Draft a report for my government … for my government … for my government.”

It’s just a shame: so high and mighty when he arrived, so disappointed when he left. This group of foreigners couldn’t endure the scrutiny of bystanders and dejectedly ducked into an alley before unexpectedly driving off together in a little van with no license plates leaving the crowd with one big question: remind me, in rule-of-law China, even with “diplomatic immunity,” can you take an unlicensed vehicle on the roads? [Chinese]

For all the video’s vehemence and innuendo, the public “evisceration” this week of attempts to blame Western countries for China’s economic problems, along with other signs of a backlash against online nationalism, raise questions about how wide an audience will prove receptive.