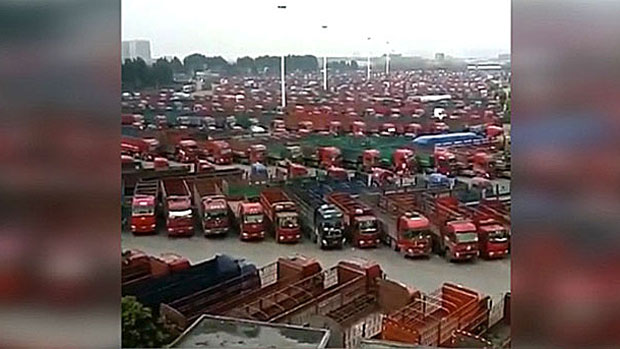 China Labour Bulletin reports on nationwide truck driver protests against stagnant wages, high fuel costs, arbitrary fees, and the monopolistic hold that online platforms run by the company Manbang have on the industry:

Truck drivers across China have staged nationwide protests and refused to work over the weekend. “We can’t take it anymore, we have no choice but to stand together!” read a widely circulated call for unity on social media.

The unsigned message calling on “30 million truck drivers across China” claimed that transport fees were too low to be sustainable and that fuel costs have been steadily increasing over the last few years.

[…] Since Friday 8 June, collective protests by truck drivers have been recorded in at least a dozen locations in Shandong, Sichuan, Chongqing, Anhui, Guizhou, Jiangxi, Shanghai, Hubei, Henan and Zhejiang. Videos of long caravans of trucks bearing banners and slogans circulated on Chinese social media. However, many posts were quickly deleted by censors and this combined with the complete silence of the official media on the subject has made it virtually impossible to assess the actual extent of the strike.

[…] Truck drivers, most of them independent contractors who have to continuously take orders to stay solvent, argue that they have little if any profit margin since fuel costs have been on the rise and transportation rates have failed to catch up.

Another common grievance raised by truck drivers was the arbitrary application of legal sanctions for traffic violations etc, which results in constant and unpredictable financial losses along the road. [Source]

The Wall Street Journal’s Te-Ping Chen reports further on last weekend’s strike, and on the role that online platforms have played in sowing discontent among service providers in China’s freight industry:

Trucking is a grueling job in China. Drivers typically own their own rigs and spend long, exhausted stretches on the road away from family. Zhang Huande, a trucker based in the Shanghai area who transports construction materials, said that in recent years rising fuel costs have cut his earnings by some 40,000 yuan ($6,245) a year. He declined to state his annual income.

“If I was buying a new truck and just getting started, I’d jump off a building,” said Mr. Zhang, who didn’t participate in the weekend strikes but heard of others who had in the central city of Hefei.

Another disruption in recent years, truckers said, has been the arrival of application software that directly matches truck drivers with those needing their services. One of the largest is owned by Manbang Group, formed by the November merger of two other services, Yunmanman and Truck Alliance Inc. The app claims more than 5 million truck drivers use its service, a sixth of the country’s total.

Some drivers, as well as Mr. Crothall, said the apps were helping to drive down haulage fees. New features in the Yunmanman app rolled out on a trial basis earlier this month sparked particular anxiety, some drivers said. The feature makes it possible for drivers to bid for jobs posted by shippers directly through the app—instead of negotiating via phone. It was launched in the cities of Hefei and Jinhua, where protests occurred. Police in Hefei and Jinhua didn’t answer telephone calls to request comment. [Source]

While some media outlets reported protesting truck drivers chanting “down with the CCP” (打到共产党), China Labour Bulletin has noted that these drivers seemed to actually be chanting “down with the freight truck gang” (打到货车帮) in reference to the online platform. On Twitter, George Washington University Law School Professor Donald Clarke noted how much less provocative the latter chant is: