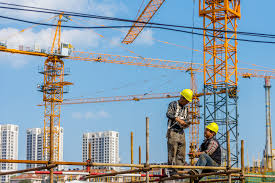 In the run-up to International Workers’ Day on May 1, crane workers across China organized a joint strike in protest of stagnant wages and poor working conditions. Initially organized by the Changsha Crane Operator Federation on April 25, news of the coming strike quickly spread to other cities and provinces, reaching Hainan and Zigong, Sichuan by the next day. Using social media to rally support and orchestrate demonstrations in up to 30 cities, this was the largest collective strike seen in decades with 10,000 crane operators protesting in Chengdu alone. The China Labour Bulletin has more:

“We work 12 hours a day on average, often until late at night or overnight with no overtime compensation, we have no social insurance, no labour contracts and go without government supervision,” claimed “Uncle Young” in a collection of worker testimonies published by Epoch Pioneer.

The crane operators claim that they’ve been making just 4,000 and 5,000 yuan per month for the last decade and are demanding at least 7,000 yuan per month. The workers stressed that they should be paid more than ordinary construction workers because of their harsh, high-pressure working environment: high temperatures and long shifts with no toilet breaks inside high-altitude cabins, and the constant psychological pressure of transporting heavy construction materials that could potentially cause fatalities. The salary increase proposed by the crane operators is a comprehensive structure that differentiates pay levels according to experience and type of work. [Source]

Many protesters were arrested or threatened by police, even though collective action is not necessarily illegal in China. In comparison to previous large-scale strikes at Walmart, the crane workers’ is significant because it is a movement of many separate enterprises nationwide. As a result, these strikes represent a watershed moment for the Chinese labor movement according to Labor Scholar Wang Jiangsong (王江松) of ChinaChange:

This instance of a simultaneous mobilization of crane tower operators in dozens of cities across the country has every qualification to be considered the beginning of a historical inflection point in labor in China.

[…] The outside world only learned about this collective action by crane operators after the fact, and knew nothing of their internal discussions, contact with one another, organization, and planning before the fact. There is also no information or evidence indicating that outside players (for instance labor NGOs) got involved or played any role in assisting, counselling, guiding, or providing any other form of help. Even less has there been any shadow of “hostile foreign forces.” Thus, we have every reason to understand this sequence of events as a self-initiated, self-directed, and self-organized collective action on the part of crane operators themselves.

[…] All this abundantly demonstrates that the level of [labor] consciousness and organizational capacity of workers in China has reached a new level, at least in some sectors and regions, and they’re capable of their own collective action without the involvement of outsiders.

[…] From a broader perspective, it is beneficial not only to workers, but the entire construction industry, society, and the nation. The next direction for the labor movement in China is for workers in each industry and sector to autonomously form their own federations. [Source]

Comprising 5.7% of China’s GDP, the construction industry employs 60 million workers, many of whom are migrants coming from poorer rural areas. Victim to the restrictive hukou system, these workers are often exploited by their employers. A 2016 government study found, of China’s 281 million migrant workers, two thirds were not provided a contract from their employer, and half experienced problems with being paid on time. In construction, even these statistics appear optimistic, as Ni Dandan of Sixth Tone reports:

Having worked as a plumber and an electrician on construction sites for eight years, Zhou Taichao said he has never seen a labor contract. “It’s not because I have no legal awareness, but if I insist on having a labor contract, I wouldn’t be able to find a job in this country,” the 32-year-old told Sixth Tone.

Hailing from Neijiang in southwestern China’s Sichuan province, Zhou has also worked in Guangdong and Zhejiang. But he has never observed any migrant worker on a construction site signing any form of contract.

“That’s common practice in the construction industry across the country,” Zhou said. “We only have verbal agreements with contractors, who pay us on an annual basis.” When his contractors owed him money, Zhou had no legal documents to rely on and could only keep asking them to pay. “It’s quite disturbing, but it happened to me a couple of times,” he said. “You just have to deal with it.” [Source]