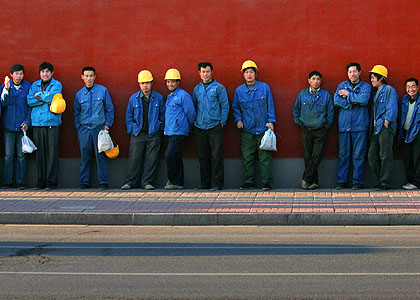 China’s slowing economy has led to an increase in worker strikes, disputes, and protests, as has been documented by many, including the Hong Kong-based China Labour Bulletin and the Supreme People’s Court of China. For CNN, James Griffiths has produced a multimedia overview of the current situation for workers in China, looking at the both causes of increased protests and government efforts to limit their impact on a national basis, including censorship and tightening controls over civil society groups:

Thanks to concerted censorship of both traditional and social media, many protesting workers “often don’t understand they aren’t the only ones,” says Maya Wang, China researcher at Human Rights Watch.

“They don’t recognize that these are systematic failures not local grievances.”

Because of this, protests and strikes “do not generate a kind of solidarity and political understanding within the greater population or facilitate a greater political consciousness.”

“The absolute bottom line is making sure their workers are not coordinating,” [Eli] Friedman says. [Source]

In response to the surge in worker protests, authorities have cracked down on labor activists in recent months. In the CNN report, Griffiths points to a planned restructuring of the state sector and millions of accompanying layoffs as a key factor that may lead to further unrest. The central government is taking steps to prepare for this possibility. In The Diplomat, Rebecca Liao offers her suggestions of how Beijing should best manage this transition:

This is not to say that Beijing isn’t preparing for that contingency. Indeed, the government has announced that it will be laying off 1.8 million workers in the coal and steel industries. It will also allocate 100 billion yuan ($15.27 billion) over the next two years to resettle the laid-off workers. Further downsizing will occur in other capital-intensive manufacturing sectors. The catch, however, is that resettlement funds will not be available until the SOEs have gone through the lengthy process of bankruptcy and debt repayment. Small wonder, then, that there is no time-frame for the current round of layoffs.

The common thread that runs through each of these deterrents to reform is the loss of jobs and household income. Greater marketization means the social contract between the Chinese people and the state will finally lose its socialist nature. The state will no longer be the main provider and employer. As workers struggle with the transition, they will take to the streets to protest, as they did over 500 times in January alone, and 2,700 times in 2015. Facing loss of power and social unrest, the CCP has returned to old tactics of anti-Western nationalism and heavy spending for new (and unnecessary) infrastructure, including new airports and rail lines to Tibet and Taiwan.

Here’s a better way forward: rewrite the Chinese social contract. Include social programs in an expanded fiscal stimulus package. Premier Li has announced that the budget deficit would increase by 3 percent this year, or $72 billion. With one of the lowest budget deficits and explicit debt levels in the world, Beijing can afford more and should spend it on stimulating demand. Higher social security for an aging population, increased minimum health insurance subsidies, unemployment benefits, job training (not merely resettlement to another SOE job) and tax cuts to stimulate spending—these are initiatives that will make the transition to a market-driven, consumption-based economy successful. [Source]

Local officials have also been warned that they will be held responsible for unrest in their jurisdiction, Chuin-Wei Yap reports for The Wall Street Journal:

The Communist Party’s Central Committee and the State Council, China’s cabinet, this week warned party and state officials that they will lose their jobs if they fail to control public unrest. That’s not altogether surprising: on one level,it’s just a restatement of longstanding practice.

“For more than 10 years, one of the assessment criteria for promotion of regional officials is the extent to which they can minimize protests,” said Willy Lam, a China politics analyst at the Chinese University of Hong Kong. “So most local officials pull out all stops to prevent petitioners going to Beijing.”
But this week’s announcement marks the first time authorities have come up with a definitive public statement explicitly warning party and state officials “at all levels” that their jobs are on the line, state media said.

Government officials are likely worried that the Shuangyashan incident and others could inflict a political cost on the leadership by highlighting issues such as the deficit of labor rights in China, Mr. Hu said.

Party chiefs face a difficult task. Over the next five years, they need to shut down millions of tons of industrial capacity that’s making China’s economy inefficient. This means downsizing scores of steel, coal and other large industries that currently employ hundreds of thousands of workers. They have promised to do this without large-scale layoffs. Those displaced, Mr. Li said, would be given new jobs or government assistance.

These promises now hang in the balance. [Source]

Earlier this month, thousands of employees of a state-owned coal mine in Shuangyashan City, Heilongjiang, took to the streets demanding unpaid wages. Read more about labor unrest in China, via CDT.