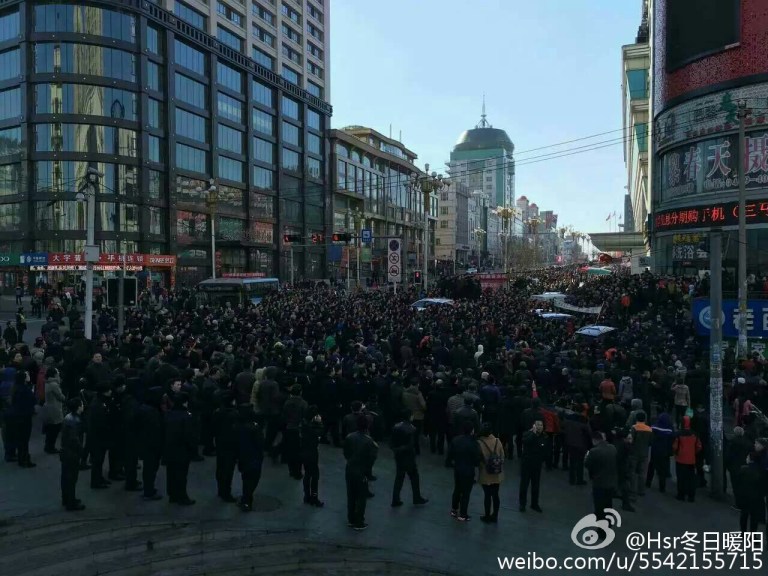 Labor unrest has increased throughout China as the economy continues to grow at its slowest rate in decades, and the central government has responded with a crackdown on labor organization. At The New York Times, Javier C. Hernández reports on mounting worker anxiety nationwide, and on heavy-handed official efforts to counter labor protest and mobilization:

As China’s economy slows after more than two decades of breakneck growth, strikes and labor protests have erupted across the country. Factories, mines and other businesses are withholding wages and benefits, laying off staff or shutting down altogether. Worried about their prospects in a gloomy job market, workers are fighting back with unusual ferocity.

[…] China Labor Bulletin, a labor rights group based in Hong Kong, recorded more than 2,700 strikes and protests last year, more than double the number in 2014. The strife appears to have intensified in recent months, with more than 500 protests in January alone.

[…] Most demonstrations have refrained from political attacks and focused on grievances such as wage arrears, unpaid benefits like pension contributions and unsafe working conditions.

President Xi Jinping, concerned about challenges to the ruling Communist Party, has responded with a methodical crackdown, quashing protests, dismantling labor rights organizations and imprisoning activists. But his government has also sought to placate workers, putting pressure on businesses to settle disputes and making billions of dollars available for welfare payments and retraining programs.

The approach underlines the political dilemma that labor unrest poses for the Communist Party, which has continued to portray itself as a socialist guardian of worker’s rights even as it has embraced capitalism and welcomed tycoons into its ranks. […] [Source]

The protesters are employees at Shuangyashan Mine, owned by Longmay Group. They held up banners saying: “We want to live, we want to eat,” according to photographs posted on social media

“Thousands of people have been protesting,” an eyewitness told Reuters by phone. The witness declined to give their name for fear of reprisal from the authorities.

“The police have been taking people away,” the witness said.

A statement posted on a Heilongjiang government website on Saturday night acknowledged some employees were owed wages but did not mention the protests. […] [Source]

At the South China Morning Post, Zhuang Pinghui reports that amid the protests, Heilongjiang governor Lu Hao acknowledged the owed wages and promised compensation while in Beijing for the annual meetings of the National People’s Congress. Lu had earlier denied protesters’ grievances.

Governor Lu Hao said on Saturday that his government would continue to support Heilongjiang Longmay Mining Holding Group but also ordered the firm to pay its miners their overdue salaries, a government statement said.

[…] Lu’s promise came hours after miners and their families took to the streets in Shuangyashan to demand their wages.

[…] Lu’s latest comment contradicted remarks he made just a week ago at a Heilongjiang delegation meeting during the congress, in which he said the miners did not have “even a penny” cut from their pay. Lu had also cited Longmay as a prime example of an inefficient, overstaffed state-owned firm, saying that the government could not afford to bail out the group. [Source]

Anger over Lu Hao’s earlier claim that the miners were paid on time was well-displayed on signs at the demonstrations. The New York Times’ Chris Buckley notes that that Chinese media has been silent on the protests, and points to the conflict in Heilongjiang as an indicator that recently announced plans to cut as many as six million jobs in state-run industries could face heated resistance without more government relief for laid-off workers:

[…] There were no reports of new protests on Sunday. But Liu Zhaohui, 32, a mine electrician in Shuangyashan, said an unorganized group of several hundred residents had gathered. “Since the end of last year,” he said, “there have been consistent problems with irregular payments from the company.”

“There are a lot of delinquent employers across the country now, but the problem is especially serious in the northeast,” Mr. Crothall said by telephone. “Local government and enterprises there often simply don’t have the money to pay.” […] [Source]

For a collection of images from and netizen responses to the protests in Heilongjiang, see a post from CDT Chinese. Read more on labor unrest, state-owned enterprises, and economic slowdown, see prior coverage via CDT.