Workers Are Fighting Back as Economic Dream Fades 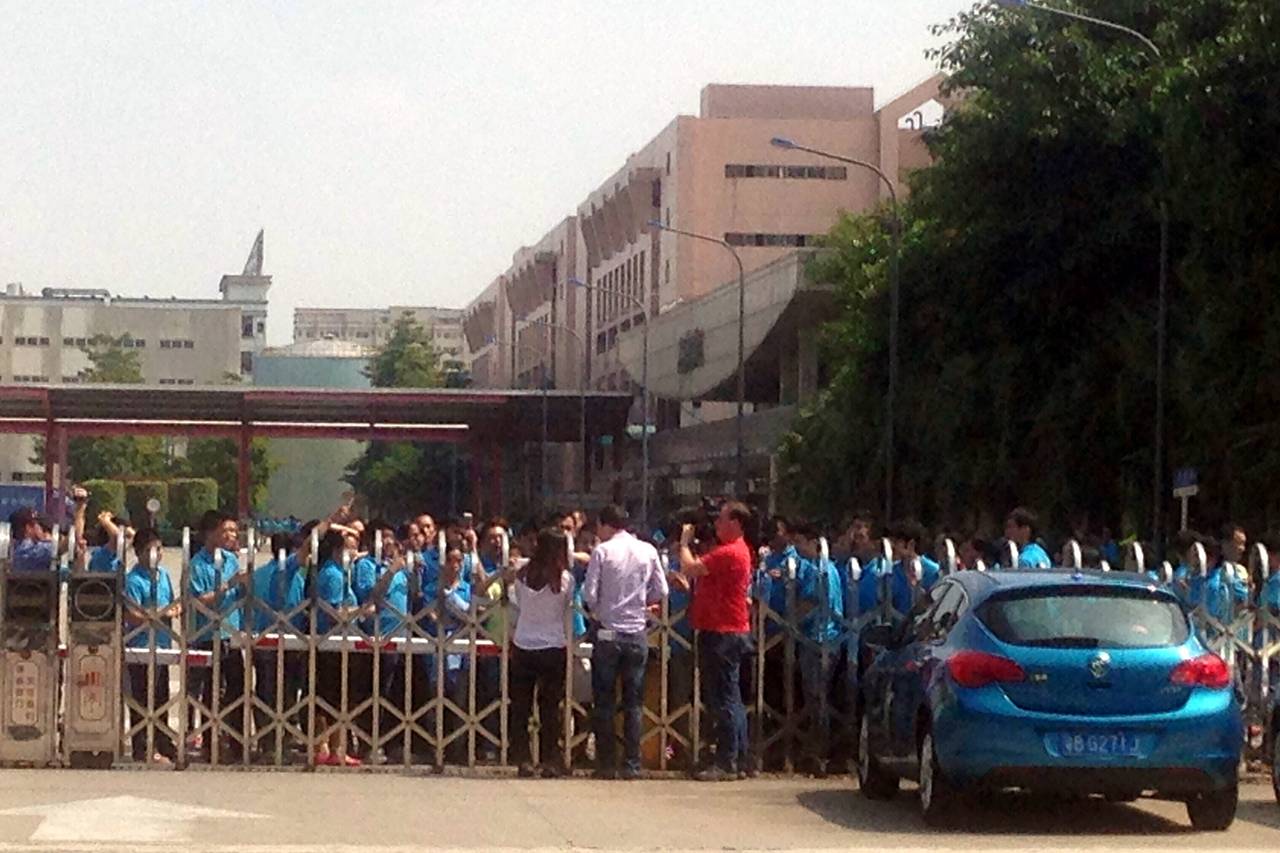 In the eastern province of Jiangsu, a group of auto workers and their relatives clashed with police during a protest over compensation for injuries the workers suffered as a result of an explosion at their factory last year. Xie Haitao at Caixin reports:

Dozens of factory workers, many of them from outside the manufacturing city of Kunshan, and their relatives were protesting at a city government building about the way their injury payouts are being handled.

More than a dozen of the workers’ relatives were detained amid the clash with police, witnesses said, and one said a few of their relatives were hurt in the incident.

The protest was linked to a group of nearly 70 workers who suffered severe injuries, such as burns to up to 90 percent of their bodies and deformed limbs. Many of the workers still require hospital treatment in Kunshan and have to be cared for by their relatives.

[…] The worker said he and others wanted officials to clarify the levels of compensation for lighter injuries and how future medical costs will be covered before they will agree to the assessments. [Source]

The worker demonstration in Kunshan is one facet of the growing labor unrest sweeping across China as the country’s economic growth slows. At The Wall Street Journal, Mark Magnier reports that weakening global demand has forced many factories to restructure or close in recent years. Growing job losses, particularly in the manufacturing sector, have led to sharp increases in labor protests.

The Hong Kong-based civic group China Labour Bulletin says strikes and labor protests nationwide nearly doubled in the first 11 months of 2015 to 2,354 from 1,207 in the same 2014 period. China’s labor ministry says 1.56 million labor-dispute cases were accepted for arbitration and mediation in 2014, up from 1.5 million in 2013.

Behind the strife is an economy decelerating faster than the government expected, sparking layoffs and factory closings.Economists say China has struggled to reach its 2015 growth target of about 7%, its slowest pace in 25 years, and most project slower growth next year.

China doesn’t release statistics on factory closings. The number of factories owned by Hong Kong companies in southern Guangdong province, where Shenzhen is located, fell by a third to 32,000 in 2013 from a 2006 peak, according to an analysis by Justina Yung of Hong Kong Polytechnic University for the Federation of Hong Kong Industries, a trade group.

[…] Factory employment in China has fallen for 25 months, according to a business-sentiment index released by Caixin, a Chinese magazine. China’s labor ministry says it expects employment to remain stable near term but says the impact of China’s slowdown and restructuring can’t be ignored. China’s Ministry of Public Security didn’t respond to inquiries. [Source]

China has managed mass layoffs at creaky, state-owned businesses like Longmay before, averting the threat of strikes and unrest by suppressing protests and offering payouts and job training.

But that was when the economy was booming and could readily absorb displaced workers. The test the government now faces in this depressed coal town and in other hard-hit areas across the country is whether it can head off labor discontent in a slowing economy.

[…]  The reaction of the demoralized workers is being watched closely because the staying power of the Communist Party has been immutably linked to its ability to deliver continued economic progress. The unwritten social compact here is that the party delivers growth, jobs and higher living standards, and in exchange, the workers acquiesce to its monopoly on power, surrendering the right to organize unions or protest.

That bargain could fall apart if workers no longer believe the government is living up to its end.

The signs of severe economic trouble are evident. For-sale signs hang on the facades of restaurants that draw few customers. Robberies are on the rise; manhole covers and cellphones are popular targets. Women say they have stopped wearing jewelry for fear of being assaulted. [Source]

In another post for The Wall Street Journal blog, Mark Magnier put together a list of “five things to know about labor unrest in China,” including these things:

2 How is the government responding?

China’s one-party state places a premium on maintaining social stability. The increase in labor protests is a major concern to Beijing, say experts. The government has increased its police response when labor unrest breaks out, say workers and labor activists. In recent days, the government has launched a crackdown in Guangdong, detaining and interrogating over a dozen labor activists.

3 How do workers organize protests?

Any action deemed a threat to social order in China is potentially illegal, as are independent labor unions, so workers must walk a fine line. If a shuttered factory is large, it’s common for hundreds, even thousands, of workers to walk slowly en masse to the government offices. This often blocks traffic even as workers try to avoid confronting police directly, which puts pressure on officials to mediate the dispute. Workers at smaller factories have fewer options and often take their cases to labor-arbitration tribunals, a path generally viewed as less likely to produce a favorable outcome.

[…] 5 What strategies do companies employ when shutting down?

One approach, labor activists say, is to offer compensation in stages, settling first with those who have worked a few years and are happy with the quick settlement. Companies then offer similar packages to longer-term workers, say workers and activists, undercutting their ability to negotiate and exert political pressure as a group. Some managers use the element of surprise, shutting down companies and removing equipment during major holidays. [Source]

Rights groups are calling on the Chinese government to release labor activists detained during a police roundup in Guangzhou earlier this month.  The official crackdown on labor activists and organizations could potentially backfire by destroying one of the few channels for disgruntled workers to voice their concerns peacefully, The Guardian’s Tom Phillips reports:

William Nee, a Hong Kong-based activist for Amnesty International, said “a coordinated attack” on Guangdong’s labour movement was under way.

[…] “This is the only time that I can remember in recent years in which many labour activists and organisations – without any kind of incident pre-empting it – have all of a sudden been taken in one fell swoop.”

“What organisations like [these] were doing was taking workers and trying to provide ways that they could organise and not cause destruction to society – preventing them from blocking roads and taking other extreme actions like kidnapping bosses and instead trying to work out their solutions through dialogue, with both the employers and with local government.

“If there aren’t people like that providing these types of services there is a greater risk of social instability spilling over in ways that the government doesn’t want to see.” [Source]

See also, “China’s Latest Crackdown on Workers Is Unprecedented” by Michelle Chen at The Nation.