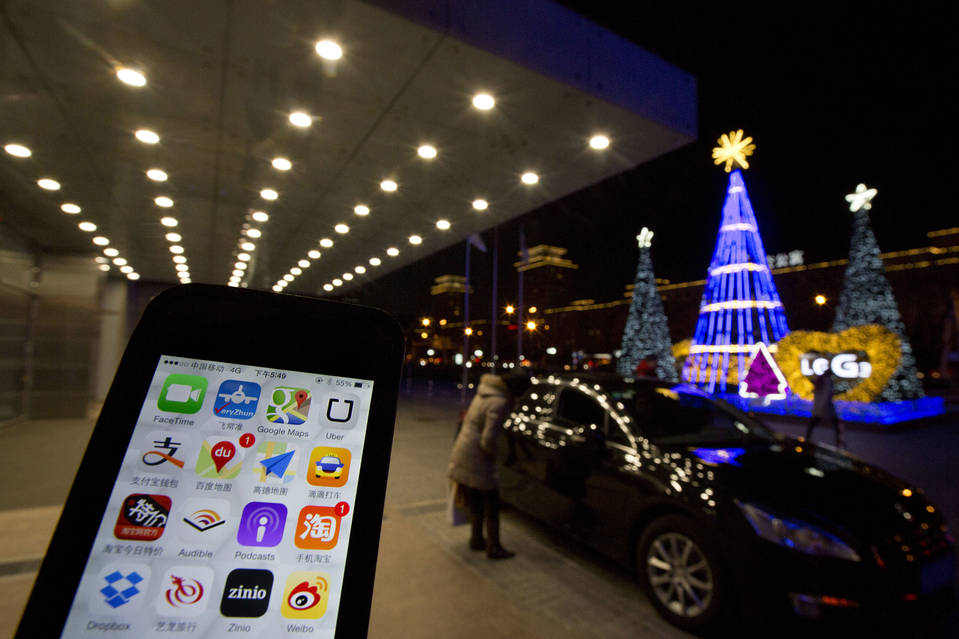 2015 has seen a wave of strikes and protests by Chinese taxi drivers, including one incident in Beijing when ten publicly swallowed pesticide to protest working conditions. On Friday, a clash between Hangzhou’s taxi drivers and others for U.S. taxi-app company Uber escalated into a large-scale protest. Colum Murphy at The Wall Street Journal reports that Uber warned its own drivers to stay away, threatening to use GPS to locate and punish those who disobeyed:

In two short messages sent to Uber drivers in Hangzhou and circulated online—verified with Uber in China by The Wall Street Journal—Uber urged its drivers not to go the scene and instructed those already there to leave immediately. Uber said it would use GPS to identify drivers that had refused to leave the location and cancel its contracts with them.

In a statement issued Saturday, Uber also said one Uber driver involved in an incident during Friday’s confrontation was licensed and had cooperated with the Hangzhou authorities. The company was strongly against any extreme behavior that could affect harmony and stability, the statement added. [Source]

Earlier last week, police intervened in another protest in Guangzhou after a sting operation on Uber’s local rival Didi Kuaidi, which is currently seeking US$1.5 billion to help it beat the American firm. Quartz’s Josh Horwitz reports that, while it has encouraged drivers to strike in support of its interests in the U.S., Uber warned those in Guangzhou not to participate in any form of protest or demonstration:

[…] According to business magazine Caijing, a transport bureau official hailed a high-end vehicle through Didi Kuaidi, got in the car, and then promptly asked for the driver’s ID and announced he would impound the vehicle (link in Chinese).

What followed was what Chinese media is calling a “mass incident”—a special term used to describe disruptive protests that carries political baggage. Dozens of Didi Kuaidi drivers who apparently caught news of the attempted sting surrounded the vehicle, waving signs in support of Didi and demanding the official, who was inside the car, let the driver off the hook. The mass of supporters blocked traffic, and police arrived to break up the crowds, photos posted on Sina Weibo (log-in required) show:

[…] According to Caijing, around the time of the incident, Uber sent out a stern statement to its drivers, warning them that it does not condone public demonstrations. A spokeswoman for Uber in Beijing wouldn’t confirm whether or not the statement had been sent. But her description of the company’s stance towards public protests hits all the marks for party-approved rhetoric.

“We firmly oppose any form of gathering or protest, and we encourage a more rational form of communication for solving problems,” she told Quartz. [Source]

At Tech in Asia on Monday, Charles Custer noted yet more protests in Wuhan:

On Monday, a similar scene played out Wuhan, where Caixin reports and videos show bystanders and drivers protesting authorities as they attempt to arrest a private-car driver. The situation reportedly got out of control, with police forced to fire warning shots in an attempt to disperse the crowd.

Like last week’s protests in Guangzhou, both incidents this weekend were sparked by the arrest of a private-car driver for operating an illegal cab. And both incidents also led to demonstrations so large that riot police had to be called in to manage the crowds. Uber is apparently already spooked enough that it’s threatening to fire drivers who participate in protests, and with good reason. If things are regularly escalating to the point that riot police need to be called for what should be routine traffic enforcement, Chinese authorities may consider cracking down hard on the source of all these protesters: private-car ridesharing apps like Uber. [Source]

The protests follow police raids on Uber offices in China last month. Despite these setbacks, chief executive Travis Kalanick claimed this week in an emailed announcement that the company is expanding rapidly in China. Tim Bradshaw at FT reports:

Uber drivers are making close to 1m trips every day in China, almost as many as on the entire ride-hailing service globally just six months ago, as it pours huge resources into one of its most challenging markets.

The San Francisco-based company hopes to buck the trend of US tech companies that have failed to crack the lucrative and fast-growing Chinese market by investing more than $1bn there this year.

[…] Mr Kalanick said in the email Uber plans to launch in 50 of the more than 80 cities with more than 5m residents over the next year, after first arriving in China in February 2014. [Source]

A report in The New York Times cited a more modest estimate of “more than 100,000 rides a day in China, according to two people with knowledge of the company’s internal metrics.” But Quartz’s Josh Horwitz reported that even these figures for Uber’s performance in China may be distorted:

[…] Chinese Uber drivers have been logging in fake rides and signing up for multiple Uber accounts in order to nab the company’s cushy bonuses, according to various reports. Sometimes they even involve accomplices who pretend to be passengers, but go no where.

According to business news website iFeng, part of the independent Phoenix Television group, Uber has been offering generous incentives to drivers who ferry passengers on The People’s Uber—the name for the company’s peer-to-peer service in China (known as UberX in most markets and UberPop in Europe). By one account, Uber was handing drivers 300 yuan (about US$50) for every 30 trips and 400 yuan for every 40.

[…] Accomplices can sit in their apartments, disable location settings, and specify a pickup not far from the actual location of driver’s vehicle, the report said. The driver then accepts the hail, and goes on a trip without a passenger. After the accomplice approves payment, the driver will – hopefully – pay back the fee and share a cut of the bonus. It’s not the most clever get-rich scheme on the planet. But for drivers, it’s better than waiting for a hail in a parking lot.

Other Chinese drivers appear to be circumventing Uber’s system for signing up new drivers by signing up for accounts with fake credentials, in order to grab first-time driver bonuses over and over again. [Source]

Meanwhile, He Huifeng at South China Morning Post reports that Chinese police have filed the country’s first sexual assault claim against a driver of a car-hailing app after he allegedly raped a woman in Guangzhou. The case has raised further questions regarding regulation.

A young woman has reported being sexually assaulted in a hotel room in Guangzhou by the driver of a car-hailing app, local police said on Monday.

It is the first case of its kind to be publicly reported on the Chinese mainland since the contentious apps were introduced there a few years ago.

[…] It comes at a time when car-hailing apps like Uber and Kuaidi Didi have been beset by problems in China. They were named illegal by the national transport authority earlier this year.

[…] The status of such car-hailing apps in China remains something of a grey area. Although deemed illegal, the regulation has not been tightly enforced, which sparked the protests. [Source]