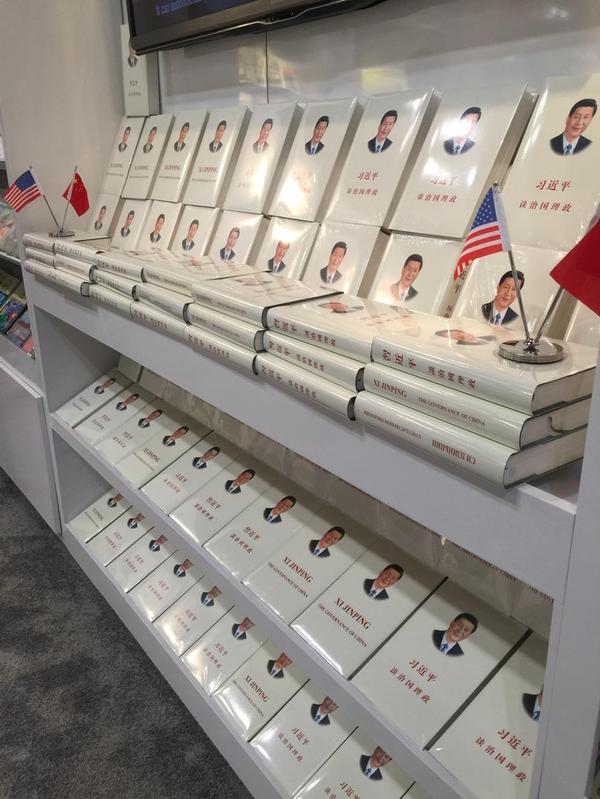 The who’s who of the U.S. publishing industry are gathering today in New York for the 2015 BookExpo America (BEA), the largest annual book trade fair in the country. At this year’s event, China is the “Global Market Forum Guest of Honor,” and 500-person government-sponsored delegation of Chinese publishers, authors, and high-ranking government officials will be in attendance.

China is our Guest of Honor for the Global Market Forum! Check out their setup in the a Crystal Palace! #BEA15 pic.twitter.com/fiI0QKnMY0

.@BookExpoAmerica opens on Wed. Nearly 10,000 kinds of Chinese books will be displayed at #BEA15. pic.twitter.com/1EdhLrJESL

@CDT by contrast at 2009 Frankfurt Book Fair when China was country of focus, leader whose work was displayed was retired one, Jiang Zemin

A logical choice by BEA organizers: China’s book market is currently the world’s second largest (after the U.S.), and China publishes more books each year than any other nation. The massive and growing Chinese publishing industry is subject to the same tight censorship facing all media in China, and all publishing houses must obtain license from the General Administration of Press and Publication. Ahead of this year’s BEA, PEN America released a report warning foreign authors of what might be sanitized in a mainland Chinese edition, and offering a set of recommendations for those looking to China. (The report sparked a familiar dialogue of varied opinions on how to navigate in China. See a New York Times debate with contributions ranging from “solidarity [with those living within China’s tight controls] demands resistance, not acquiescence,” by Indiana University’s Elliot Sperling; to “to cut out a fifth of the world’s population […] from the potential market for a book is self-defeating,” by OR Books publisher John Oakes; also see more authors’ input at the ChinaFile Conversation “Censorship and Publishing in China.”)

Yesterday on their website, PEN posted an interview with China scholar Perry Link, who wonders what ratio of naïveté to profit-motivation led BEA to choose China as their honored guest, notes the exiled and imprisoned writers absent from the government-sponsored Chinese delegation, and analyzes the delegation’s chosen focus sessions and their potential to misrepresent the social and political complexity of Chinese society:

What strikes you when you read the plans for BookExpo America’s focus on China?

The main question that comes to my mind is what the American side thinks it’s doing.  Publishers like to make money, and there are a lot of readers in China, so a commercial motive provides some of the answer. Naïveté, which dies hard in American views of China, can also go part-way in explaining why the top people at major U.S. publishers and even the president of a major U.S. university would agree to speak at an event like this—”engaging with the other side”—without looking squarely at the fact that this “other side” harasses and imprisons many of its best writers and intimidates the populace as a whole into self-censorship that distorts public presentation of what Chinese think about their country and the world.

Some of the best writers, including Liu Xiaobo, the Nobel Peace Prize Laureate, are in prison.  Many others of the best are in exile: Gao Xingjian, Liao Yiwu, Su Xiaokang, Zheng Yi, Ma Jian, and others.  Two of the most penetrating contemporary Chinese writers, Ha Jin and Li Yiyun, write in English in order to avoid not only censorship but the subtle self-censorship that the very language of “the other side” at this book fair imposes. […][Source]

The Washington Post has published an op-ed by PEN American Center executive director Suzanne Nossel, in which she calls on U.S. publishers to stay true to principles of free expression rather than succumb to the temptations of mainland profits. As a cautionary example, Nossel references Hollywood film studios and their increasing willingness to cater to government sensitivities or bend to the blatant demands of censors in order to access China’s market:

But China’s outwardly vibrant literary culture masks a harsh reality. In the Chinese government’s battle to control information, publishing is a heavily fortified line of defense. China has 580 official state-controlled publishers and no fully independent ones. Regulators license publishers, censor books and close defiant houses. References to the Tiananmen Square massacre are expunged to the point that many Chinese born after those killings do not even know they happened. Books that criticize the government or speak about persecution of minorities such as Tibetans and Uighurs are also banned. Chinese editors enforce the rules vigilantly. If they let an offending passage through, they can be put out of business. […]

[…] For American publishers, defending free expression has been a core value that has also made good business sense. Publishers have fought book bans, defended libraries against government snooping and donated generously to free-expression causes. As China’s influence widens, U.S. publishers face choices between principles and profits. Hollywood studios now invite government censors onto film sets such as “Iron Man 3” so that movies pass muster in China; American writers and editors self-censoring in the original English to anticipate Chinese government mores may not be far behind. Venerable U.S. publishers at the forefront of engaging China should commit to a publisher’s Hippocratic Oath aimed to ensure that, at the least, their involvement in China does not further harm free expression. [Source]