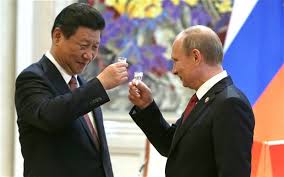 With Xi Jinping’s VIP seat at Russia’s Victory Day parade, joint naval exercises in the Mediterranean, and 32 signed bilateral agreements, Russia and China appear to be on the road to further shoring up historically fraught relations. Among the recent agreements is one in which both countries pledge not to launch cyberattacks on the other. Olga Razumovskaya writes for the Wall Street Journal:

According to the text of the agreement posted on the Russian government’s website on Wednesday, Russia and China agree to not conduct cyber-attacks against each other, as well as jointly counteract technology that may “destabilize the internal political and socio-economic atmosphere,” ”disturb public order” or “interfere with the internal affairs of the state.”

Western sanctions against Russia over the crisis in Ukraine have caused Russian officials to re-evaluate areas of critical dependency on Europe and the U.S., and increasingly turn to the east. Russian lawmakers have also campaigned for tighter control over the Internet following the revelations by former US National Security Agency contractor Edward Snowden. President Vladimir Putin, meanwhile, has called for moving key online infrastructure into Russia from overseas, complaining publicly last year that the Internet began as “a CIA project.”

Friday’s agreement is the latest sign that Beijing and Moscow favor changes to global Internet governance that would reduce the traditional role of the U.S. Russia is also preparing an action plan in case the Russian segment of the Internet was shut down from the outside, Russian minister of communications Nikolai Nikiforov said last year. [Source]

According to a report by Andrew Roth of the New York Times, the cyber agreement includes much that has already been covered in previous agreements, but does include one new aspect:

Alexander Salnikov, a deputy director of the Moscow-based Institute of Information Security, said that “perhaps 70 percent” had been borrowed from a previous agreement under the Shanghai Cooperation Organization, but added that language protecting internal sovereignty in cyberspace was novel.

Andrei Soldatov, an information security expert and author of a scheduled book on Russian Internet surveillance, played down the agreement, saying it was directed mainly to “send a signal to the U.S.” [Source]

Since last year, Chinese authorities have promoted the idea of “Internet sovereignty” to justify their control of the Internet within China’s borders. In January, China submitted an International Code of Conduct on Information Security to the U.N. together with Russia, Kazakhstan, Kyrgyzstan, Tajikistan and Uzbekistan. The second draft of a proposed security law also includes a clause on “Internet sovereignty,” Reuters reports:

The standing committee of the National People’s Congress (NPC), China’s legislature, reviewed a cyberspace “sovereignty” clause in a proposed national security law, according to a draft posted online this week after its second reading in late April.

The country must “achieve security and control in internet and information core technology, key infrastructure, and important data and information systems”, it said, as well as strengthen internet management and punish internet attacks. [Source]

Read more about the draft security law, via CDT.

Ahead of Xi’s visit to Russia, Xinhua released a propaganda video in which Chinese people lavished praise on Russia and Putin: