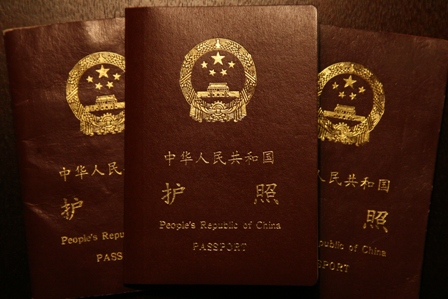 Following reports last week that all residents of Xinjiang’s Ili Kazakh Autonomous Prefecture were required to hand their passports in to authorities by May 15, the AP’s Christopher Bodeen takes a wider look at the practice of denying passports to government critics and members of certain ethnic minority groups:

Uighurs and Tibetans, who together number about 16 million inside China, have increasingly complained about difficulties obtaining passports, including the need for government approvals that members of the majority Han group aren’t subject to.

[…] While the government says only that the restrictions are to maintain social order, minority activists and critics of the one-party communist system believe politics are the real reason.

[…] Cheng Fan, a veteran of the 1989 student-led pro-democracy movement, has never been able to obtain a passport. Like many present or former government critics, his applications are answered with a one-page document from police stating that a “relevant Cabinet agency” has ruled that if allowed to travel abroad, he would “pose a threat to national security or cause serious harm to national interests.”

[…] It’s not known exactly how many Chinese citizens are denied passports, had them seized or were simply turned away at the airport when attempting to board international flights. The Public Security Ministry’s Entry and Exit Supervision Bureau did not respond to questions from The Associated Press and the Foreign Ministry and Tibetan officials said they had no information on the issue.

Concerns over Uighurs have been heightened by the growth of global jihadi groups, said Dru Gladney, an expert at Pomona College. Yet, travel restrictions will likely only add to the “pressure cooker” of ethnic discontent in Xinjiang, he said. […] [Source]

Last week, Li Tingting (aka Li Maizi), one of the five women’s rights activists released in April after more than a month in detention, tweeted that her passport had been withheld by authorities:

The police returned my daily goods. But take my passports away! Why?! pic.twitter.com/WNYKrHUniy

For more on the political withholding of passports, ethnic tensions, regional violence and the ongoing crackdown on terrorism in Xinjiang, or Beijing’s policies in Tibetan regions of China, see prior coverage via CDT.