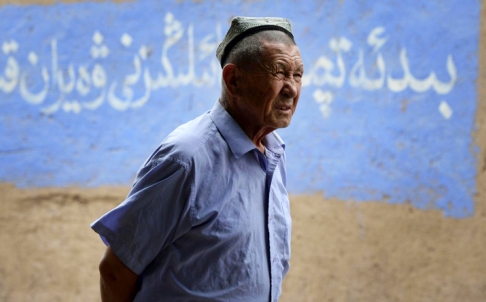 A directive circulating in ethnically diverse Ili (Yili), Xinjiang, has called for all residents of the prefecture to turn over their passports. The New York Times’ Edward Wong reports:

The April 30 notice says that if residents do not hand in their passports by Friday [May 15], the local police department will notify the entry and exit office of the Public Security Bureau to have the passports voided.

A police officer named Kahar whose phone number was listed on the notice confirmed the order when called on Thursday. He said the order applied to all residents, regardless of ethnicity, and covered the prefecture.

[…] [Amnesty International’s East Asia director] Mr. [Nicholas] Bequelin said the restrictions were part of an array of counterinsurgency measures that have been rolled out by the authorities since Xi Jinping, the Chinese president and head of the Communist Party, began holding a series of meetings on Xinjiang policy since 2013.

“Restricting the mobility of populations that the state views as being ‘infiltrated’ by subversive elements is a key aspect of counterinsurgency policies around the world, historically and today,” Mr. Bequelin said. “The goal is to strengthen control over the target population, prevent support from areas outside of the state sovereign borders, and facilitate state propaganda work by limiting the information sphere.”

“These restrictions are deeply problematic,” he added, “reinforcing the sentiment of alienation of ethnic Uighurs, and fueling the feeling of being second-class citizens, suspect in eyes of the state simply because of their ethnicity.” [Source]

In response to an upswing in violence in Xinjiang and elsewhere in China, an ongoing crackdown on terrorism was launched last May. In addition to heightened security measures, the campaign has included a series of policies seeking to counter the influence of Islam—an extreme interpretation of which authorities blame for the mounting violence—by regulating religious custom and dress. Early this month, it was reported that Muslim-owned shops and restaurants in Aktash, Hotan had been ordered to sell and prominently display alcohol and cigarettes. In an interview with Deutsche Welle, Xinjiang scholar and historian James Millward describes the Aktash alcohol/tobacco policy and other new religious regulations in Xinjiang as a “misdiagnosis of the problem of Uyghur discontent and separatism”:

It is difficult for an outsider without direct access to Xinjiang to comment on the impact of either “strike hard” security measures or the policies against “Islamic” customs. Certainly I and many other observers outside China – and some in China – feel that policies targeting peaceful aspects of Islamic practice such as fasts, beards, veils, food taboos etc, are counter-productive because they will anger the broad population of Uighurs, the vast majority of whom are not engaged in and don’t support terrorism or even political Islam.

These policies make it easier for critics – such as al Qaeda or “Islamic State” – to say that the Chinese state and Communist Party are anti-Islam, and this could even help with such groups’ recruiting efforts. Other countries have tried policies that target Islamic symbols – one thinks of France’s bans on the veil for Muslim women, for example – and few would see those policies as successes, given continually worsening tensions in those countries.

The Chinese policies targeting Islamic customs seem to reflect a misdiagnosis of the problem of Uighur discontent and separatism as entirely due to outside ideology sneaking in, like a contagion. It is clear to many outside observers, and stated resoundingly by Uighur exile groups, that extremist religion is only one element in Uighur discontent.

What other aspects come into play? […] [Source]

Following up on a slew of English-language media coverage of the Aktash tobacco and alcohol policy, an op-ed from China Daily castigates the Western media for misunderstanding and misrepresenting the situation in Xinjiang:

Some recent reports in the Western media have brought Aktash, a small village in Hotan, Xinjiang Uygur autonomous region, in the limelight. Quoting some individuals, Radio Free Asia recently said the local government has forced shop and restaurant owners to sell liquor, which is against the teachings of Islam.

Xinjiang has always been a sensitive issue for the Western media. But since some of the foreign media outlets don’t have even the basic knowledge of the situation in Xinjiang, they tend to quote partisan or misleading sources leading to distorted reports. Worse, some Western journalists, having never visited the region, conjure up reports from imagination that are full of prejudices. […] [Source]

Due to the strict control over the media narrative exercised by authorities in Xinjiang, journalist access to Xinjiang is limited, and Western media outlets often rely on U.S.-government funded Radio Free Asia as a source for developments in the region, as many did while covering the alcohol and tobacco directive. Today, RFA reports that two successive suicide bombings in Hotan left six dead and four others injured this week:

[…] Although the security checkpoint is stationed in front of the town’s detention center and next to a birth control center, hospital and the county bazaar, the area did not contain many people other than police when the two bombs were detonated, Toxtixelil said.

“Those who man the checkpoint are primarily assigned to checking for ‘extremists’ who wear veils and have beards,” he said.

[…] Police have detained more than 200 people, including relatives of the attackers, most of them from Dol township, who were in the county bazaar when the two attacks occurred, [Lop county deputy police chief Memtimin Alba] said.

[…] “We can assume that they were trying to send a signal to our government about their anger over the restrictions placed on the wearing of veils and beards,” he said. “That is why they selected the checkpoint as their target of attack.” [Source]