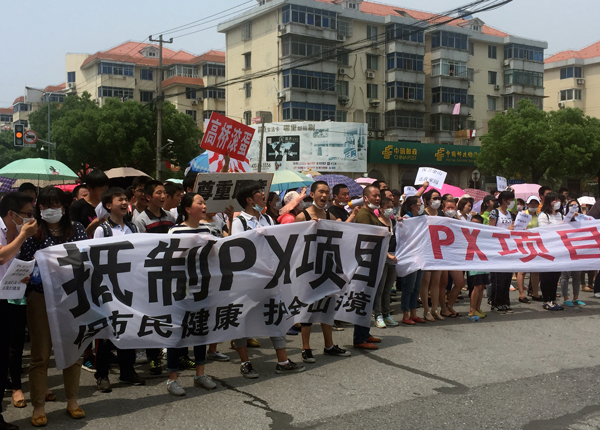 At RFA, Wei Ling and Wen Yuqing report that a protest against a paraxylene (PX) plant rumored to be on the slate in Shanghai’s Jinshan District has continued into its fifth day:

“This has been going on for five days now, and I am guessing that there are about 50,000 people here today, even more than yesterday, when there were about 40,000,” a Shanghai resident who declined to be named told RFA.

The protests have continued since Monday, in spite of assurances by the Jinshan authorities that no PX plant is planned for Jinshan, which is already home to a chemical industrial park.

Protesters believe that the authorities are planning to relocate an existing PX plant from the Gaoqiao industrial park to Jinshan.

Friday’s protest appeared to go off peacefully, with some police officers visible in photographs, but no clashes, according to the Shanghai resident.

“We are walking very peacefully … Everyone is here to protect their own rights and interests,” the resident told RFA. [Source]

The local government denies any plans to build a PX processing plant, at least in the near future. From the Shanghai Daily:

The protest was held after the government decided to invite the public to review its latest plan for the chemical industrial zone’s expansion after some people had said online that there would be a paraxylene plant.

But the environmental assessment report released online by the Shanghai Academy of Environmental Science, with the authorization of the management committee of the Shanghai Chemical Industry Park, showed that no PX program was included in its development plan before 2025.

The district government released a letter to the public on Monday, reaffirming that there was no PX plant in the current plan and that there would not be any such program in the future.

Zhou Minhao, director of the management committee of the Shanghai Chemical Industry Park, confirmed this when interviewed by Jinshan News, a local newspaper. [Source]

[See below for videos of the protests.]

PX is used in plastics, such as polyester. The safety of PX has been debated, but fears about the health effects of the chemical, especially during its manufacturing process, have sparked protests all over China, starting with a successful campaign to keep a PX processing plant out of Xiamen, Fujian in 2007. That plant was eventually relocated to the less affluent Zhangzhou, about 43 miles inland from Xiamen. An explosion at the Zhangzhou plant this April forced 30,000 people to be evacuated from the area.

At Forbes, the University of Nottingham’s Samantha Hoffman and Jonathan Sullivan write that environmental protests have the potential to build across social and geographic borders. Official statements are often considered untrustworthy, breeding fears sometimes out of proportion with actual risk. The authors cite an earlier explosion at the Zhangzhou plant in July 2013 as a case-in-point:

The government’s search for a solution is likely to prove fruitless; its only option appears to be maintaining social unrest at a manageable and local level. For these environmental protests are striking at the heart of the Chinese governance model of ‘adaptive authoritarianism’ and exposing its limitations. The Party’s strategy in dealing with major environmental disputes that bring together local communities across all ages and classes has often been one of short-term appeasement. But when governments are known to make ad-hoc concessions to quell disorder it encourages further episodes of contention.

[…] The government has tried, and failed, to convince the public that PX projects are safe. Partly this is due to the government’s typically clumsy delivery, for instance a month before the 2013 explosion in Zhangzhou, the People’s Daily claimed that PX was “no more harmful than a cup of coffee.” Statements like these are only likely to make residents more skeptical of official pronouncements.

More salient are the low levels of trust— or rather the active mistrust— inspired by Chinese central and local governments, and companies. There is no evidence that long-term exposure to PX causes cancer, one of the protesters’ key anxieties, but Chinese have good reason to be disbelieving of official sources—the cover up and withholding of information about the deadly SARS virus in 2003 is just one example. [Source]

Video of the Shanghai protests have been posted on YouTube: