What the West Should Know About Xi Jinping 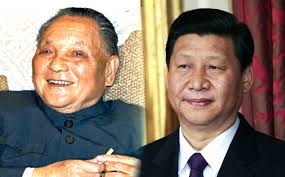 In the New Statesman, Jonathan Fenby provides a rundown of Xi Jinping’s leadership, the ways in which he has amassed power, and the challenges he is facing as he becomes a, “strongman who defends the PRC’s Leninist form of bureaucratic state capitalism”:

Projecting a folksy image domestically as “Xi Dada” (Uncle Xi), he appears popular, as a leader with ambitions that match China’s economic weight, the strongest chief of the world’s most populous nation since Mao Zedong. Like the Great Helmsman, Xi knows how to play to perfection the front-line role in his country’s political system – Leninism with Chinese characteristics. (Though paramount leader after winning the power struggle that followed Mao’s death in 1976, Deng Xiaoping preferred to operate through others.) With his tenure stretching to 2022, Xi does not have to worry about elections or obstructive legislatures; what matters is controlling and strengthening the monopoly movement that has ruled the People’s Republic of China (PRC) since 1949. After taking over the Party leadership at the end of 2012, he swiftly pursued the centralisation of authority and set up four top-level national bodies under his chairmanship to add to the usual top three posts of Party general secretary, state president and chair of the Central Military Commission. He has no rivals and has ensured control of a vital power base by reshuffling top commanders of the People’s Liberation Army (PLA) to promote generals close to him.

[…] For all his power, Xi confronts a long string of challenges; indeed, he has indicated that he feels he needs great authority because of the scale of problems facing the regime. China has major economic imbalances. The leadership has to manage slowing growth, deflation, excess industrial capacity and a mountain of debt incurred by local governments for projects unlikely ever to provide a decent return on ­capital. To ensure sustainable growth, it needs to reduce the dependence on exports and fixed asset investment and to increase domestic consumption – but the rate of consumption growth remains weak. Prices have fallen on the property market, into which many Chinese poured their savings. The recent stock-market boom has run ahead of itself and international investors showed what they thought early this month by declining to include in the benchmark global MSCI Emerging Market Index stocks that are listed on the mainland, rather than in Hong Kong. For all its adaptation of inventions from abroad, China is not good at original innovation. It also faces competition from lower-cost producers and needs to move up the value-added chain of manufacturing.

The second generation of the urban middle class, which holds the key to the PRC’s future in many ways, and which has never known anything but strong growth, is more questioning than its parents. Social media has introduced conversations that are outside the range of the official channels, and too numerous for the censors to keep track. Chinese citizens make more than 100 million trips abroad each year and see the liberties democracy can bring.

[…] The greatest problem facing the Chinese leadership is simple. What is the Communist Party of China for and where does it derive its legitimacy? That raises some very knotty issues. [Source]