China and the Deep Blue Sea 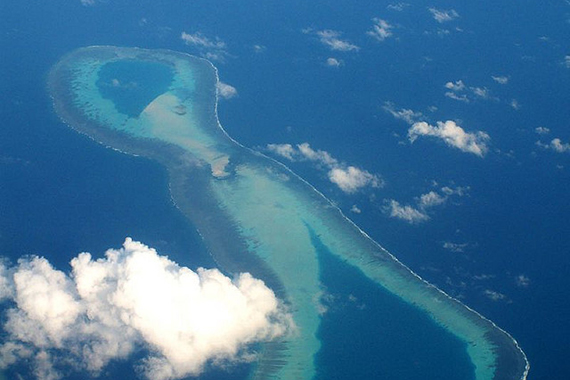 A longstanding and deeply-entrenched dispute between China and several of its neighbors over territorial rights in the South China Sea has reignited this week with the release of satellite images showing Chinese construction on a reef, after the government claimed they would cease such activity. So far, it is estimated that China has reclaimed at least 2,900 acres of land in the South China Sea. Steven Mufson at the Washington Post reports:

Commercial satellite photos taken Tuesday for the Center for Strategic and International Studies show that China is flattening, rolling and putting gravel on an area the size of a military runway on Subi Reef, a once-submerged shoal that Beijing has built up into an area suitable for a military base. The flattened area is about 200 feet wide and nearly 1.4 miles long but is expected to grow and be covered with asphalt, say China experts who have examined the satellite photos.

On Mischief Reef, China has also completed, and started pouring fill into, a retaining wall in a space nearly two miles long — part of a process that is identical to what was done earlier on Subi Reef and Woody Island, where an airfield has been completed, the experts say.

The new construction seems certain to strain the meeting between Xi and President Obama, whose national security adviser, Susan E. Rice, was recently in Beijing. The United States has urged China to stop work in the region, and Beijing said in August that it would halt reclamation. But the satellite photos show that construction continues. [Source]

Reuters reports on the foreign policy implications of this discovery as Xi prepares for his first state visit to the U.S.:

The evidence of continued dredging in the Spratly archipelago could complicate a visit to the United States by Chinese President Xi Jinping next week, when U.S. concerns about China’s assertive pursuit of territorial claims in Asia are expected to be high on the agenda.

Bonnie Glaser, of Washington’s Center for Strategic and International Studies think-tank, said images taken in early September showed dredging activity at both Subi Reef and Mischief Reef in the Spratlys.

The dredgers at Subi could be seen pumping sediment on to areas bordered by recently built sea walls and widening the channel for ships to enter waters enclosed by the reef.

The Washington Post has compiled images of the transformation of Fiery Cross Reef from a natural marine habitat to a military base. While the geopolitical implications of China’s actions have been the focus of much media attention, less attention has been paid to the ecological effects of building artificial islands atop natural reefs. For Project Syndicate, James Borton and Nguyen Chu Hoi write about the environmental impact and offer suggestions of how the world should respond:

What has been less discussed is the project’s environmental impact, which borders on catastrophic. China’s activities are endangering fish stocks, threatening marine biodiversity, and creating a long-term threat to some of the world’s most spectacular sea life.

Thousands of coral reefs, seagrass beds, and other shallow-water ecosystems are rapidly being destroyed and buried as China’s leaders rush to stake their claim to the region. The land reclamation project is undermining the ecological connection between the Spratly Islands and the South China Sea, choking off the supply of nutrients upon which these ecosystems depend.

Moreover, China’s bellicose stance, together with the undefined ownership of the region and its fish stocks, has led to destructive overfishing, degrading the marine ecosystem and threatening endangered species, including sea turtles, sharks, and giant clams. Since 2010, the fishery reserves in the Spratly Islands and the western part of the South China Sea have been reduced by 16 percent.

Approximately 300 million people depend on the South China Sea’s marine resources for their livelihoods; should China continue on its current course, the risk of massive economic dislocation will grow. But the South China Sea is an important body of water for the entire world, not only for the countries that border it. It is an essential international maritime transportation route—connecting the Indian Ocean to the Pacific Ocean—through which roughly 300 vessels, including 200 oil tankers, pass daily. [Source]

In July, Johnny Langenheim wrote in the Guardian that China could take the lead on a treaty similar to the Antarctic Treaty to protect the waters and marine life in the South China Sea:

China also claims its island building activities have caused only minimal, recoverable damage, but [marine biologist John] McManus, an expert in reef ecology, doubts this is the case. “The reef crest is a tiny thing about the same height as the tide range,” he explains. “That’s what is protecting everything – waves lose more than 90% of their energy when they hit the reef crest, reef flat and reef slope.” What’s more, this is an area that is prone to typhoons. “And you can’t build anything on an atoll without a wave-breaking crest in a big storm region.”

McManus concedes that if you build behind the reef crest, the impact could technically be minimal. “But that’s provided you haven’t messed with the ecosystem that is continually building the crest – then it could wear down and wash away.” China and to a lesser extent the other countries contesting the Spratly Islands, appear to have been dredging sand from within atolls, behind the fringing reef, effectively reclaiming land from the structure itself. “That sand is not a desert – it’s an important part of the atoll,” says McManus. “And we’ve found at least 20 areas that are being dredged like this.”

Dredgers sweep back and forth, creating clam shell patterns in the sand that are clearly visible by satellite. In the process, they destroy whatever lives there, including reef-building organisms, turtles and giant clams, while sending up plumes of corrosive sand and sediment that settle on surrounding reefs, killing them, McManus explains. For the many scientists who are predicting that coral reefs globally are in danger of disappearing by as early as the middle of the century due to bleaching, ocean acidification and rising seas, the reclamation is comparable to switching off an ailing patient’s life support.

[…] “These are some of the most beautiful reefs I’ve ever seen with some of the highest levels of biodiversity in the world,” [McManus] says. “And they’re covering them with sand to build airports on them.” Instead of a proliferation of military bases, there could be dive resorts and live aboard boats operating in these waters. [Source]