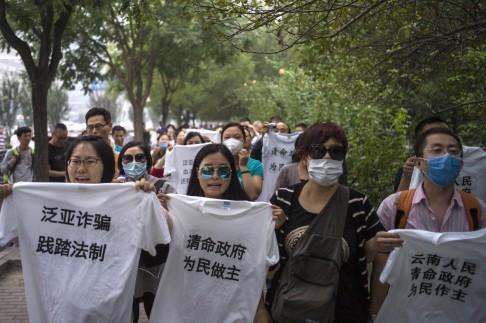 Investors angered by frozen assets in the Kunming-based Fanya Metals Exchange rallied outside the China Securities Regulatory Commission in Beijing, saying they had been cheated out of their savings. From AFP:

Several dozen investors – surrounded by police – stood outside the office of China’s top anti-graft agency complaining they were tricked by the Fanya metals exchange.

[…] The mainland’s main financial institutions are government-run, and many Chinese expect the state to step in when the investments they have chosen go bad.

“I’m in debt – hundreds of thousands that I put in were borrowed money,” said Peng, who is unemployed and in his 50s. “This is outright fraud and robbery.” [Source]

Bloomberg covers a Caixin report on the cause of the investor anger:

Fanya in July stopped investors from cashing out of investment products that promised a fixed rate of return of 13.68 percent and guaranteed principal, Caixin said, citing unidentified investors. The exchange has faced liquidity problems from earlier this year after a drop in rare metals prices. Indium, which was cited in the report, has fallen almost 60 percent in the past year, Metal Bulletin data shows. [Source]

The protests have been ongoing for several months in various cities. On August 22, angered investors from around the country organized by social media and gathered in Shanghai to forcibly take the exchange founder to the local police station, where he was released without charge. From Zheping Huang at Quartz:

Investors from around the nation joined the capture, having planned it using messaging apps and social media. They surrounded Fanya founder Shan Jiuliang as he attempted to check out of the hotel, manhandled him into a private car, and delivered him to the nearest police station.

[…] At the station, with the police looking on, two investor representatives made Shan promise that their investments would not be affected by the market prices of minor metals, according to Futures Daily. On this basis, they agreed to deals enabling the investors to withdraw their funds at fixed periods from three to 12 months. Shan agreed to publish a draft on revised trading rules within the next week, and to ask for investors’ opinions. In the end, Shan was released without charge.

The Shanghai police did not open an investigation, but they said they would go to the Yunnan province, where Fanya is based, to inquire about possible fraud. That might not lead to much: Investors in Kunming, the province’s capital, told Futures Daily that local authorities and lawyers have been pressured to not look into or represent the investors’ cases. [Source]

Photos of Mr Shan’s capture and protests in Shanghai were posted to social media site Weibo. Mr Shan has not commented publicly, but his company denounced the raid.

“Violent acts against president Shan and our employees or the disturbance of our work are destructive of our work around solving the crisis,” Fanya Metals said in a statement on its website.

“This will only allow forces behind the scenes to profit and will greatly harm interests of all members.” [Source]

Protests against Fanya have been held in other Chinese cities as well. CDT Chinese has posted photos from a protest on September 19 in Shanghai.

In recent months, propaganda officials have tried to limit negative reporting on instability in the Chinese stock market and other financial news.