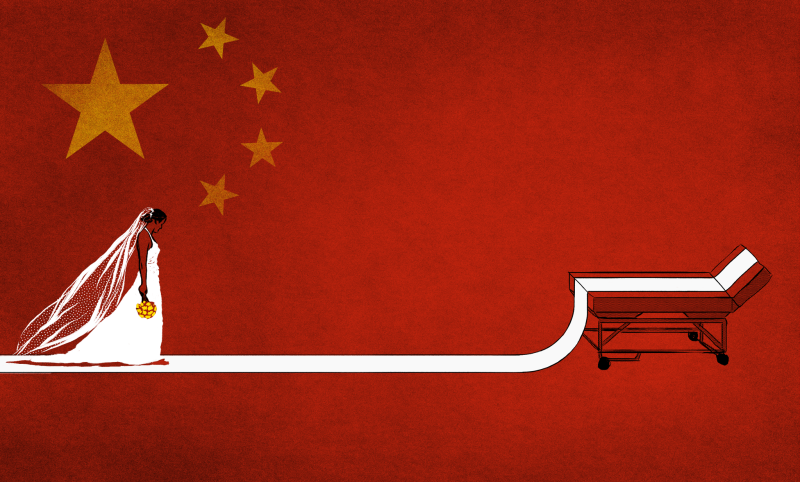 Following a public debate over the reproductive rights of single women and regulations which prohibit unmarried women from freezing their eggs, an article by Roseann Lake on Jezebel looks at the stigma and prejudice single women—especially those who are not virgins—face when getting routine gynecological exams in China:

26-year-old journalist Xinyuan Yu’s first visit to the gynecologist took place on one of these employer-provided health checks. Unaware that her marital status would determine which examinations she would be entitled to, she filled out the forms truthfully, and checked the box to indicate that she was unmarried. As she hopped onto the examination circuit and began going from exam room to exam room as if on one large production line, she realized that there was one room she hadn’t been assigned to, and approached the nurse at the door to ask why. “Are you married?” asked the nurse. “No,” said Xinyan. She was promptly shooed away without explanation.

[…] Ingrained in these anecdotes of visits to the gynecologist is an overwhelming indication that China—despite its formidable social and economic transformation—is still reeling from the aftershocks of a culture that has modernized very quickly, but in pockets. On a systematic level, the country continues to be stifled by traditional and often paradoxical mores.

For instance, though gynecological exams remain irregularly available, abortions are much more pedestrian. As Iris recalls, abortion was essentially a method of birth control for some of her high school friends; one girl had three before her 21st birthday. She mentioned that it was common for girls to go to “clinics” that advertised abortion services for the equivalent of around $50 USD.

Iris notes that the ads for these services most often appeared on cards or pamphlets that were distributed on the street, providing little information. “Not all women in China understand how to prevent pregnancy—it’s a subject people don’t like to talk about,” said Iris. “A bit less [abortion] advertising and more education would’ve gone a long way.” [Source]

Read more about women’s health in China, via CDT.