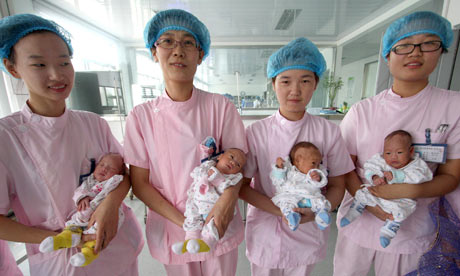 A longstanding regulation that prohibits single women from freezing their eggs gained renewed attention after actress Xu Jinglei recently announced that she had traveled to the U.S. to freeze her eggs in 2013. Richard Macauley reports for Quartz on the reasons for the ban:

China’s ban on freezing eggs is officially in place to prevent an illegal ova trade but—unfortunately for many—freezing eggs is also against the interests of the state. In recent years the government has been trying to encourage women to give birth, rather than to put off motherhood, and freezing eggs could act against that.

This is essentially because the government is concerned that there won’t be enough young people to drive GDP growth and take care of the country’s elderly, thanks to the one-child policy and the population bomb it’s created.

A senior official at the Shanxi province family planning bureau—which is responsible for enforcing the one-child policy—even called publicly for a “two-child” policy and for the strong encouragement of all couples to have children. That was met with criticism in China, but the government has been loosening the one-child policy, and it also has soft-power measures with which it can encourage couples to conceive. [Source]

Others see the restrictions as part of a broader morality campaign that stigmatizes women who have not gotten married and had children by their late twenties. Emily Rauhala reports for the Washington Post:

But there’s more to it. With China’s population pyramid shifting, the government is slowly easing up on the one-child policy, increasing the number of couples — married, heterosexual couples — that are permitted to have a second child.

But single women? No.

This reflects the Communist Party’s belief that a “harmonious family” (here defined as a married man and woman and legally registered child) is the bedrock of a “harmonious society,” says Leta Hong Fincher, author of Leftover Women: The Resurgence of Gender Inequality in China.

“The prospect of women being able to give birth on their own is very threatening to the moral order,” she said. [Source]

As Hong Fincher discusses in her book, official media and government organizations discourage women from putting off or shunning marriage and/or childbirth. From a recent report from Xinhua on the debate over egg freezing, for example:

Unmarried women are not allowed access to any assisted reproduction technique in China, and married women can only have their eggs frozen in two situations — when their husbands cannot provide sperm on the day when the eggs are harvested, or prior to the loss of ovarian function due to cancer treatment or radiation therapy. Egg harvesting can be problematic for women with existing health conditions.

A low success rate is another reason why the technique is not widely used, according to Lu Qun, director of assisted reproduction center at Sichuan Provincial People’s Hospital. Embryo freezing has a success rate over 60 percent, but less than 50 percent of frozen eggs are viable.

[…] China does not offer egg freezing to unmarried women because of concerns about illegal human egg trade. Plenty of infertile couples are in dire need of healthy ova, but finding a proper donor has limited their choices, so the ova shortage has resulted in a thriving black market.

[…] The national health and family planning commission suggests that women should get pregnant in their prime child-bearing years, between 24 and 29. Pregnancy at over 35 can be dangerous to both mother and fetus.

On What’s on Weibo, Manya Koetse writes about the reaction on Chinese social media to the regulations. The topic caught fire after popular blogger Han Han spoke up in defense of a women’s right to choose when and how she has children:

Famous Chinese blogger and writer Han Han (韩寒), one of the most influential people on Weibo, shares his thoughts on the issue. “Is it impossible to want a baby when you are not married? One cannot use one’s own eggs?”, he writes: “Why can’t women decide on their own whether or not they want to have children? And what if an unmarried woman does get pregnant, and they don’t get a ‘Permission to give Birth’? Then the child cannot even get a residence registration”.

With his Weibo post, Han Han strikes a particularly sensitive chord, not just because he addresses the issue of freezing one’s eggs and artificial insemination, but also because he raises questions about China’s ‘Permission to give Birth’. This certificate is necessary for the vast majority of people who want to have a baby in China. Without it, the child will not have a residence permit (hukou 户口), and as a consequence, will not be registered in China’s social system – meaning they cannot go to school or have any other societal rights. (For more information, read this excellent blog about giving birth in Chengdu by ChengduLiving.com).

[…] Freezing one’s egg cells, like IVF, officially falls under the category of ‘human assisted reproductive technology’, which is reportedly prohibited for single women according to China’s current law. User Zhao Lao Ai refers to a Zhihu message board on the issue, where lawyer Ji Hongwei says that he has not found any legal ground why freezing eggs should be illegal for single women. “After reading into the issue carefully,” the lawyer says: “I did not find any one of the conditions for ‘human assisted reproductive technology’ stating directly, or indirectly, that unmarried single women cannot make use of it.” The lawyer therefore wonders who is in charge of the Family Planning Commission, and on which law the conclusion is based that single women cannot have their own eggs inseminated.

The feminist group The Voice of Women’s Rights has issued a balanced and nuanced statement on Weibo, saying: “There are many social implications behind the pressure for women to bear children, and they cannot merely be solved through technical procedures. Freezing eggs is a costly and risky operation, with low success rates, and it does not necessarily brings women freedom in terms of child-bearing. However, it should be one of the options that women have.” [Source]

See CDT’s interview with Leta Hong Fincher about her book for a broader discussion on the topic of “leftover women” and women’s rights in China.