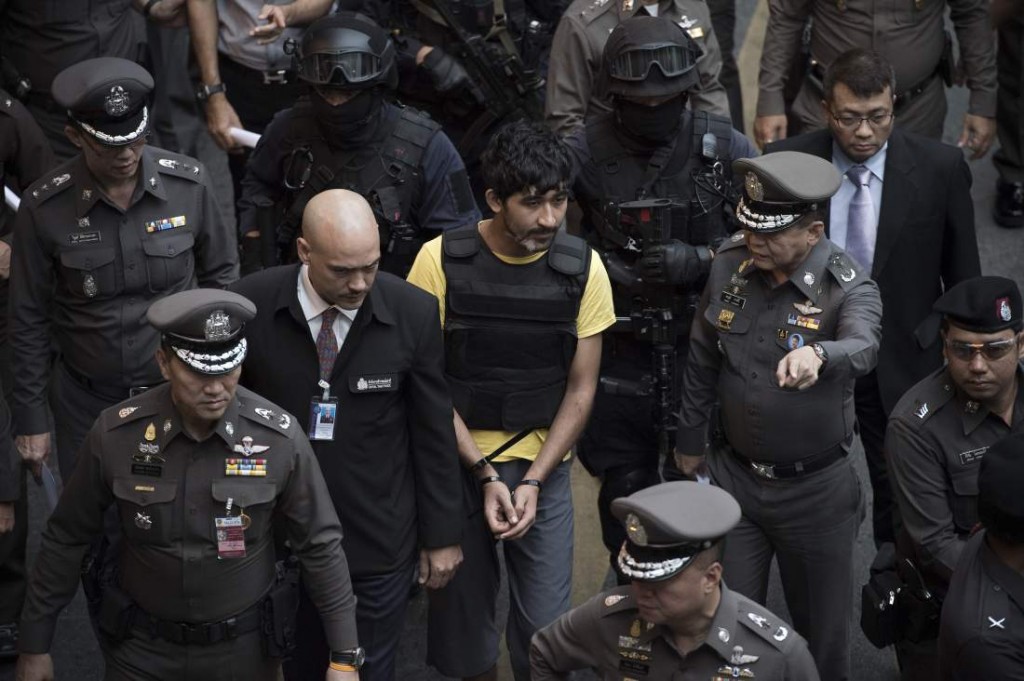 Thailand’s police chief has put out a warrant for the arrest of a Chinese citizen—and apparent ethnic Uyghur—who is allegedly linked to the August 17 bombing of the Erawan Shrine in Bangkok which killed 20, including five Chinese nationals. Police claim that the bombing was carried out in retaliation for a crackdown on human traffickers who helped Uyghurs leave China, and for the recent forcible repatriation of Uyghurs back to China, where rights groups feared they would face persecution. But many people remain skeptical of the police explanation. From Thomas Fuller and Edward Wong at the New York Times:

Speaking at a news briefing, Gen. Somyot Poompanmoung, Thailand’s chief of police, said the bombing had been carried out by a human trafficking network that “moved Uighurs from one place to another.”

Calling the bombing retaliation for the dismantling of the trafficking business and for the repatriation, he said, “Put simply, we destroyed their business.”

In general, the Thai authorities, concerned about their lucrative tourism industry, have been less than forthcoming about the case, at one point directing officials not to use the words Uighur or terrorism while discussing the investigation.

The police explanation of the motive has already been widely challenged. While the local news media and others have long suspected that the bombing might have been payback for the repatriations, Thai news outlets have expressed skepticism over the suggestion that it was tied to the crackdown on human trafficking. One Thai newspaper called the claim “unreasonable” because, if it were true, there would have been a more intensive crackdown on traffickers after the bombing. [Source]

While speculation has circulated about Uyghur involvement since the bombing, Thai officials have been hesitant to publicly name the ethnic group when discussing suspects, allegedly for fear of angering China. AFP reports:

If the police investigation is on track, “there is definitely a Uighur or radical Turkish national connection,” Zachary Abuza, an expert on Southeast Asian militant groups, told AFP.

Yet Thai police are bending over backwards not to use the words “Uighur” or “terrorism” largely, analysts say, for fear of putting off tourists or angering China — one of the junta’s few international friends.

That determination reached near comical proportions on Saturday, when a warrant for a key suspect named as Abudusataer Abudureheman, or “Ishan”, was issued.

Police said he was a Chinese national of Uighur ethnicity who left the country before the attack, only to rescind the word “Uighur” hours later and call on the press to drop the term entirely. [Source]

The current whereabouts of Abudusataer Abudureheman are unknown; Thai officials have said he traveled to Turkey, which Turkish officials have denied. From AP:

“There is no record of the suspect having entered Turkey,” the [senior Turkish government] official said in an email on condition of anonymity in line with office policy. “Nor have the Thai authorities informed us that a terrorism suspect was travelling to Turkey.”

Thai police had previously said the man, carrying a Chinese passport in the name Abudureheman Abudusataer, may have directed the Aug. 17 bombing of the Erawan Shrine. Investigations revealed that he left Thailand on Aug. 16 for Bangladesh, and police speculated that he might have gone to China.

However, national police spokesman Prawut Thavornsiri said that information gathered by Thai police and Bangladeshi officials showed that the man departed Bangladesh’s capital, Dhaka, on Aug. 30 and travelled to Istanbul in Turkey as his final destination, via New Delhi and Abu Dhabi.

“He departed Dhaka on Aug. 30 for Delhi by Jet Airways,” Prawut said. “From Delhi, he continued his travel to Abu Dhabi, and from Abu Dhabi he travelled on Aug. 31 to Istanbul. This is his final destination. It’s clear.” [Source]

Yet many questions about the attack, the suspects, and the possible motives remain unanswered. An investigation by The Diplomat’s Shawn Crispin earlier this month revealed that many sources inside Thailand believed the bombing was carried out by domestic assailants with possible involvement of foreigners:

Foreign envoys, top government advisers, former high-ranking officials, and private investigators who spoke to The Diplomat on condition of anonymity all point toward probable rogue security force involvement in the sophisticated yet locally attuned August 17 blast. The pipe bomb killed 20 and injured over 125 at Bangkok’s Erawan religious shrine. Hidden by multiple layers of deniability, official obfuscation, and patchy police work, the local masterminds likely acted in coordination with foreign criminals with prior links to wayward security officials to execute the politically sensitive attack, the same sources said.

The recent arrests of two suspects of unknown nationality and warrants issued for a handful of others is consistent with this narrative. The arrests have raised as many questions as they have answered about a motive. A police spokesman said this week the suspects were linked to a human trafficking “syndicate” and that the bomb may have been a “revenge attack” against a recent crackdown on the trade. Under intense international pressure, since July Thai prosecutors have indicted 72 people, including state officials and a senior military officer, for having links to foreign-linked people smuggling networks active in Thailand.

[…] Initial speculation that Islamic State or al-Qaeda orchestrated the attack has faded as neither terror group has claimed responsibility for the atrocity. Security analysts and media reports have instead linked the bomb to Thailand’s deportation in July of over 100 ethnic Uyghur Muslims to China. The theory is that a hybrid criminal-terror group staged the attack in revenge for their Turkic brethren’s mistreatment in Thai custody. Unconfirmed reports cited by diplomats indicate an unknown number of Uyghur detainees may have been shot and killed by Thai immigration police while protesting against their planned deportation to China.

There are holes in the theory, however, including high-level diplomatic doubts that Uyghurs could have so quickly hatched and executed such a sophisticated plot so soon after the deportations. China’s foreign ministry said days after the blast that Uyghurs were not behind the bomb, despite the deaths of five Chinese nationals and the collateral opportunity a joint investigation would offer for bilateral intelligence-sharing at a time Beijing seeks stronger strategic ties with Bangkok. That indicated to some that senior Thai officials privately told their Chinese counterparts that the bomb was a domestic affair that would be handled internally. Others note that both the Abhisit Vejjajiva and Yingluck Shinawatra governments deported smaller groups of Uyghurs without threat or retribution. [Source]

Several other suspects have been detained in Thailand and in Malaysia, according to the AP.