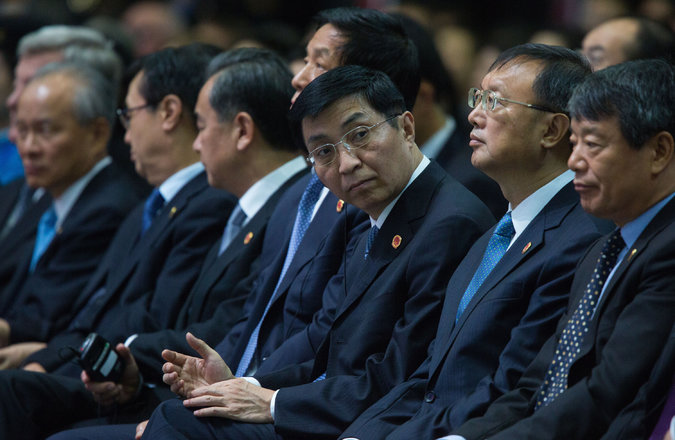 At the New York Times, Edward Wong introduces the top aides that made up Xi Jinping’s entourage during his recent state trip to the U.S., explaining their diplomatic inaccessibility in the context of the Xi’s noted wariness of “Western values” and efforts to consolidate his own power within the Party:

[…] Western officials say that this icy remove is true not only of [policy adviser] Mr. Wang [Huning], but also of other advisers with whom Mr. Xi travels, including Li Zhanshu, essentially Mr. Xi’s chief of staff, and Liu He, his top economic adviser.

[…] In past decades, foreign officials could speak with senior Chinese officials or aides and trust that those people were proxies for their leaders. […]

With Mr. Xi, those channels do not exist.

[…] The refusal of Mr. Xi’s inner circle to develop ties with Western officials is consistent with a fundamental belief that has become widespread in the system here — namely that Western ideas and influences will undermine the Communist Party and lead to a “color revolution.”

[…] There is also broad agreement that Mr. Xi keeps colleagues and advisers — especially technocrats in state ministries — at more of a distance than other Chinese leaders did and that he relies mainly on his own knowledge and instincts in making decisions. […] [Source]

Among the many scholars and experts quoted by Wong on the unprecedented isolation of Xi’s inner-Party from foreign diplomats and CCP subordinates, “Wealth and Power” co-author John Delury suggests that Xi’s approach could have been inspired by his experience as a youth during the Cultural Revolution. For a closer look at how the persecution Xi faced during Mao’s campaign shaped the princeling, see a separate report from the New York Times’ Chris Buckley.

At The Wall Street Journal, Jeremy Page profiles Li Zhanshu, a longtime personal friend of Xi now serving as head of the CCP General Office (his predecessor Ling Jihua was arrested and expelled from the Party in July amid Xi’s anti-corruption drive), explaining how his newly empowered role is representative of Xi’s broad concentration of power:

The enhanced powers of Mr. Li reflect Mr. Xi’s transformation of what was a collective, consensus-driven leadership into a more centralized presidential system dominated by himself and a small circle of loyal aides and advisers. The shift, analysts say, increases the risk that foreign governments will misunderstand or be surprised by Beijing’s actions.

Mr. Li is the linchpin of the president’s inner circle, with a role that increasingly resembles that of a White House chief of staff.

“The General Office used to balance the interests of all different factions. Now it places more emphasis on the leader himself, representing his will. When Li went to Moscow, it was like he was Xi’s private envoy. There’s no precedent for that.”

[…] Mr. Li now acts as gatekeeper and enforcer for the president, ensuring loyalty and compliance throughout the party apparatus, according to people familiar with the party’s inner workings. […] [Source]

Ding Xuexiang, 53, has emerged as the latest notable entrant into Mr. Xi’s inner circle, which has a reputation for being secretive and purposefully distant toward Westerners.

Mr. Ding serves as a secretary to Mr. Xi, after a career as a Communist Party cadre in Shanghai, where Mr. Xi spent eight months as party chief in 2007 after a political purge there. Mr. Ding moved to Beijing in 2013 after being appointed deputy director of the General Office of the party’s Central Committee. The director of the General Office is Li Zhanshu, an old friend of Mr. Xi’s from Hebei Province who essentially serves as Mr. Xi’s chief­ of­ staff. The General Office has the task of coordinating administrative affairs for senior party officials.

“Ding Xuexiang is more of the gatekeeper guy,” said Christopher K. Johnson, a former China analyst for the C.I.A. who is now at the Center for Strategic and International Studies in Washington. “He’s smart. There’s no doubt Xi listens to his thinking. He will likely become the General Office director once Li Zhanshu goes.”

[…] Under Mr. Xi, the General Office has been expanding its duties and moving into the realm of policy. Mr. Xi placed the executive office of the secretive National Security Commission, which he created to defend the party against domestic and foreign threats, inside the General Office. […] [Source]