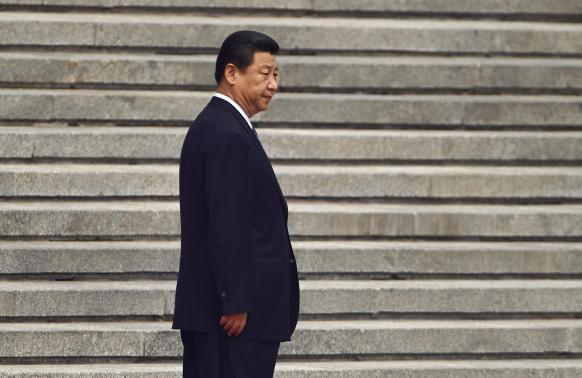 Jiao Yulu (1922-1964) was a local party official who became the posthumous star of a propaganda campaign extolling the virtues of honesty and dedication among cadres. After describing Xi Jinping’s effort to “resurrect an old party icon,” by honoring Jiao during a visit to Henan Province last month, author Murong Xuecun becomes another commentator to draw attention to the politics behind Xi’s ongoing anti-corruption drive. The essay has been translated and published at the New York Times:

But instead, his government has been locking up advocates of greater transparency.

[…] It’s true that since Mr. Xi took power in late 2012, several high-level officials have been arrested for corruption. But when I see a government that implores officials to emulate the supposed selfless clean living of Jiao Yulu while imprisoning people who urge leaders to reveal their assets, I have to ask: Does the government really intend to weed out corrupt officials or is it just putting on a show? This anticorruption campaign appears to be nothing more than a political purge by another name. […] [Source]

As Xi’s anti-corruption campaign has gained momentum in implicating party cadres, government and military officials, a report from Reuters cites sources claiming that Xi will be filling positions formerly held by purged officials with his own allies in effort to push his reform agenda:

[…] Xi hopes that removing corrupt officials and those resisting change will allow him to consolidate his grip on power and implement difficult economic, judicial and military reforms that he believes are vital to perpetuate one-party rule, said the sources, who have ties to the leadership.

In the most far-reaching example of his intentions, Xi plans to promote about 200 progressive officials from the eastern coastal province of Zhejiang, where he served as party boss from 2002 to 2007, to senior positions across the spectrum in the years ahead, two of them said.

“The anti-corruption (drive) is a means to an end. The goal is to promote his own men and like-minded officials to key positions to push through reforms,” said one source.

[…] Another source who met Xi in private this year quoted him as saying implementing reforms had been “very difficult” due to opposition from state-owned enterprises along with influential party elders and their children, known as “princelings”.

[…] While Xi appears set on driving reform on many fronts, human rights activists have said major political change was not on his agenda. For example, authorities have increased controls over the local media and prominent bloggers in the past year. […][Source]

Click through for Reuters’ in depth report on the anti-graft crusade and Xi Jinping’s efforts to consolidate power. While cracking down on bloggers and the media, the administration has also been heavily prosecuting anti-corruption activists who called for officials to disclose their assets—a seeming contradiction to Xi’s high-profile anti-corruption campaign.