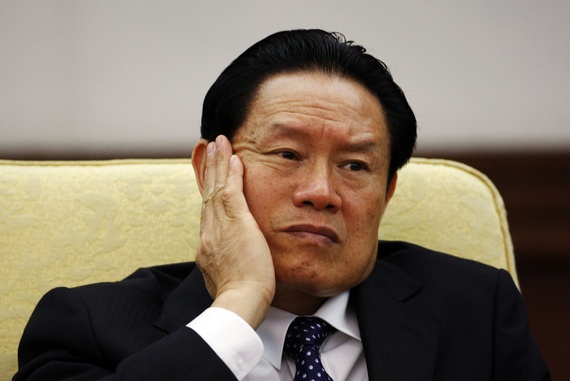 As Xi Jinping’s ongoing campaign against party corruption continues, yet another associate of retired security chief Zhou Yongkang has now been expelled from the CCP. Reuters reports:

Guo Yongxiang has been expelled from the ruling Communist Party and stripped of his public office for “serious law and discipline violations”, the party’s anti-graft watchdog said in an announcement on its website (www.ccdi.gov.cn).

Guo worked together with Zhou for at least 12 years, according to both their official resumes, including in the southwestern province of Sichuan where Zhou was party boss. Guo eventually rose to be a vice provincial governor.

The investigation found that Guo had “exacted profits for others with his power, taken a great amount of bribes and gifts himself or through the hands of his son”, the graft watchdog said in a brief statement. [Source]

More than 300 family members and associates of Zhou Yongkang, “arguably the most powerful man in China” at the time of his 2012 resignation from the Politburo Standing Committee, have been questioned, arrested, or detained in the ongoing corruption probe, and at least 90 billion yuan ($14.5 billion) in assets have been seized. While many ranking party officials who served under Zhou have recently been subject to investigation or dismissal, Zhou has not yet been formally charged. He has reportedly been under “virtual house arrest” since December.

Expulsion from the party is a step the party takes that moves the case into the government’s criminal justice system. Bo Xilai, the former top official in Chongqing, was removed from the party in late 2012 amid a murder and corruption investigation and  was sentenced to life in prison a year later.

Putting Mr. Guo on trial is important for the leadership in Beijing because it may gather evidence that can be used should they decide to publicly prosecute Mr. Zhou, said Ding Xueliang, a professor at the Hong Kong University of Science and Technology who focuses on Chinese politics and has met Mr. Guo in Sichuan.

“If eventually the top leadership agrees to have a public trial of Zhou Yongkang, then they need some evidence to bring to the table,” Mr. Ding said in a telephone interview. [Source]

Commentators have noted that the anti-corruption drive has more to do with internal party politics than with corruption, and have also pointed out the risks that hunting for high-level officials brings to the party. In his estimation, the South China Morning Post’s Jake Van Der Kamp suggests that Xi may be “in over his head” in trying to overhaul a system that has become so permeated by corruption:

[…] Administrative measures can have no success against corruption that has become this pervasive. Only a fundamental restructuring of the entire economy can do anything about it.

It is thus all very well for a national president to say that he will stamp out corruption and stage a few demonstration trials of egregiously corrupt officials. But for him to try and change an entire system of corruption through police action is to invite a widespread groundswell of reaction that may result in sweeping himself away.

It is my belief that this is the circumstance in which Xi actually finds himself, and it is my worry that he may not recognise it. He comes across to me as a true believer who may not see the danger to himself, and the consequent danger to the stability of the country. […] [Source]

In a recent article for The Atlantic, James Fallows includes a “crude but effective” corruption classification scheme and a reading list that could help in considering…:

[…] An increasingly important question for Xi Jinping’s time in office, which bears on the even more urgent question of whether China can make progress against its environmental catastrophe, involves the levels and forms of Chinese corruption. Has it begun passing from tolerable to intolerable levels? If so, does Xi Jinping have the time, tools, or incentive to do anything about it? Will exposing high-level malfeasance—like the astonishing recent case of Zhou Yongkang, who appears to have taken more than $14 billion while he held powerful petroleum and internal-security roles—encourage the public? Or instead sour and shock them about how bad the problem really is? Is it even possible to run a government and command a party while simultaneously threatening the system that most current power-holders have relied on for power and wealth? […] [Source]

In the opinion of Ben Richardson, the former Bloomberg editor who resigned in the wake of the organization’s choice not to publish a story tying a wealthy businessman to the leadership, the introduction of transparency measures would do much to clean up corruption and polish China’s image on the world stage. As the Xi administration has been crusading against official corruption, it has simultaneously cracked down on anti-corruption activists for calling on officials to disclose their assets.