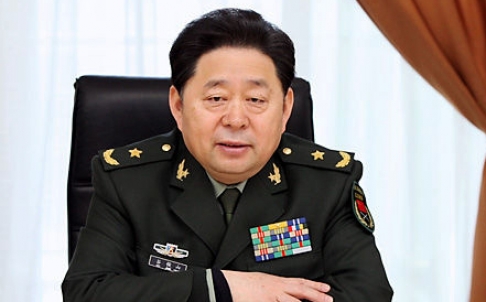 After an investigation that has lasted more than two years, prosecutors on Monday levied a range of criminal charges against former People’s Liberation Army official Gu Junshan, including bribery and embezzlement. From The South China Morning Post:

Lieutenant General Gu Junshan was charged with embezzlement, bribery, misuse of state funds and abuse of power by China’s military procuratorate, or prosecutor’s office. He is the highest-ranking officer to stand trial on such charges since Vice-Admiral Wang Shouye in 2006, who received a suspended death sentence for embezzlement.

The investigation against Gu, 57, has dragged on for two years since he was sacked and detained in early 2012. The delay fuelled concerns that powerful cliques within the army would hamper efforts to crack down on graft in the PLA.

But the case was finally brought before the military court yesterday, Xinhua reported, without giving further details. [Source]

Jonathan Ansfield of The New York Times writes that the charges could be the first of many moves taken by Chinese president Xi Jinping to clean up the armed forces:

The charges against the officer, Lt. Gen. Gu Junshan, are the outcome of a far-reaching inquiry under President Xi Jinping that signaled his determination to make high-profile examples out of dishonest military figures. His goal, military analysts said, is to transform a service larded with pet projects and patronage networks into a leaner fighting force more adept at projecting power abroad and buttressing party rule at home while tightening his own control over the army.

The announcement of the case against General Gu, made by Xinhua, the official news agency, provided no details. But an internal inquiry has accused him of presiding over a vast land development racket that hoarded kickbacks, bought promotions and enabled him and his family to amass dozens of expensive residences, including places where investigators found stockpiles of high-end liquor, gold bullion and cash, according to people briefed on the investigation.

The investigation into General Gu, who had a commanding authority over how resources in the army were used, has shaken the military because of the scale of his activities — estimates of his assets range from several hundred million to a few billion dollars — and because it threatens some of its most senior figures. [Source]