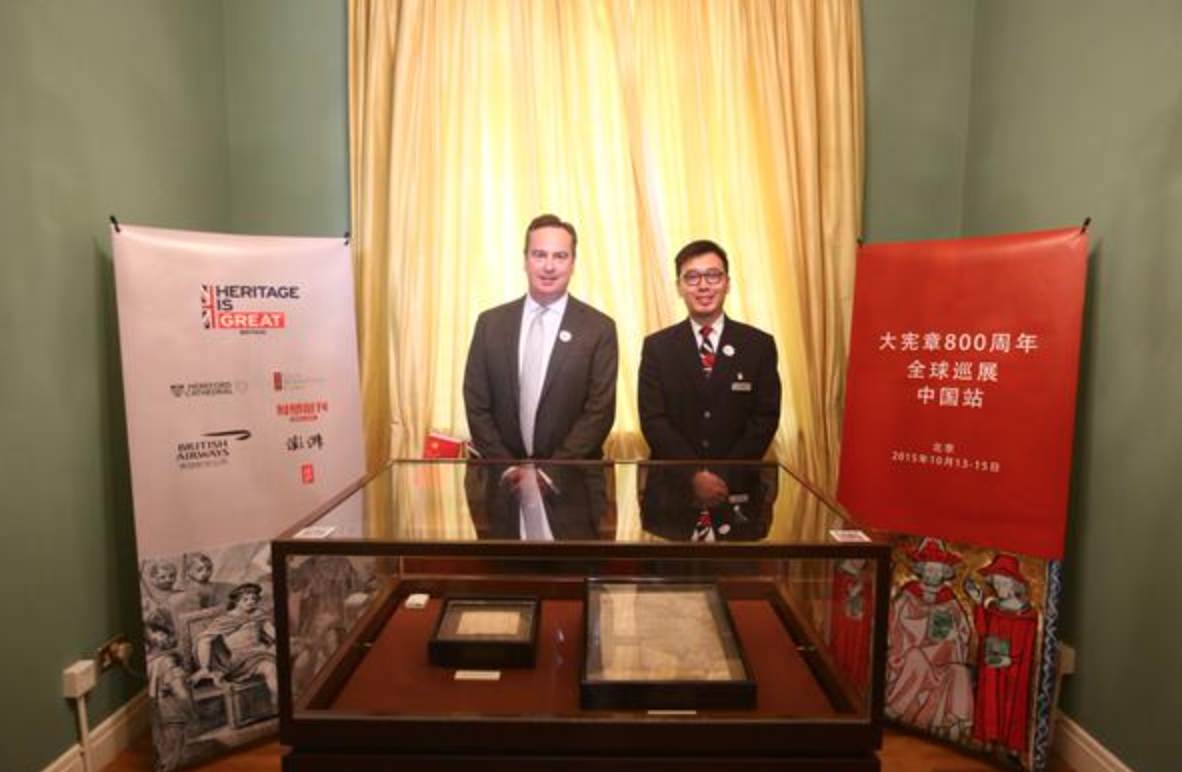 Ahead of a state visit to the U.K. by Chinese President Xi Jinping, The Guardian’s Tom Phillips reports calls by activists for him to examine a copy of the Magna Carta on display in Beijing:

A 1217 version held by Hereford Cathedral, one of only 17 surviving 13th century texts of the “Great Charter”, was put on show at the British ambassador’s residence on Tuesday. It will head to Shanghai and Guangzhou later in the week.

[…] “I very much hope that Xi can go and see [the exhibition],” said Yu Wensheng, an outspoken attorney who was among those targeted during a continuing roundup of civil rights lawyers.

[…] Many Chinese were interested in Magna Carta because it symbolised the moment at which “the king became subject to the rule of law and the king’s power was, if you like, constrained by the nature of the rule of law”, [Sir Martin Davidson, chairman of the Great Britain China Centre] said.

But he denied bringing the document to China was an attempt to preach to Beijing. “I don’t think there is any point in saying: ‘We’ve got a system, just copy it.’ That’s not going to happen.” [Source]

This approach appears to be the last thing the British government has in mind. A recent tour of China saw Chancellor George Osborne adopt a controversially supplicant posture, and London’s eagerness to place trade ahead of human rights concerns has prompted accusations that British policy is now “for sale to China.” China’s state media, on the other hand, praised Osborne’s pragmatism, while Foreign Minister Wang Yi judged that “the two countries have overcome difficulties and obstacles”—particularly Prime Minister Cameron’s 2012 meeting with the Dalai Lama—”to maintain sound development toward mature and stable relations.” China’s ambassador to the U.K. Liu Xiaoming echoed and expanded on this assessment in the Diplomat:

In October, at the invitation of Her Majesty The Queen, President Xi Jinping will pay a state visit to the UK. This will be the first state visit by a Chinese President in ten years. The historic significance of this visit cannot be overstated. It is expected to mark a new milestone for the China-UK relationship.

The ‘Golden Time’ is dawning but it has not come overnight. It is, rather, a result of tireless work in building political trust, economic cooperation, cultural partnership and coordination on global issues.

[…] A more mature and stable China-UK relationship will make it possible for bilateral cooperation to expand in scope and depth, and for mutual interests and win-win cooperation to grow. This will bring tangible benefits to the people of both countries and will contribute to world peace and development. As the long-expected State Visit by President Xi Jinping is approaching, we are ready to work with British colleagues to ensure the success of the visit and embrace the ‘Golden Time’ of China-UK relations. [Source]

Osborne’s own rhetoric about “a golden relationship with China that will help foster a golden decade for this country” has been strikingly similar. At The Financial Times, James Kynge and George Parker charted the two parties’ recent “linguistic ping pong” of “ever more florid descriptions of mutual affection”:

China started the bidding by calling 2015 a “big year” for ties. UK officials then offered “a golden year”, but by the time David Cameron, the UK prime minister, spoke recently on the phone to his counterpart, Li Keqiang, he had elevated this to “a golden time”, the officials said.

Chinese officials then went into a huddle. They felt that “a golden time” sounded like it might be a description of things past and so suggested “a golden era”. But when Oliver Letwin, a UK member of parliament, gave a speech in late September to honour Chinese national day, he used the phrase “golden decade”. [Source]

The Magna Carta has recently been cited in response to claims by China’s top representative in Hong Kong that the territory’s chief executive ranks above its judiciary and legislature. In April, The New Yorker’s Jill Lepore examined “the myth of Magna Carta as a single, stable, unchanged document,” and wrote that its “significance has often been overstated, its meaning distorted.”