Bandurski on the Villages Within China’s Cities 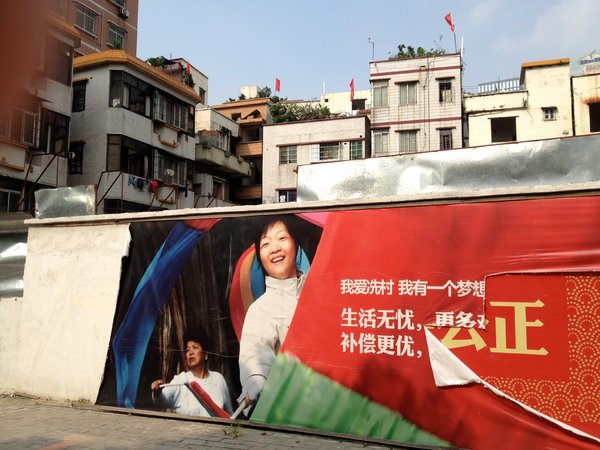 At The New York Times, Patrick Boehler speaks with China Media Project’s David Bandurski about the Chinese phenomenon of urban villages–clusters of rural communities enclosed by urban construction–that are the focus of Bandurski’s new book, Dragons in Diamond Village.

Q. What are urban villages?

A. Basically, they are bizarre pockets of rural China right inside the city. These villages were overtaken by cities as they expanded in the 1980s and 1990s, swallowing up their farmland. Once this happened, the villagers built tenements on top of their old village housing plots, their own homes. They rented these apartments to migrant workers coming into the city, who couldn’t afford to live in residential blocks. Eventually, urban villages that might have been home to 2,000 or 3,000 villagers became home to migrant populations of 40,000 or even 70,000 people.

You can be in the center of Guangzhou, walk down an alley and find yourself inside a cramped village space where the streets have the same pattern they might have had a century ago. The buildings are often so close that they nearly touch, and sometimes even shut out the sunlight. In Guangzhou, in the main urban development area, there are 138 urban villages. But they can be found in just about every city in China, so there are thousands and thousands of them. They are the secret ingredient not just of urbanization in China, but also of the country’s overall economic growth. Without the cheap housing they provide, populations of cheap migrant labor couldn’t be sustained in major manufacturing centers. [Source]

In an interview with Vivienne Zeng at Hong Kong Free Press, Bandurski discusses the politics of land financing and urban development behind the urban village phenomenon:

Bandurski: […] Land is still so fundamental to both local and national economics and politics. The cities need rural land, not just for urban development, but to generate growth and revenue. Many cities rely heavily, if not chiefly, on land financing — which means usually that they take land cheaply from villagers, which creates the kind of pain you see in my book, and then sell it on to property developers. The government stands right in the middle of this lucrative process, and it’s unfortunately a recipe for unfairness and corruption.

One of the biggest tragedies is that the focus in planning has not really been on the new urban population. You hear all the time about how many tens of millions of rural Chinese will be entering the cities, or already have. And we assume that this generates demand for residential property, which should be the case. But there is a serious disconnect. The new properties being built are not for these populations. They are mostly for property investment and speculation. The “rural” migrants entering China’s cities still need to land in “rural” spaces there — which is why urban villages play such an important role. [Source]

In his book, Bandurski documents the formation of a rights defense movement among villagers in response to land grabs and forced demolitions by local officials. From his talk with Noreen Mir on RTHK Radio 3:

Bandurski: […] The city wanted to get rid of a lot of these villages, especially in Guangzhou and Shenzhen. So they started these so-called regeneration campaigns. Later on, about 2009, I started focusing on the efforts of these villagers to push for their land use rights and to push against the demolition of their properties. So this is really the focus of the book. I am looking not at the migrant workers so much as the local villagers. They have really deep histories and this is where the title also comes from—the dragons are about the duanwu dragon boat festivals.

Mir: I read that [the villagers] are secretly celebrating the dragon boat festival. Why secretly?

Bandurski: Well in the case of the Xian Village, which is nicknamed Diamond Village because its land is so valuable, it is right in the middle of the central business district in Guangzhou. It is half in ruins but it’s still there. Basically they were prevented from doing the dragon boat races for about ten years because this was a way for the community to get together. And if they got together they would start talking about corruption and the village leadership. So the village leadership did not want them to celebrate this festival. So this became the center of their rights defense movement—they gathered around the idea of the dragon boat festival. [Source]

Read more about urban planning in China, via CDT.