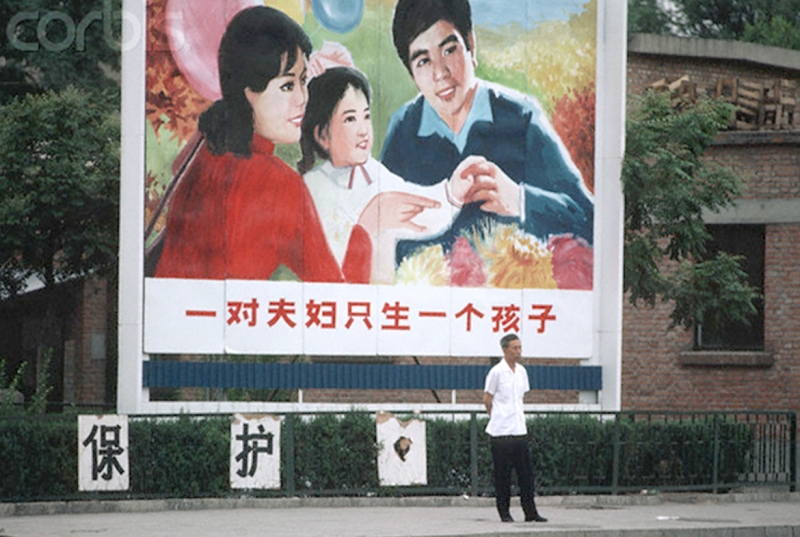 Now that the Chinese government has adjusted the national family planning regulations to allow families to have two children, demographers, sociologists, economists, anthropologists, and others are busy interpreting the long-term impact of the past 35 years of the one-child policy. In the New York Times, Brook Larmer looks into some of the social implications of the policy:

The debate over whether the one-child policy has been essential to China’s rise, or whether that would have been achieved naturally without such an intrusive campaign, will rage for years to come. But even the government has come to recognize, belatedly, its dangerous social and economic consequences.

Chinese officials still seem impervious to the needless human suffering the policy has inflicted: the forced abortions and sterilizations, the undocumented children born and raised in the shadows, the persecution and even imprisonment of those (like the blind lawyer Chen Guancheng) who tried to expose its abuses. But Beijing’s reversal is an attempt to mitigate the massive social imbalances that will most likely reverberate for generations: the shrinking work force that is hurting China’s competitiveness; a rapidly aging population with too few young people to shoulder the burden; and a sex ratio so skewed that there is now a bubble of 25 million extra males of marrying age, “bare branches” on the family tree with few prospects of ever finding a wife.

[…] The emergence of “bachelor villages” like Yihe was not unforeseen. A cultural preference for boys as family heirs meant that many parents tried to avoid having a daughter through selective abortion, adoption, even infanticide. One architect of the original one-child policy, Tian Xueyuan, told Reuters he warned top officials years ago that “a substantial portion of China’s men will not be able to find a match … and that will be a major factor of social instability.” [Source]

In the New Yorker, Barbara Demick interviews Mei Fong, author of One Child: The Story of China’s Most Radical Experiment

, where she also talks about the less extreme but more insidious impacts of the policy:

How has the one-child policy shaped the character of today’s China?

When I first moved to China, I thought of the one-child policy mainly through its excesses—the forced abortions and female infanticide—but it actually has a strong effect on the everyday lives of ordinary Chinese. All these questions, like who you marry, what kind of job you have, how do you grow old comfortably, the answers are all shaped to some degree by the one-child policy.

If we imagine such as thing as an “average” person in China, that person would likely be male, since men outnumber women. (Today, some provinces in China have between twenty-six and thirty-eight per cent more males than females.) He’d likely be an only child, especially if he was born in a city. If he’s a young bachelor living in a smaller city—not Beijing and Shanghai, which are outliers—he and his parents would probably be enormously anxious about his marriage prospects, and they might have hocked everything to buy an apartment beyond their means, to increase his eligibility. His parents would be particularly worried not just because he’s their one-and-only, and therefore every decision he makes he makes is imbued with earth-shaking significance, but because the one-child policy has reduced the supply of potential daughters-in-law, who are the traditional caregivers of elderly people in China. If their precious only son suffers an untimely death, they’ll become shidu—the name for parents whose only child has died. There are about a million shidu parents in China, with seventy-six thousand joining their ranks yearly, and they’re really to be pitied, because they not only lose financial security with the death of a child they also have difficulty getting accepted into nursing homes, or buying a burial plot, and they fall far down the societal totem pole. [Source]

Fong elaborates on this idea in an op-ed in The Guardian, in which she discusses the impact of the one-child policy on China’s real estate market:

A huge gender imbalance and the creation of a generation of only children – the “Little Emperors” – have vastly increased marriage anxieties. Parents with only children are hugely invested in their offspring’s life choices, especially whom they marry. And since the policy, coupled with an age-old preference for sons, has created a Canadian-sized population of surplus men – some 30 million – there are fewer brides to go around, intensifying the marriage squeeze.

More than ever since the 1949 founding of the People’s Republic, marriage has become a matter of money, valuation and investment.

The bachelor surplus has buoyed the country’s real estate market, as families with sons snap up apartments to make their offspring more desirable on the marriage market. Some economists estimate that this sex-ratio imbalance accounted for a 30-48% increase in housing prices in China between 2003 and 2009.

The phenomenon has popularised the Chinese saying, “building a nest to catch a phoenix”, and the ones best feathering their nests are estate agents. China’s soaring property prices have created a colony of mortgage slaves – fangnu – hapless people on the hook for astronomical sums similar to America’s sub-prime lending victims. [Source]

The individuals whose lives have been most deeply impacted are of course those who were born out of policy, and so without official registration, or hukou, and therefore no access to basic social services including healthcare and education. Chris Buckley interviews one such woman for the New York Times:

The rules say that officials cannot deny such children their official resident permits and other papers, but in practice officials deny them as a way of punishing families, or families avoid applying for the permits out of fear of being fined. In previous decades especially, local governments have been under intense pressure to meet population control targets, encouraging administrators to resort to forced abortions, home demolitions and other coercive measures to punish wayward families.

[…] Ms. Li grew up in the shadow of her sister, Li Bin, eight years older, who was born with official approval and had all the right papers.

The elder sister went to school; Ms. Li could not. She said she learned from her sister and from reading books on her own. Her elder sister could visit a doctor when she was ill; Ms. Li said she could not, because clinics and hospitals in Beijing usually require identification papers. And while her elder sister found work in a factory, Ms. Li struggled, because most employers demand identity papers.

[…] “Without a residence permit, she doesn’t have any rights,” said her sister, Li Bin. “It’s already created so much harm. How will she work in the future, how will she get married? There are many problems that we can’t keep her from for the rest of her life.” [Source]

The bigger question raised above by Brook Larmer—”whether the one-child policy has been essential to China’s rise, or whether that would have been achieved naturally without such an intrusive campaign”—is a frequent topic of Harvard economist and Nobel laureate Amartya Sen, who has long argued that women’s empowerment in society is the most secure way to reduce the birth rate. After the announcement that China was reforming the one-child policy, Sen wrote in the New York Times:

This is a good moment to examine what the one-child policy has done — or not done. First, we must question the glib history that China was stuck in the adversity of high fertility rates until the policy changed it all.

The one-child policy was introduced in 1978. But the fertility rate had already been falling rapidly for a decade before that — from an average of 5.87 births per woman in 1968 to 2.98 in 1978. After that huge drop, the fertility rate continued to fall with the new draconian policy in force, but there was no plunge — only a smooth continuation of the falling trend that preceded the restriction. From 2.98 in 1978, the rate has declined to 1.67 now.

Clearly, something more than the one-child policy has been affecting birthrates in China. Statistics that compare different countries, as well as empirical analysis of data from hundreds of districts within India, indicate sharply that the two most potent factors that induce fertility reduction globally are women’s schooling and women’s paid employment.

There is no mystery in this. The lives that are most battered by over-frequent bearing and rearing of children are those of young mothers, and more schooling and more gainful employment both give young women a greater voice in family decisions — a voice that tends to work in the direction of cutting down the frequency of births. Rapid expansion in China of education, including that of girls, and the enhancement of job opportunities for young women occurred through a series of decades that began well before the introduction of the one-child policy, and they have continued robustly since. [Source]

Indeed, as Gloria Chan reports for the South China Morning Post, some Chinese feminists are not thrilled by the idea of expanding the number of children women have without accompanying policies to enforce equality in the workplace and with regards to childcare:

The microblogger on the Weibo website living in the city of Wuxi, in Jiangsu province – identified only as yangxue800226 – posted a comment on Sunday saying that the Chinese government had not provided a good environment for women to give birth.

She also said further policy changes were needed before permitting Chinese couples to have two children.

Yangxue800226 suggested introducing changes such as requiring husbands to take paternity leave and having the country pay 50 per cent of the salary and benefits that women were entitled to have while on maternity leave.