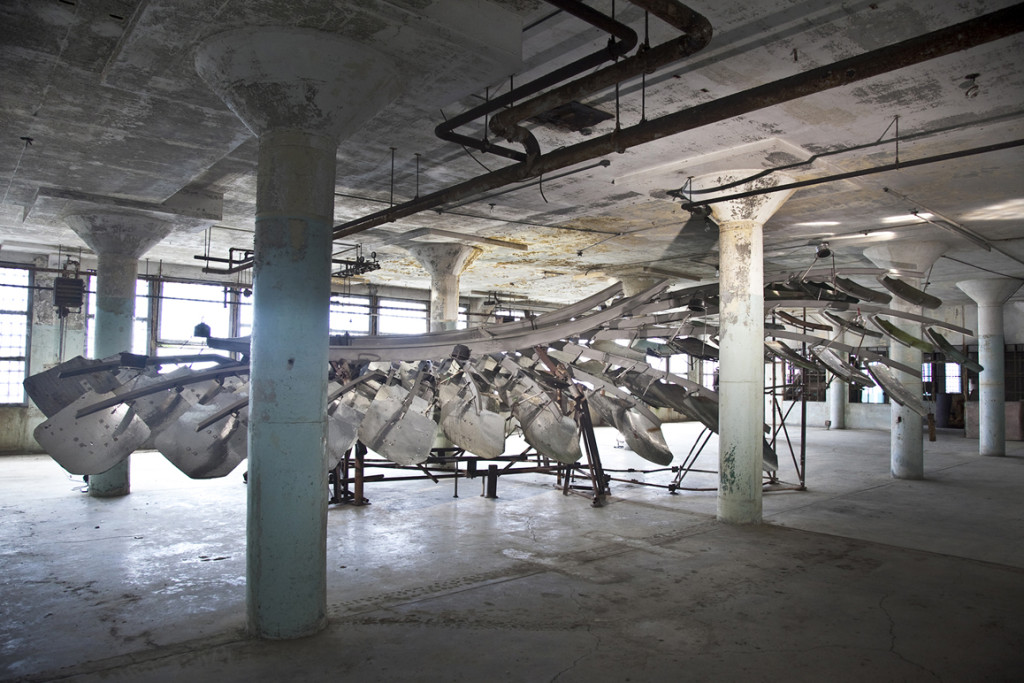 As Ai Weiwei asks supporters to drop donated Lego through the sunroofs of strategically parked BMWs, Tibetan author Woeser recounts her role in sourcing materials for an earlier project which was displayed at last year’s @Large exhibition on Alcatraz. From Zhao Wencui and Chas McKhann’s translation, posted at High Peaks Pure Earth:

I am a native of Lhasa. Even though I have been living in Beijing for ten years, I always go back and spend a few months in Lhasa every year. The three months that I spent there in 2013 were especially meaningful because I discovered “feathers” for Ai Weiwei’s “Wing” while I was taking photos of ruins in the Old Town and having Tibetan costumes made for him at three (Tibetan-owned) tailor shops. Those “feathers” and those Tibetan costumes filled my busy days with meaning but must have baffled the plainclothes cops who always followed me around.

The Tibetan Plateau sticks high into the sky and enjoys abundant sunshine, Lhasa is known as “the City of Sunlight”. Many households there have installed solar stoves (called “nyima top” in Tibetan) in their courtyards or on the roofs of their houses to heat water and cook food. The heat needed to heat water or cook food is emitted by mirror-like reflective metal panels. They take two forms: the old-style which is round in shape, like the sun, and comparatively bulky and heavy, and the new-style which looks like two wings, foldable and easily disassembled. Ai Weiwei’s “Wing” makes use of the latter.

[…] First, I thought he just wanted one “wing”. I went to a small shop on a street in the Old Town to make inquiries, and was told that a new one cost about 400 Yuan. But it was too new, and new “wings” lack something. After thinking a bit, I asked Ai Weiwei: “How about a used one? One that has been shined by the sun of Lhasa, boiled the water of Lhasa, and mirrored the silhouette of Tibetans? I can buy a new one and exchange it for a used one with a local Tibetan. How does that sound?” [Source]

On her own blog, High Peaks editor Dechen Pemba discusses the importance of translation, and her aspiration for the site to become fully trilingual (in Tibetan, English, and Chinese):

Due to the political situation in Tibet today and long-standing policies of the Chinese government on language, it is necessary to monitor Tibetan blogs, social media and cultural expressions in both Chinese as well as Tibetan languages. It became clear to me in 2008 that whatever information was being made available online by people on the ground, despite being freely accessible (at least for a while), was not getting out due to one simple reason, the language barrier. For example, had it not been for the efforts of China Digital Times, key information being blogged by Tsering Woeser would not have had the impact that it did. Woeser’s documentation of the Tibetan uprising in real time was translated from Chinese into English and made available on almost a daily basis. This proved invaluable throughout 2008, and, Woeser’s blog is now regularly translated into English on the translations website I subsequently co-founded in September 2008.

[…] There are other Tibetan-run translations projects online that are doing great work. For example, the team at Karkhung.com translate all kinds of articles from English into Tibetan, not just Tibet-related articles but also works of investigative journalism and literary fiction. These acts of translation go far beyond mere words on the screen: translations into our own language contribute towards modernising and enlarging our own culture and play a large part in raising the self-esteem of a nation. We Tibetans can feel proud that our language is not only being translated into other languages but that our language is also more than able to handle and convey complex meanings and ideas from outside. Using our language is akin to asserting our right to exist. [Source]