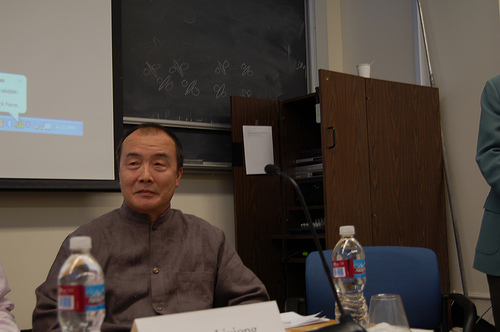 Radio Free Asia reports that writer, historian, and frequent critic of China’s ethnic policies Wang Lixiong has been barred from traveling to Japan due to concerns that his visit would “damage national security.” Wang was heading to Japan to promote the recent release of a Japanese edition of his 1991 political science fiction novel “Yellow Peril,” which is banned in China. The Japan Times reported on the travel ban against Wang on December 18. RFA’s Qiao Long reports, with English-translation by Luisetta Mudie:

Wang confirmed he had planned to travel to Tokyo last Saturday, but had been told he couldn’t leave the country because he might “endanger national security.”

“They always say that,” he said. “It’s a catch-all expression.”

But he declined to comment further, saying that he had “made a promise” not to speak to the press.

[…] Wang, who closely follows Uyghur and Tibetan issues, has been openly critical of Beijing’s policies in those regions.

[…] In January 1999, Wang was formally arrested on suspicion of “leaking state secrets” and held for 42 days before being released after he carried out research for an article on Beijing’s policies in Xinjiang.

He was also held under house arrest in July 2014 along with his wife Tsering Woeser during a visit to Beijing by U.S. Secretary of State John Kerry.

Woeser is already unable to travel, having had a passport application turned down by the authorities. [Source]

Read more on Wang Lixiong, his wife Woeser, and ethnic tensions in Tibet and Xinjiang, via CDT.