WeChat Plays a Role in US Rallies for NYPD Officer 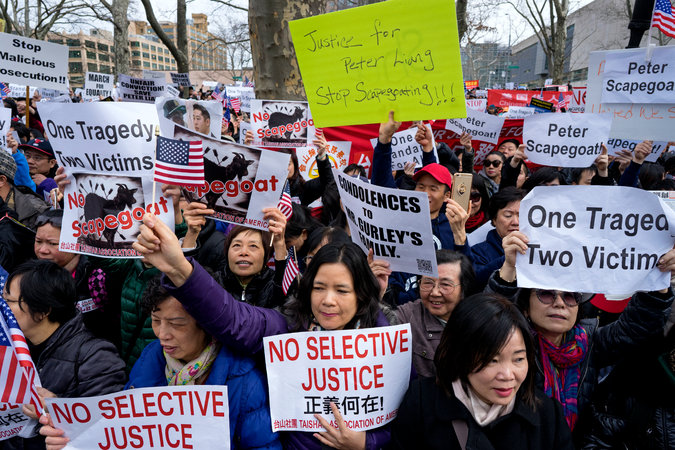 Over the weekend, Chinese-Americans across the US gathered to protest the conviction of Peter Liang, a former NYPD officer who was found guilty of manslaughter for the fatal shooting of an unarmed black man in 2014. Julie Makinen at the Los Angeles Times looks at the vital role that the Chinese messaging app WeChat played in mobilizing the Chinese-American community, who believe Liang has been scapegoated because he of his race.

Saturday’s rallies — in New York, Boston, Philadelphia, Los Angeles and dozens of other cities — were a rare instance of collective political action by Chinese Americans, many of whom contend Liang was sold out by the NYPD because of his race.

A crucial factor in the turnout was WeChat, a.k.a. Weixin, a social media platform developed by the Chinese company Tencent and used primarily on smartphones.

[…] “Most of the organizing was done on WeChat. There was some via email, Facebook and Twitter, but very little,” said Jack White, a small-business owner who immigrated from China 13 years ago and is president of the Minnesota Chinese Assn. It was the first time, he said, that he had taken part in such a protest.

[…] Not all the WeChat organizers, though, are in the United States; a number publicizing the rallies are in mainland China.

One, a software engineer named Xie Shuisheng with a doctorate from an American university, runs a WeChat account called Civil Rights. Through that and via a software service he developed called WeiDB.com that enables users to easily publish long opinion pieces on WeChat, Xie has been urging Chinese in the United States to “get involved in American democracy.” [Source]

At Global Times, Zhang Yiqian notes the apparent lack of Chinese students at the weekend’s rallies, citing the lack of familiarity with demonstrations and weak link with the Asian-American community as causes for their absence:

[Los Angeles-based WeChat organizer of 2013 anti-Jimmy Kimmel protests] Wang [Tian] admits in the past protests he’s organized that he’s only seen few Chinese students getting involved. Most of the participants were people who have been in the US for more than five years, who understand how things work.

He believes because many students have just come to the US and experienced little or no discrimination, not like the abuse Chinese communities have suffered in the past, so they don’t understand why people march on the streets for a “small matter.”

[…] “Some might say, I have an F-1 visa, I’m a student, will it (attending a protest) affect me in the future?” he said. “But they don’t understand, it’s a common thing in the US and anybody can participate, as long as you don’t break the law.”

[…M]any Chinese students see themselves as guests in another country, and doesn’t think these racial issues matter to their personal rights.

In the comment section of an article on Liang’s case published prior to the demonstrations in the North America Student Daily, a social media news portal, some expressed disagreement. Some Chinese students showed that they do not link themselves closely to the Asian-American community. [Source]

At The New York Times Magazine, Jay Caspian Kang discusses how the Liang protests are intertwined with Asian-Americans’ anxieties about race, their long-standing political silence, and the lack of an associated racial discourse that speak to the distinct experiences of Asian-Americans.

Each of these thoughts represents an uneasy, probing investigation into the complicated, often-complicit relationship between Asian-Americans and the nation’s racial hierarchies. I do not claim to know the right answer to any of these questions. I do not know how to explain why I knew Liang would be found guilty well before the verdict was announced. I cannot adequately describe the conflict in feeling like a race traitor for applauding Liang’s conviction while also feeling like a race traitor for questioning it. I know the lifeblood of my conditional whiteness as an educated, upwardly mobile Asian-American lies somewhere in those conflicts. And because it’s historically been in the best interests of people like me to never discuss these things, even in private, I lack the vocabulary to discuss it.

[…] The dissonance between those two stories — the pan-cultural dream and the reality — is what deforms the stated intentions, however good or bad, of the Peter Liang protests. On Saturday, some protesters carried signs bearing the Rev. Martin Luther King’s Jr.’s image and a quote: “Injustice anywhere is a threat to justice everywhere.”

This is the stunted language of a people who do not yet know how to talk about injustice. The protesters who took to the streets on Saturday are trying, in their way, to create a new political language for Asian-Americans, but this language comes without any edifying history — no amount of nuance or qualification or appeal to Martin Luther King will change the fact that the first massive, nationwide Asian-American protest in years was held in defense of a police officer who shot and killed an innocent black man.

And yet it would be catastrophic to ignore the protesters’ concerns altogether. Asian-Americans have begun to protest in the streets, in part, because they have begun to wake up from that multicultural dream in which their concerns are lumped in with the rest of the minority groups of America. The word “minority” has increasingly come to encompass only black and Hispanic people. Perhaps it always did. It is my belief that Asian-Americans have to form their own way of talking about race, privilege and justice, one that acknowledges both our relative privilege and the costs of our invisibility. But that language takes time to build, and at the next political action, the message will certainly still be clumsy and riddled with contradiction. I only hope it serves a more just cause than the freedom of Peter Liang. [Source]