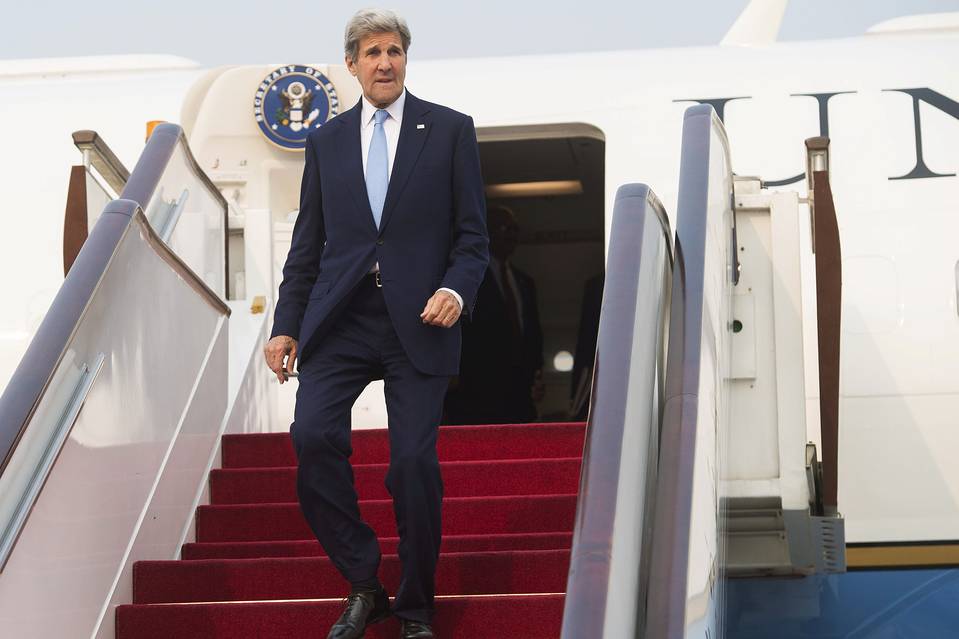 The eighth annual U.S.-China Strategic and Economic Dialogue (S&ED) commenced on Monday in Beijing. The two-day meeting of high-level U.S. and Chinese bureaucrats is expected to cover a wide range of topics, including foreign policy issues and China’s excess industrial capacity. At The Wall Street Journal, Lingling Wei and Felicia Schwartz report that the prospect for resolving disagreements and making progress at this year’s S&ED is limited as the Obama administration prepares to take its leave.

Disagreements in the mainly closed-door talks among dozens of senior officials this week were on display Monday. U.S. Treasury Secretary Jacob Lew took Beijing to task for its regulatory barriers on foreign businesses and urged it to cut the rampant excess capacity in steel and other industries that is having “a distorting and damaging effect on global markets.”

[…] China and the U.S. are dealing with an array of disputes, from duties on trade, Chinese currency policy and investment hurdles to cybersecurity and China’s new security laws and regulations that restrict foreign nonprofit groups and pressure businesses to transfer technology.

[…] This year’s strategic and economic dialogue, or S&ED as the talks are known, is the last for the Obama administration, leaving little time for major initiatives. With China policy—especially on trade—already a topic in the presidential election, Chinese analysts expect the next president is likely to start out with a harder line toward Beijing.

“At this final S&ED it is unlikely that there will be substantial outcomes because deals have already been reached in areas where they agree,” said Bonnie Glaser, senior adviser for Asia at the Center for Strategic and International Studies in Washington. “The most difficult areas are left and will likely be inherited by the next U.S. administration.” [Source]

On Twitter, AFP’s Tom Hancock highlighted a passage by U.S. China scholar David Shambaugh on the talks’ limitations as a mechanism for “forging real cooperation and coordination,” even without the complication of a looming election:

David Shambaugh has a pretty good take on the annual China-US 'dialogue'. pic.twitter.com/NRJxGuvJ8y

Of the many issues the two sides will discuss, one of the most contentious is Beijing’s assertive territorial claims in the South China Sea, with the U.S raising new concerns over Beijing’s intent to establish an air defense identification zone in the disputed region. The Wall Street Journal’s Felicia Schwartz reports in a separate article:

Disputed claims in the South China Sea are likely to overshadow security discussions as Beijing pursues a series of major reclamation projects on disputed islands and reefs, part of an area variously claimed by Brunei, Malaysia, the Philippines, Taiwan and Vietnam. The Pentagon views China’s reclamation of more than 3,200 acres of land over the past two years in parts of the disputed South China Sea as coercive and intended to advance its interests while stopping just short of provoking war.

U.S. officials now are concerned that China will establish an air defense identification zone over the South China Sea, restricting flights by other countries. On Sunday, while in Mongolia before heading to China, Mr. Kerry said such a move would be “provocative and destabilizing” and would “automatically raise tensions and call into serious question China’s commitment to diplomatically managing territorial disputes in the South China Sea.” [Source]

Nike Ching and Richard Green at VOA write that U.S. Secretary of State John Kerry has reiterated Washington’s neutrality on the claim disputes and urged China to find a peaceful diplomatic solution that does not involve provocative unilateral actions. On the Chinese side, President Xi Jinping has called on both parties to acknowledge existing differences and avoid confrontation.  Xinhua’s Fei Liena also urged Washington to look beyond regional disputes in the South China Sea and focused instead on the “big picture of bilateral cooperation.”

At South China Morning Post, Li Jing looks at how U.S. China cooperation on climate change could serve as a model for the two sides to come together in resolving their disagreements.

“Cooperation on climate change between the two countries is a highlight in the new type of major power relations, as well as an exemplar of a new global governance system,” [Xie Zhenhua] said.

The two countries decided to bury the hatchet and stop challenging and blaming each other during international climate talks after the failure of the 2009 Copenhagen climate summit to reach a global deal.

Since Xi took office three years ago he has repeatedly promoted the idea of a new type of “major power relations” to govern China-US ties based on cooperation and mutual respect, receiving only a lukewarm response from Washington. [Source]

Meanwhile, The Economist argues that widening differences and shrinking “areas of mutual benefit” are cause for skepticism about the S&ED’s prospects, with tensions in the South China Sea as part of a broader pattern of bilateral tension.

What alarms America is that Chinese behaviour in the South China Sea seems to fit a pattern. In a speech on May 27th Ash Carter, the defence secretary, made a point belaboured by American leaders: that “On the seas, in cyberspace, in the global economy and elsewhere, China has benefited from the principles and systems that others have worked to establish and uphold, including us.” What, Americans wonder, is China’s problem? No country has gained more from the current order. Yet now, said Mr Carter, “China sometimes plays by its own rules, undercutting those principles.” […]

[…] Indeed, as Mr Carter suggested, it is not just in its maritime adventurism that China is at odds with America. Old differences widen, as new ones crop up. It is hard for American leaders to ignore human-rights lobbyists, at a time when China is conducting one of its harshest crackdowns on dissent in recent years. Nor is American business brimming with enthusiasm for China. Rather, it grumbles about cyber-espionage, the theft of intellectual property, the stalling of negotiations on a bilateral investment treaty and a general perception that the trajectory of economic policy in China is no longer towards gradually increasing openness, but towards greater autarky and protectionism. […]

[…] It used to be argued that, despite manifold areas of tension between China and America, the relationship was so complex and multilayered there would always be mitigating areas of mutual benefit. One of the reasons why relations are so fraught now is that such bright spots are so few. [Source]

Elsewhere, Human Rights Watch has issued a joint letter with nine other organizations urging the U.S. government to push for progress on human rights issues at the S&ED.