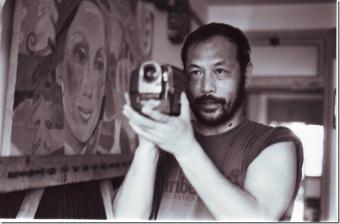 Born in 1958 in Jinan, Shandong, Hu Jie is an artist and filmmaker known for making documentaries on the policy excesses of the Mao era, none of which have been publicly screened in China due to their politically sensitive nature. He is best known for a trilogy of documentaries he made between 2004 and 2013, consisting of “Searching for Lin Zhao’s Soul” (《寻找林昭的灵魂》) (2004), “Though I am Gone” (《我虽死去》) (2006), and “Spark” (《星火》) (2013). The latter film, which focused on a group of students who were arrested after publicizing officials’ conduct during the Great Chinese Famine (1959-1961) won top prize at the 2014 Taiwan International Documentary Festival.

Prior to beginning his career as a filmmaker, Hu Jie received a degree in oil painting from the Art College of the People’s Liberation Army in Beijing, and after graduation served in the PLA for 15 years. After his service, Hu began to travel China with his camera, before briefly working as a video journalist for Xinhua News Agency. In a 2015 interview with The New York Review of Books’ Ian Johnson, Hu described his introduction to documentary filmmaking and his short stint with Xinhua: 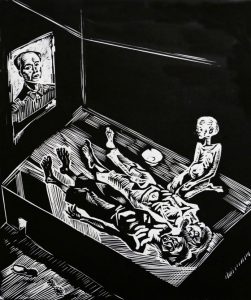 In addition to films, Hu also continues to make oil paintings and hand-carved woodblock prints, which sometimes topically supplement his films. In 2014, the year that “Spark” debuted, Hu created a series of woodblock prints depicting scenes from the Great Chinese Famine. The prints were to form an exhibition in Tianjin that was cancelled. The blockprints did go on public display in China in 2015, during a weeklong exhibition in Guangzhou.