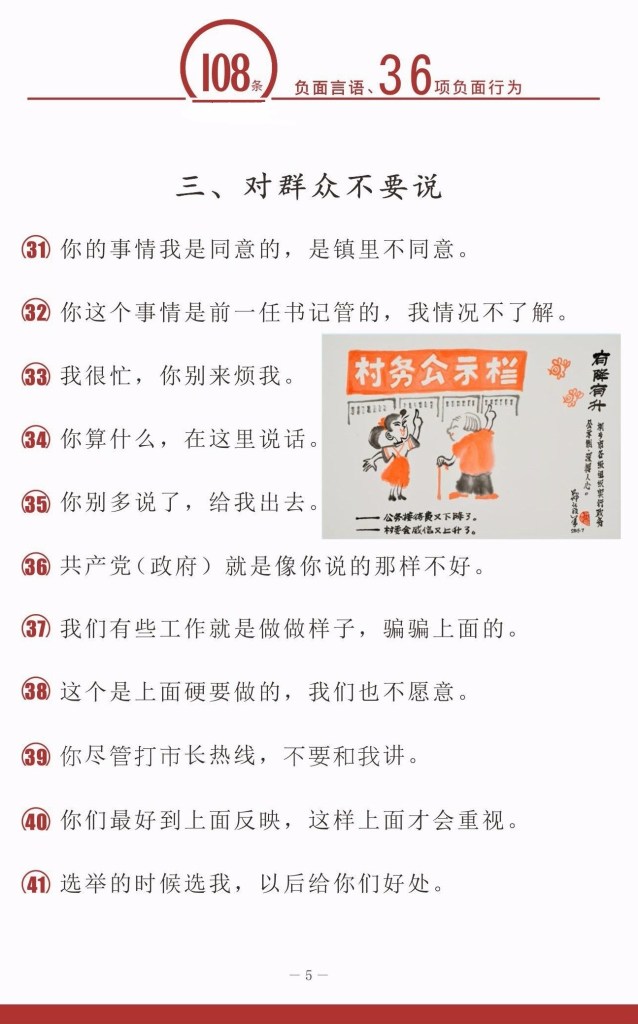 A Party handbook released in Ningbo lists 68 “improper words and actions” that Party officials should avoid uttering or doing. A report from state-run new media outlet The Paper describes some of the content in the book, and a journalist’s reflection on it:

For example, on page one, one person crosses one leg over the other, sits on a stool, and uses empty words to say, “Communism has been achieved.” Another person, facing a wall of rules, whines, “There are more and more rules all the time, and they’re stricter and stricter. This bowlful of Communist Party tastes worse and worse.” These are both negative words and actions, and Party cadres should always make sure not to act or speak in this manner. […]

I also interviewed some low-level cadres. They all felt that these types of negative words and actions are inevitable in the normal course of work, and that a reminder is necessary. […]

I realized that extensive research and solicitation of outside opinions went into this reminder handbook. The research workers discovered that some village cadres complain often, saying things like “Communist Party members only know how to hold meetings,” and that some cadres respond to questions from the masses with impatience, blurting out, “I am not a leader, don’t ask me.” This type of talk unintentionally harms the common people, straining relations between the cadres and the masses. The words and deeds listed here can arise within the Party ranks, or perhaps already have done among a small minority of members. Thus, taking these negative words and deeds, offenses that are easily committed, and giving them to everyone to compare, will be a constant reminder to cadres to say the right words and do the right things. [Chinese]

The Qianjiang Evening News provides examples of the improper words and actions listed in the book:

According to our understanding, in the event that a cadre is found to be speaking or acting in a manner catalogued by the book, they will be asked to speak with leadership, and it may even affect their personal evaluation.

“Politics is the leaders’ business. We foot soldiers are fine just supporting our families and getting by.”

“If something comes up you better not come to me. I’m not looking for a promotion, anyway.”

“This isn’t in my control. If you ask me about it I don’t know.”

“New Year came and nothing was sent. There was no New Year’s Eve dinner, either, no human touch.”

“Anti-corruption, rules, whatever. They’ve been doing this for years. It’s just a trend. We’ve gotten through it for two years. Just let it blow over and it’ll all be fine.”

“Such a low wage and so much work. I’ll get to it tomorrow. Even if I live forever I’ll never finish.”

“I’m better off putting less into this thankless work. If I do it well the boss won’t say so, but if I screw it up he’ll chew me out. Better not to take it on at all.”

“The leader never talked to me about this task, so I’m not clear on it. I’ll wait for the leader to request something and then see.”

“These days the common people are becoming more and more difficult. The less contact with them the better.”

“’Connecting with the people like family’ is just an image thing. Just get it over with. We don’t have the ability to really fix this problem, anyway.”

“You all are better off reporting this to someone higher up. Only they can do anything about it. Speaking with us about the matter is useless. We’re already working on something else.”

“How do you not understand what I’m saying? Alright, we’re done talking. We are aware of your concern, and will notify you if we have any new information.” [Chinese]

And from chapter 3 of the handbook, titled “What You Shouldn’t Say to the Masses“:

3. What You Shouldn’t Say to the Masses

32) The previous secretary was in charge of this. I don’t understand it.

34) Whatever you’re planning, tell me here.

36）The Communist Party (government) is just as bad as you say.

37) For some of our work we just go through the motions. It’s just for the higher-ups.

38) This is something the higher-ups are set on doing. We don’t want to do it, either.

39) Even if you did call the mayor’s hotline, you don’t want to talk to me.

40) You’d better report this to the higher-ups, only they can deal with this.

41) Come election time, vote for me. I’ll see that it pays off for you. [Chinese]

China Said to Be Holding Journalist Over Xi Letter

“Disloyal” Governor Removed in Drive for Unity Behind Xi