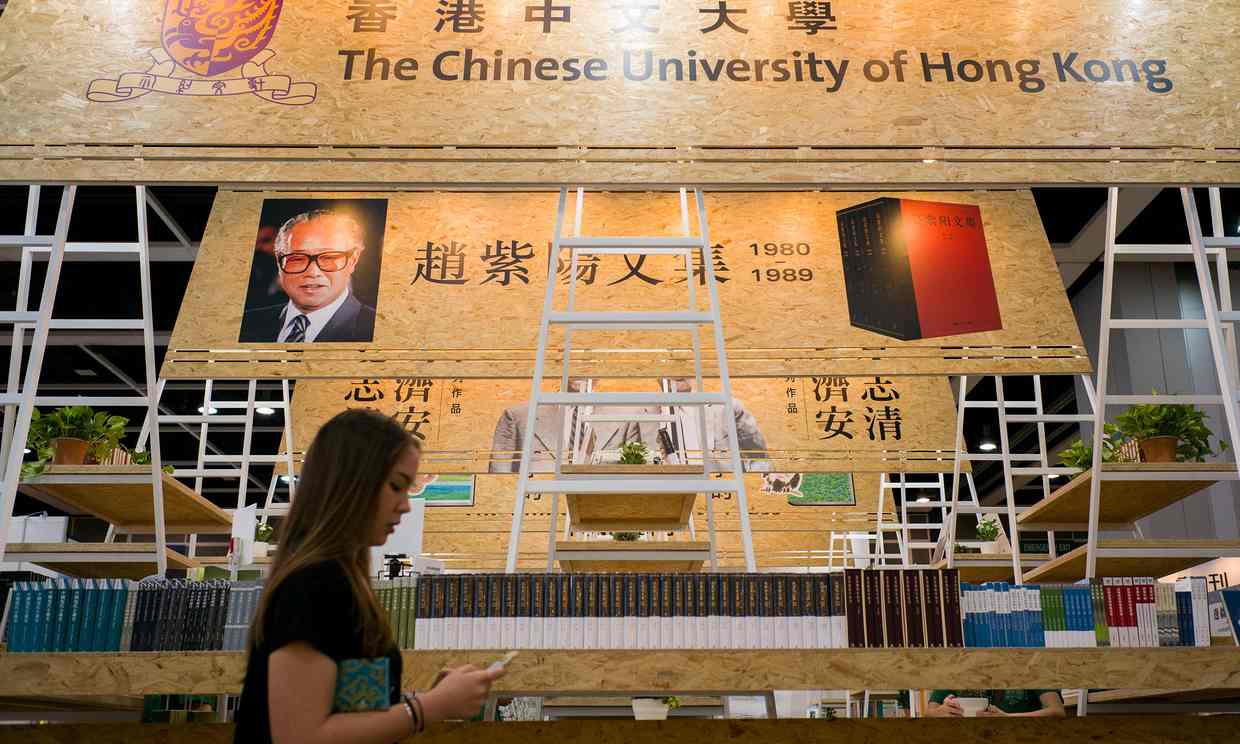 On Tuesday, a Shenzhen court sentenced two journalists for their involvement in political magazines that were published in Hong Kong but distributed in mainland China. From Kris Cheng:

Lam Wing-kee, a Hong Kong bookseller who was detained for eight months on the mainland for the same accusation, said the case showed “the Chinese government is not only gradually restricting Hong Kong people’s freedom of speech and of the press, it is destroying the One Country, Two Systems principle.”

[…] Wang and Guo, both Hong Kong permanent residents, pleaded guilty at the trial last year. The magazines, published through a company only registered in Hong Kong, often reported the internal political struggles of the Chinese Communist Party.

Lam, of Causeway Bay Books, was one of the five booksellers who went missing last year before reappearing on the mainland. He was detained and “confessed” to running an illegal book posting business. [Source]

While the exact nature of the five’s disappearances remains contested, their apparent abductions have cast a chilling shadow over Hong Kong and its publishers which is only likely to deepen with the news of Wang and Guo’s sentencing. At The Guardian, Ilaria Maria Sala examines the effect of such cases on last week’s Hong Kong Book Fair. This year’s event saw the release of a collection of works by the reformist former Premier and Party General Secretary Zhao Ziyang, who was removed from power in 1989 for his sympathetic stance toward the Tiananmen protesters, and spent the rest of his life under house arrest.

Though there are fewer stands selling political and “banned” books than in previous years, two major publishers have a big presence: Greenfield, a publisher and distributor with lots of politically sensitive titles in its catalogue, and Chinese University of Hong Kong (CUHK), which has published one the highlights of this year’s fair – a four-volume collection of private papers and speeches by the disgraced communist leader Zhao Ziyang, a reformist purged in the aftermath of the Tiananmen crackdown in 1989. Not too far away are Subculture, and Initium, two smaller publishers who carry politically sensitive books. Many customers hover nearby, but though they browse, sales do not appear so brisk.

“We have had no problem in printing or distributing our four volumes on Zhao Ziyang,” said one editor at CUHK Publishing, who asked to remain anonymous. “But the impact on the fair is very strong. The controls on travellers have been strengthened, and many who came to Hong Kong to buy books censored in mainland China have stopped buying them, as they may get into trouble at the border.”

[…] What has befallen the five booksellers has cast a heavy pall across the industry in Hong Kong. “We now have problems at both ends of the book chain”, says Bao Pu, of New Century Press, a publishing house known for high-quality political works banned on the mainland. “Printers are not willing to print politically sensitive books, throughout the Hong Kong printing industry. This is a very serious situation. The printers are deciding what can be read. At the other end of the chain there are the bookstores, and most of them will no longer sell this kind of book because it is considered dangerous. [Source]

The publication of the Zhao Ziyang collection was first reported last week by Reuters’ Benjamin Kang Lim and Ben Blanchard, who noted the documents’ continuing sensitivity:

“The Collected Works of Zhao Ziyang”, to be released by the Chinese University of Hong Kong Press, lifts the veil on behind-the-scenes wrangling among top leaders from 1980 to 1989, said Gan Qi, director of the publisher. “The information in these documents provides concrete first-hand evidence of the existence of such conflicts,” Gan told Reuters in an interview.

It is unclear if the documents still come under China’s state secret laws. If they are classified it could provide a test of Beijing’s commitment to academic and publication freedom in the former British colony, which reverted to Chinese rule in 1997. The territory was rocked recently by allegations that China had abducted and illegally detained five Hong Kong booksellers.

[…] Asked if they involved state secrets, Gan said: “What an academic publishing institution can and should do is abide by local laws and publication process.” [Source]

In light of the collection’s release, WeChat user Seeing-as highlighted a previously published General Administration of Press and Publication notice issued on August 7, 1989, detailing restrictions on publications related to Zhao Ziyang after his ouster. (The notice repeatedly and incongruously refers to Zhao as “Comrade”; he was never expelled from the Party, despite his removal from power.)

Notice on the Handling of Publications Involving Comrade Zhao Ziyang

Recently, several publishing work units have submitted inquiries about the handling of works involving Comrade Zhao Ziyang. This notice, in accordance with the spirit of the fourth plenum of the 13th CCP National Congress, is as follows:

1. In addition to the current temporary freeze on Comrade Zhao Ziyang’s reports and addresses, apart from National Representative Conference reports and government work reports, existing volumes of these materials should be withdrawn from sale, and from now on should neither be published separately nor included in any future yearbooks, periodicals, or other works. Comrade Zhao Ziyang’s addresses to the National Representative Conference and government work reports may no longer be published separately. Existing document collections including Comrade Zhao Ziyang’s work papers are temporarily frozen. From now on, Comrade Zhao’s important work papers may be only be included in such collections where truly necessary, on a strictly selective basis, following inspection and approval by the Central Propaganda Department.

2. Stop printing works in progress and reprints or second editions including Comrade Zhao Ziyang’s speeches and essays unless they are of particularly significant value. Those of truly great value should receive earnest and skillful treatment: quotes from ordinary speeches and essays should be removed; quotes from materials related to the National Representative Conference, government work reports and so on can be retained, but remove their personal attribution. If quoted speeches and essays contain errors of principle, immediately stop their sale and remove them from display.

3. Immediately stop the sale and display of existing biographical works on Comrade Zhao Ziyang by domestic or foreign authors, such as “Biography of Zhao Ziyang” and “The Making of a Premier: Zhao Ziyang’s Provincial Career.” Destroy existing stock; let publishing houses bear the economic losses. Without exception, stop work on works of this type still in progress; printing plates and pages already printed should be destroyed. Cancel all works on this topic without exception, and do not make plans for future publication.

4. From now on, no books or periodicals may carry Comrade Zhao Ziyang’s photograph (including group photos in which he is prominently featured). Remove his photograph from reprints and second editions without exception.

5. In order to guarantee availability in classes, elementary school textbooks and higher-level teaching materials that have already been printed and published and include Comrade Zhao Ziyang’s photograph or quotes from his speeches and essays need not be dealt with immediately, so long as these do not contain errors of principle. Remove them in future editions.

All relevant publishing and wholesale work units should immediately and earnestly inspect related circumstances upon receiving this notice, handle all current issues in accordance with its requirements, and submit a progress report to this office by August 20. Press and publication bureaus in all provinces, autonomous regions, and municipalities must supervise and check the implementation of this notice by local publishing and wholesale work units, and submit comprehensive summaries to this office by August 25.

Reporting on the opening of the book fair last week, Hong Kong Free Press’ Karen Cheung noted the characterization of the current situation in the industry by a political press director as a “white terror.” Cheung subsequently reported that the publisher of one political book released during the fair was allegedly threatened over a forthcoming book about Chinese President Xi Jinping. (Another book on Xi, and mainland authorities’ hunt for its author’s sources, is at the center of the five booksellers’ detentions according to Lam Wing-kee, one of the five.)

Song Pu is a lawyer and political commentator whose work has been featured in Stand News, Apple Daily, and BBC Chinese, amongst others. His new book, The Beginnings of CY Leung and Xi Jinping’s dictatorship, discusses Xi’s power struggle within the Communist Party and how he came to power, as well as his background and personality, according to Stand news.

[…] According to Song, [publisher Wu Yisan] told him that an individual claiming to be related to the Communist Party called him up after the press release came out. Wu said that his personal safety was seriously threatened. “He did not give further details of the threat – he just told me to not publish the book, because the Communist Party had already seen it,” Song said.

Song said that Wu was told writers could write whatever they want, even on topics such as the Cultural Revolution or Mao Zedong, but they were not allowed to write anything relating to Xi Jinping. Wu was warned that if he insisted on publishing the book, he would end up like “a certain somebody,” and although Wu did not explain what that meant, Song understood that it was a reference to the case of the missing Causeway Bay Books booksellers. [Source]

Xi has been the subject of a careful campaign to craft his image as the country’s “core leader.” In another display of sensitivity over his portrayal, editors at Tencent’s online news portal were disciplined last week over a typo that changed “[Xi] delivered an important speech” to “[Xi gave] an important speech in a furious ­manner.” Another slip in March saw a Xinhua report briefly call Xi China’s final, rather than highest, leader. In December, four China News Service journalists were suspended for referring to Xi’s resignation, rather than a speech, due to yet another typo. (Entirely separately, an Indian newsreader was fired in 2014 for mistaking Xi’s surname for a Roman numeral and calling him “Eleven Jinping.”)

Correction: This post originally stated that the GAPP directive on Zhao Ziyang was included in the new collection. It is not. Thanks to Julian Gewirtz for the correction.