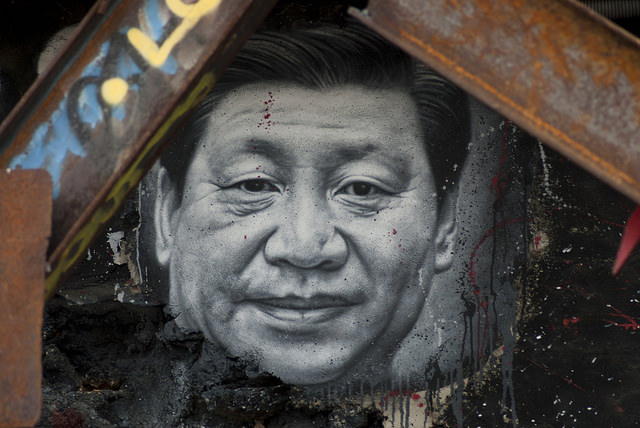 Since assuming office in 2012, President Xi Jinping has been portrayed in state media publications with more frequency and enthusiasm than any of his predecessors since Mao Zedong. From viral internet songs to calls to designate him as China’s “core” leader, the construction of Xi’s public image as a strong and popular commander has prompted concern of a growing personality cult. At The Diplomat, University of Macau’s Dingding Chen explains why the widespread speculation about the formation of such a cult around Xi is “mostly imaginative”:

Although many in China would agree that there was a serious personality cult issue during the Mao period, that era is long gone and will never come back. The reason is actually simpler than many would expect: today’s China is fundamentally different from Mao’s China. Most importantly, Chinese society has changed drastically, as we now live in an era of globalization. The Chinese people have now seen the outside world. Millions of Chinese tourists travel abroad every year, and more than 300,000 Chinese students go the United States alone to study every year. Unlike the Mao era, when most Chinese people were cut off from the outside world, today’s Chinese people know what is good for them and what is good for their country. Collectively, they do not want to go back to the Mao era and would not allow the country to go back to that era. Underestimating the power of the Chinese people in today’s politics is often an error made by Western observers of China.

There is also the problem of misunderstanding power consolidation in Chinese politics. While it is on the whole true that power should never be concentrated in one group or one person’s hands, certain conditions call for certain strategies. In traditional Chinese thinking, substance is more important than form. Who has power is less important than who can accomplish what with power. There is nothing wrong with one leader holding multiple titles as long as this leader can get things done. And President Xi Jinping is getting things done in China and, for that reason alone, the Chinese people overwhelmingly support his reform agendas. […] [Source]

Jude Blanchette, a director at the The Conference Board China Center for Economics and Business, also criticized the common view that Xi is building a personality cult. Blanchette writes that the media attention accorded to Xi is part of “official promotion” in a new media age that cannot be equated with the construction of a leadership cult like the one that took place during the Mao era:

It’s worth dwelling for a moment on the heights of the Maoist cult of personality, as I think when we compare it to what’s happening today, it’s pretty evident Xi has a long way to go if he wants to match Mao. Andrew Walter’s wonderful recent book China Under Mao: A Revolution Derailed highlights some of the absurdities of the Mao era:

“Virtually every home had its portrait of Chairman Mao on the wall or a bust of the Chairman on full display. Failure to display Mao paraphernalia could put one under political suspicion. In public spaces, large statues of Mao were erected on university campuses, in front of government office buildings, and in city squares. Carefully orchestrated parades with marches displaying scores of large Mao portraits or mobile floats with statues of the Charmin in a heroic pose were a common event during public holidays. Large stadiums were filled with thousands of performers who engaged in synchronized displays designed to glorify the Chairman and express loyalty. Individuals who inadvertently defaced portraits or the Chairman or who discarded newspapers with his photograph or writings could become targets of harrowing loyalty investigations. Families saved virtually every item with Mao’s image because it was politically dangerous to discard them.” (Pg. 277-278)

[…] A Xi Jinping pin. A song and dance routine. Some homemade (and official) viral videos. Taken together, these don’t seem to me to be a cult of personality, or even the beginnings of one. They may be creepy and a break with the recent experience of the Hu-Wen era, but the official promotion of the leader is not the same thing as the deification of the leader.  This is not to deny the full-throated assault to bring Xi Jinping to the front and center of social and political discourse. From the proliferation of Xi-themed official websites and Wechat channels to the intra-Party campaigns to “Study the important Speeches of Xi Jinping,”  we’re seeing much more of Xi than we did of Hu Jintao or even Jiang Zemin. Yet the key attributes of Mao’s cult — it’s mass scale, it’s ritualistic nature, it’s penetration into the deepest levels of society, are clearly lacking. Given Xi’s concentration of power and the assault on intellectual (and actual) freedom, we’re right to be on guard, but let’s make sure we’re making the right diagnosis. [Source]

The discussion of an emerging cult of personality around Xi Jinping took place alongside his unprecedented consolidation of power. From tightening media and internet controls to calls for party unity, Xi has sought to cement his position as China’s top leader. This has been met with growing resistance in recent months as the discontented political and social elites have begun issuing open challenges to Xi’s leadership. In March, Wujie News published an open letter that called for Xi to resign. Last week, Peking University’s legal scholar He Weifang issued an open critique attacking the Communist Youth League’s status as a publicly funded organization.

At the same time, worker strikes and labor unrest has been steadily on the rise in recent years as China’s economy continues to slow. The possibility of a hard landing could unravel the current structure of governance unless Xi Jinping and his administration implement appropriate political reforms. At Prospect Magazine, Roger Garside reports:

For more than three decades, from the start of the “Reform Era” in 1979 until now, China has been governed by an unspoken deal between its Communist Party and the people: “We let you make money, and you let us rule.” Now that deal is falling apart. After the longest period of rapid growth achieved by any people in modern history, the economy is making a hard landing: millions of workers are being laid off or going unpaid for months at a time, capital has been fleeing the country at an alarming rate, and international bankers and investors no longer believe what the Government tells them about the growth rate. “They are lying to us,” one told me recently, “GDP growth is not 6.5 per cent. It is half that, or less.”

[…] The Party faces a fundamental contradiction between the one-party dictatorship and the reforms that are essential to tackle its social and economic problems. The liberalisation of thought and expression needed to stimulate creativity and innovation conflicts with ideological control by the one-party state. Further liberalisation of the economy, allowing market forces to allocate resources and take control of the commanding heights of the economy, would undermine the Party’s grip on the economic life of the nation (which the one-party state system rests on).

Only democratic political reform could persuade the people to accept the short-term pain and uncertainty inherent in letting market forces replace political expediency, at a time when the economy is making a hard landing. But President Xi Jinping has categorically rejected political reform: instead he has reinforced censorship, and intensified oppression. However, other high-ranking leaders may regard his strategy as counter-productive and see in political reform the ONLY chance of salvation for themselves and the nation. They could find allies among the powerful enemies he has made through his anti-corruption campaign. […] [Source]