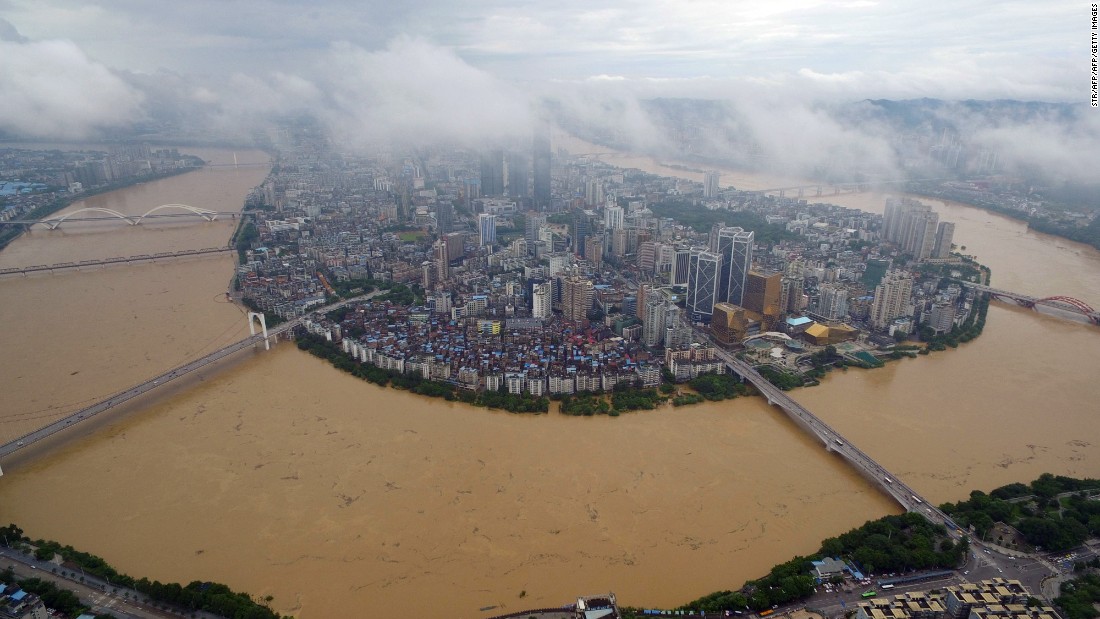 Flooding across central and southern China has killed more than 100 people and submerged countless neighborhoods in one of the worst floods the country has suffered since 1998. At Quartz, Zheping Huang reports that part of the problem is the lack of proper drainage systems in hard hit cities like Wuhan, where overdevelopment and government corruption has slowed the construction of essential flood defenses.

Wuhan’s excessive urban development is partly to blame. Known as “the city of a hundred lakes,” Wuhan doesn’t live up to its name anymore. From 1949 to 2015, the number of the lakes in Wuhan’s urban areas dropped from 127 to 40 because they were filled for construction, which effectively makes it harder for the city to absorb flood water.

[…] The construction of Wuhan’s dikes, to keep floodwaters out, has been held back by corruption. In 2014, a local official surnamed Tang, who was responsible for a one-billion-yuan dike construction project between 2005 and 2013, was charged with taking bribes of 1.6 million yuan, local media reported at the time. Two other officials were also charged with bribery at the time. One dike, which should have been upgraded as part of the project, was breached by the flooding last week,news portal Sohu reported.

Corruption and wasteful spending scandals are not uncommon in China’s flood-control projects. In 2011 at Jingdezhan, an eastern city often stricken by floods, local officials finished only half of a dike while spending more than 70% of the 300-million-yuan budget, because they spent the money on landscaping, state news agency Xinhua reported. In 2008 in southern Nanning city, Zhang Jianhui, then head of the local government’s water conservation department, was sentenced to death for taking bribes of 26 million yuan over eight years, Xinhua reported. [Source]

Residents in Wuhan are now demanding answers from government officials for the city’s lack of adequate drainage. From The New York Times’ Chris Buckley:

Wang Xinyu, a university student who grew up in the city, earned nationwide attention this week for demanding that city officials disclose how much they spent on upgrading the city’s drainage. Three years ago, officials promised that they would invest 13 billion renminbi, or nearly $2 billion, on enhancing pipes and channels to drain floodwaters. Ms. Wang suggested that they had fallen far short.

“I just want to know how that 13 billion was spent,” Ms. Wang said in an interview with Sina, a Chinese website. “Three years have passed, but there has been no solution.”

Other residents of Wuhan have complained that reckless development filled in lakes that once absorbed and slowly expelled water. The government also allowed the expansion of housing in vulnerable areas, they say. Lakes around Wuhan have shrunk by nearly a third in the past 30 years, according to one estimate cited in The Beijing News.

“Lakes are natural sinks,” Mr. Ke, the environmental activist, said. “When there are heavy rains, the water that once would have been expelled into lakes pools up in residential areas.” [Source]

Buckley reports that Chinese Prime Minister Li Keqiang and other leaders have stressed that “the government is better prepared than ever” to fight this year’s flood despite evidence suggesting otherwise. Meanwhile, reports of flooding by state news service Xinhua has focused on the positive aspects of  government disaster prevention and relief work:

The 40-plus members of Leng’s division have been working day and night over the past month to strengthen dams, rescue residents from their flooded homes and send anyone sick or injured to hospital.

“A few days ago, we were working to strengthen the dam in Jingdezhen City, which was almost inundated,” Leng said. “The troops kept working in the water and did not sleep for more than 50 hours.”

Since the high water season began in early June, China has mobilized soldiers, officials and the public to guard against flooding, which had left 160 people dead and 28 missing in 11 provincial regions by Thursday.

[…] This week, Premier Li Keqiang said China should prepare for an arduous campaign against floods as July-August is “a key period for flood control.”

The People’s Liberation Army and armed police will send more troops to disaster-hit areas on the direct orders of President Xi Jinping. [Source]

Elsewhere, China Daily reported the story of a policeman’s son, who wrote a diary entry titled “I worry about you, Dad” after his father left home to join the flood relief effort.