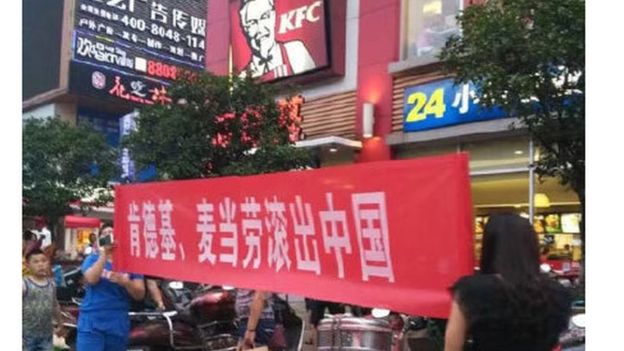 Following an international tribunal’s ruling against China’s claims in the South China Sea, several small scale protests against the decision have sprung up throughout China. While authorities have in the past tolerated—or even encouraged—public displays of nationalistic protest, they are now taking efforts to limit demonstrations, ordering the deletion of related information on the internet or instating “wartime stability procedures” at a high-profile public university. Chinese state media, while in firm agreement with protesters over the “law-abusing” tribunal’s decision, has also been speaking out against grassroots boycotts aimed at U.S. companies such as Apple and KFC, warning that “serious social and personal damage” could come from unrestrained demonstrations. Such “extreme behavior” has been pre-emptively described as a product of “ulterior motives” and an effort to undermine and discredit “true patriotism.” In a comic shared on WeChat, cartoonist “My Name is Police Chief” (我的名字叫警长) commented on authorities’ contradictory—and perhaps hypocritical—behavior, lashing out at both protesters and foreign governments after the tribunal’s decision:

At The Wall Street Journal, Chun Han Wong rounds up state media attempts to cool the fervor of nationalism on the streets of China:

“In the age of economic globalization, many products used in daily living, big and small, are ‘hybrids,’” using parts from both the U.S. and China, the People’s Daily said in an essay published Tuesday on its WeChat social-media account. “You couldn’t boycott them even if you wished.”

“With so many ordinary Chinese folk working in the [fast-food] industry supply chain, are you going to feed them if they lose their jobs?” the newspaper wrote. “The internet was invented by the U.S., so should we boycott the internet and retreat into the pre-internet age?”

State-run China Daily, for its part, decried the anti-KFC protests as a show of “jingoism that does a disservice to the spirit of devotion to the nation.”

“Patriotism is not the hotchpotch of actions that self-claimed patriots select to do,” the English-language newspaper said in a Wednesday commentary. “Nor can it be used as a label to provide self-justification and legal grounds for extreme actions that violate the law.”

The Communist Youth League went further in its criticism, alleging that some protesters were antigovernment elements seeking to discredit well-meaning patriots by staging outlandish demonstrations. [Source]

More on simultaneous state media condemnations of both the tribunal’s ruling and the anti-KFC protests, and on online counter-protests from KFC customers, from the AP:

Along with the KFC protests, images have circulated online of young Chinese wearing scarves emblazoned with patriotic slogans smashing their iPhones in protest over the ruling. Such actions are generally ascribed to the internet-savvy “angry youth” born in the 1980s or after and raised on a steady diet of aggressive nationalism.

Yet, the KFC protests have also sparked a backlash online with some of the fast-food restaurant customers posting photos of themselves sitting in front of a bucket of chicken with axes or other weapons and signs reading “Patriotic hooligans, try harassing me and I’ll take you out.”

[…] Since it was handed down, the government and state media have kept up a steady drumbeat of criticism of the Philippines, the US and others and repeatedly attacked the integrity of the Hague-based tribunal. [Source]

Chinese authorities in Lianyungang, a city in Jiangsu province, have said that citizens should “respect the law, not participate in illegal assembly, rallies, demonstrations [and] not believe or spread rumours” in light of recent protests outside Kentucky Fried Chicken (KFC) branches.

[…] According to Beijing News, Huaian police said that those who are expressing their patriotism deserve to be recognised but they should not cross the legal border and should not do things that are too extreme. [Source]

Sixth Tone, a flashy state-run new media venture, reported on the wave of nationalistic displays outside of KFC outlets, and on online public anger expressed towards those who organized the demonstrations. The report has been taken down, presumably in line with central propaganda directives not to hype the demonstrations, but is still available via Google cache:

U.S. fast food giant KFC, which by the end of 2015 had more than 5,000 outlets in China, has become the target of such activism, with protestors outside stores brandishing banners labeling KFC customers traitors, among other things.

Though rejection of the arbitration award has been almost universal within China, social media users were quick to call into question the actions of staff of a training center who were reported to have led a delegation of young children to conduct a protest outside a KFC outlet in the country’s eastern Shandong province on July 19. Photos posted to microblog platform Weibo on Tuesday show a group of young children standing before a KFC store in the city of Tengzhou, wearing red caps and white shirts emblazoned with a red map of China. That post has been deleted, but a cached version was available as of Wednesday.

Following speculation by social media users and an article on online news outlet Sohu that called into question the veracity of the report, the same Weibo user — “Pi Ren Zhou Yu” — released a short video in the early hours of Wednesday morning showing children shouting “Long live China,” led by a male adult voice. The video was embedded in a post entitled “The Tengzhou School Students Boycott Incident: Just Who Is Telling Lies.”

[…] Reactions on social media were more scathing of the actions of the protest’s organizers. “Poisoning the next generation. It’s mean and shameless, using kids to carry out bullshit demands on adults,” wrote the author of the Tuesday post’s top-voted comment. “How did they become teachers? Did they inform the parents of this beforehand?” questioned another. [Source]

While some online have reportedly lashed out against instigators, others have rallied to attack perceived support of the tribunal’s decision. The Hong Kong Free Press reports on Chinese netizen comments to a Japanese YouTuber’s recent video:

Japanese YouTuber Yuka Kinoshita, who is known for consuming large quantities of various food items on camera, has been subjected to the wrath of Chinese netizens after posting a video of herself eating 137 bananas on Saturday.

Internet users from China questioned whether Kinoshita was eating bananas that originated from Philippines, and if 137 bananas was an allusion to China’s 1.37 billion population, Ming Pao reported. The video was posted shortly after the South China Sea ruling last week.

“During this sensitive period, you eat 137 bananas from the Philippines to insult China – do you have brains? Do you think us Chinese people can be easily bullied?” one comment said. [Source]

As authorities attempt to cool down the public anger, the South China Morning Post’s Natalie Mu reports that a Chinese tech company has threatened to sack any employee who buys the soon-to-be released iPhone 7, and to reward those who replace their Apple phone with a China-made device:

Hangzhou Bina Industrial Technology Company, which employs 50 people, issued its stern warning in what it called a “Patriotic Notice”, which was sent to all employees on Monday, the news portal Sohu.com reported.

[…] The move appears to be in response to widespread anger on mainland social media over what appeared to be an apparent iPhone software “glitch.

When iPhone users typed out the Chinese pinyin word “jichen”, meaning “hit and sink”, the word “China” would automatically appear as the first recommended word of choice.

[… In addition to promising iPhone 7 owners a pink slip,] it also said it would pay bonuses of 1,000 yuan (HK$1,160) to members of staff who replaced their iPhone 4 with a mainland-brand phone, 1,500 yuan if they replaced their iPhone 5 and 2,500 yuan for exchanging an iPhone 6. Mainland media has reported Apple rejecting the online claims that is was anti-Chinese. […] [Source]

[This post was corrected to clarify that the ruling was issued by an international tribunal set up under the United Nations Convention on the Law of the Sea, not the Permanent Court of Arbitration.]