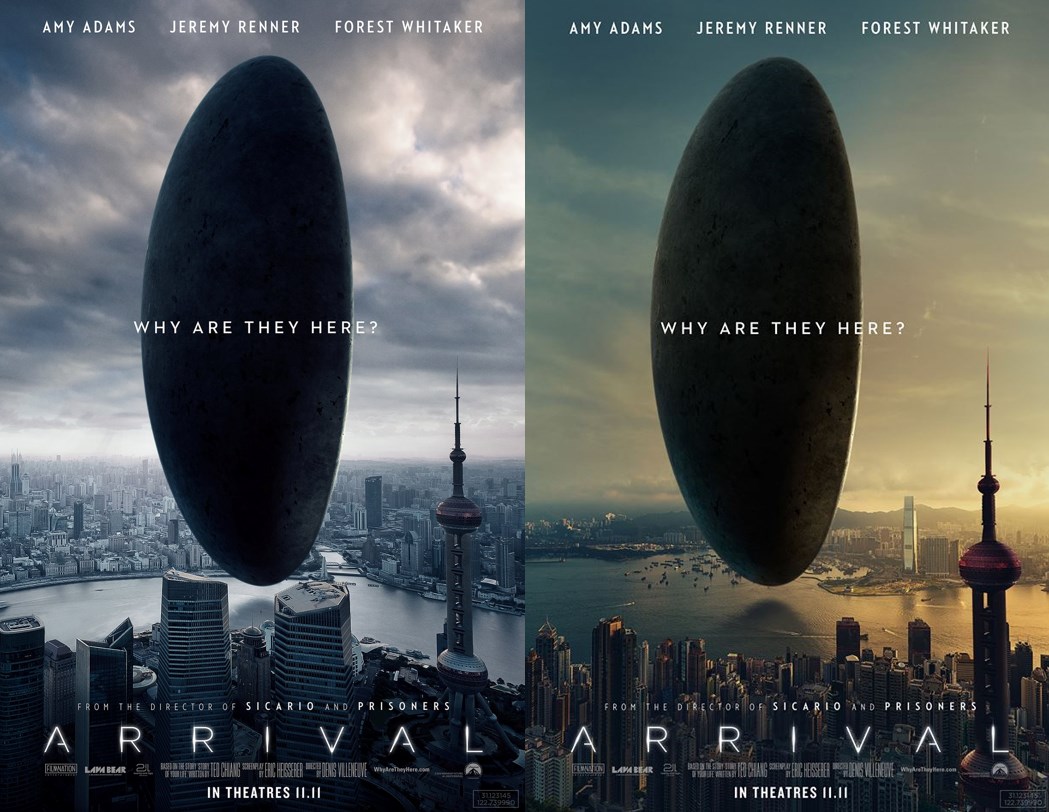 “Why are they here?” asks a tag line on a poster for the forthcoming Hollywood science-fiction movie “Arrival,” an apparent reference to the visitors aboard a mysterious spaceship hovering above Hong Kong’s harbor.

Yet it was another alien object in the poster that captured the most attention: an iconic Shanghai building sticking out from what is supposed to be the north side of Hong Kong Island. In the hours after the poster went up on the film’s promotional Facebook page on Tuesday, hundreds took to the comment section to protest the film with the hashtag #hongkongisnotchina.

“WHY ARE THEY HERE?” asked a Facebook commenter named Chung Ho Dic, using all caps.

By Friday afternoon, the poster had been removed from the page. And statements posted on the film’s official Twitter and Facebook pages blamed a “third-party vendor” for making an error in the poster. A new poster was put up featuring the same Shanghai Oriental Pearl Radio and TV Tower, this time in its rightful city, though that did not appear to appease all Hong Kong commenters, whose disgruntled statements kept pouring in. [Source]

Arrival put the Pearl Tower back to its rightful place, but that hasn’t appeased all HKers https://t.co/SdxFWjX24e pic.twitter.com/PrnIYeQHRi

An error was made in an “Arrival” poster by a 3rd party vendor. It’s been corrected and we are disappointed we didn’t catch the error.

Even after the correction, one commenter said: “No excuses! You guys really did make a big mistake. Hong Kong is always different from China. This is totally unacceptable for real Hong Kong people.”

“Why are they (the Chinese colonist) here?” said another, playing on the movie’s tagline “Why are they here?”

Some speculated that the third party vendor had an agenda, while others tried to explain to the US studio and people abroad why Hong Kong and China are different.

“… it was like calling a Northern-Irish as British, or a Catalan as Spanish,” said one comment. “It’s worse in this case as we’re talking about the Commie just across the fine border. You can’t imagine how much harm the Commie have done to Hong Kong so far.”

Troubled by the Chinese government’s increasing influence over the city, the localist movement has gained momentum in recent years. Localists emphasise Hong Kong’s separate identity and oppose the “mainlandisation” of the city. [Source]

From Vivienne Chow at Variety:

[…] Local politicians also took advantage of the designer’s insensitiveness and used it for their campaigns ahead of the city’s September Legislative Council election.

Horace Chin Wan-kan, dubbed ‘Godfather of localism,’ who is running in the election, commented: “The movie adaptation of the sci-fi novel ‘Arrival’, which obtained the Nebula Award, [has] decent director Denis Villeneuve and actors Amy Adams [and] Jeremy Renner. However, everything is ruined by this improper poster.” [Source]

Arrival’s misstep is the latest case of foreign companies offending the political sensibilities of Hong Kong residents. Lancôme’s retail stores in Hong Kong were forced to shut down in June amid protests after the cosmetics company cancelled a promotional concert featuring pro-democracy singer Denise Ho, a decision that was itself allegedly made in response to mainland criticisms of Ho’s politics. Nor is this the first time that Hollywood, ever keener to woo China, has stumbled over political sensitivities around the nation’s periphery.