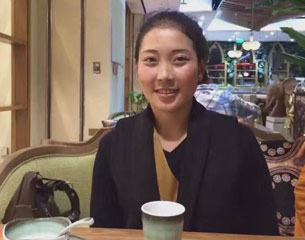 Prominent Tibetan religious leader and Dalai Lama supporter Tenzin Delek Rinpoche died in July 2015 while serving a prison sentence for alleged involvement in a series of bomb blasts in Chengdu, Sichuan. Initially sentenced to death on charges of terrorism and incitement of separatism, his sentence was later commuted to life imprisonment, and in 2005 reduced to 20 years. He had denied the charges against him and maintained his innocence throughout.

Tenzin Delek’s niece Nyima Lhamo, who fled to Dharamsala last month, is now speaking out about the suspicious circumstances surrounding her uncle’s death. Lhamo and her family believes Tenzin Delek died as a result of torture and not from a heart attack as Chinese officials have claimed. From Reuters:

In an interview on Thursday in the hill town of Dharamsala, where a self-styled Tibetan government in exile is based, she said Chinese officials denied relatives access to Tenzin Delek for nearly two years before his death.

[…] “Eventually, on July 12, they were told that Rinpoche had died. We were given different times of death by prison staff and we were doubtful,” Lhamo told Reuters.

Previously, Tenzin Delek told Lhamo’s mother he had been tortured, including being beaten and thrown to the ground, and doused with hot and cold water. “Officers were constantly torturing him and taunting him,” she said at the newly built, and nearly empty, Tibetan Reception Centre for Refugees.

[…] Lhamo reached the prison on July 14, when officials again stonewalled on the cause of Tenzin Delek’s death and refused to share any medical reports. They allowed her to see his body only after she tried to hang herself with her scarf outside the jail.

“When they finally allowed us to see the body…(it) was covered with monk’s robes and we could not see much, but I saw his lips were dark,” said Lhamo, who spoke with detachment and appeared exhausted.

“The monks who had cleaned Rinpoche’s body had mentioned that the nails were black and there was a abnormal soft hollow at the back under his head.” His body was cremated the following day. [Source]

The Chinese government maintained that Tenzin Delek’s rights were not violated during his time in prison. At Reuters, Ben Blanchard and Jake Spring report:

“China is a country ruled by law, during Tenzin Delek Rinponche’s sentence his legal rights were protected according to relevant laws,” the foreign ministry said in a statement sent to Reuters late on Saturday.

The foreign ministry repeated that he died suddenly of heart related problems and that hospital rescue efforts were ineffective. [Source]