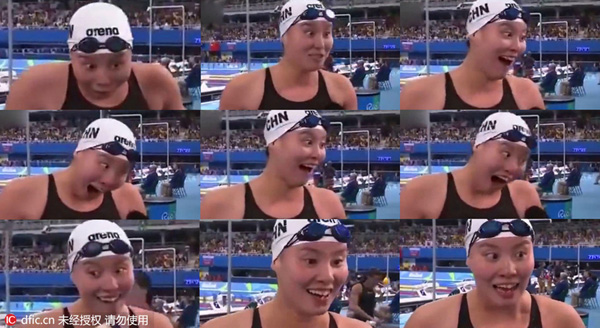 China’s internet can’t get enough of the 20-year-old’s exaggerated facial expressions and humor. After qualifying for the final of the women’s 100-m backstroke at the Rio Olympics on Aug. 7, Fu gave an interview that’s since gone viral.

“I was so fast! I’m really pleased!” she said in a state of shock after clocking in at 58.95 seconds, a new personal record. “I didn’t hold back… I’ve already used all of my mystic energy.”

Fu went on to win a bronze medal in the race on Monday (Aug. 8).

Since then, Fu, from the southeastern city of Hangzhou, has gained more than three million fans on Chinese social networking site Weibo in two days. Her catchphrase “mystic energy,” or “prehistoric power,” has become a meme, and her super-excited expressions have been turned into emoticons. In an interview Monday, her reaction won over Chinese netizens’ hearts again.

“Maybe it’s because my arms are too short,” she sighed as she mistakenly thought she didn’t win a medal. She couldn’t clearly see the rankings on the screen because she is nearsighted, she later explained. [Source]

Shanghai Expat gathered and subtitled some of Fu’s finest moments:

A sequel, from What’s On Weibo:

In a country that has long pushed athletes to win gold medals at the Olympics, Fu’s unexpected rise to internet fame “seemed to signal shifting social perceptions about the meaning of sport,” writes Chun Han Wong at The Wall Street Journal.

“‘Primordial Girl’ and the netizens who appreciate her have taught all of us a lesson: sport is about the struggle and, especially, enjoyment, but most definitely not about spinning gold,” the Communist Party’s flagship newspaper, People’s Daily, said in a Tuesday commentary.

“The warm support from netizens,” according to the newspaper, “shows that public attitudes toward competitive sport and the Olympics have sublimated to a higher level.”

Ms. Fu’s fans, for their part, credited her “authentic” demeanor, which contrasted with the mild mien typical of Chinese Olympians. “We love your happy optimism and strong personality,” a Weibo user wrote on Ms. Fu’s microblog. “That’s what makes a true athlete.”

Winning used to be everything for China’s Olympians, virtually all of whom came through a grueling state-run sports regime that fetishized success. Athletes who strike gold can expect fame and fortune, while those who disappoint often suffer neglect or even ignominy. [Source]

The apparent change in public attitudes is also accompanied by a move towards greater appreciation for the ethos of sports and respect for athletes as individuals. Fu’s candor and self satisfaction is unusual among China’s top athletes, who are often expected to put the country’s honor before personal pride. From The New York Times’ Austin Ramzy:

Her ecstatic expression captured a rare outlook in Chinese Olympic sports, where the drive for gold has long dominated, and silver is for the first loser. But Ms. Fu seems unlikely to join the ranks of Chinese athletes who are forgotten for not reaching the top of the Olympic podium. Instead, her unbridled happiness at achieving a personal best has resonated widely.

“To exceed one’s self is even better than winning a gold medal,” a commentary in The Beijing News said of Ms. Fu’s performance. Online, pictures of her expressions have been juxtaposed against other Chinese athletes whose grim faces betray the intense pressure of Olympic expectations.

“The reason Fu Yuanhui has been so popular also explains how people today don’t just watch that split second of winning a gold medal,” a commenter in the eastern city of Hangzhou wrote on Weibo. “What’s more important is to enjoy the athletes’ true Olympic spirit.” [Source]

Fu has since gained three million new followers on Chinese social media, where fans have transformed her exuberant expressions into GIFs, memes, and emoticons.

The BBC’s Carrie Gracie expressed some skepticism about the reported shift in Chinese attitudes toward the games, noting a litany of complaints since they started.

“As we mature in mentality, learn how to appreciate competition, and become able to calmly applaud our rivals, we showcase the confidence and tolerance of a great country,” suggested China’s state broadcaster CCTV on day one of the Rio Olympics. If only.

[… I]f CCTV believes tolerance and confidence should be the overriding Olympic mood, it needs to get that message across to its viewers.

According to one poll, more than 80% of the public think Rio’s judges have a sinister bias against China. Only 16% believe other countries might equally be the victim of bad calls.

[…] The Olympics come a month after the Hague tribunal ruling on the legality of China’s claims in the South China Sea, and the tsunami of official outrage over that ruling still conditions the public mood.

The message then was that a ruling in international law which didn’t go China’s way was thereby null and void. Moreover, the judges are brainless or paid, or both, so the narrative went.

If rulings in international law are optional for the Chinese government then who can be surprised if the Chinese public applies the same principle to rulings in sport? [Source]

See also a post by Asia Society’s Eric Fish on the history of China’s “hurt feelings” at the Olympics.

Fu’s winning personality and international popularity contrast with anger over clashes between her teammate Sun Yang and Australian swimmer Mack Horton that had previously dominated China-related Olympic news. Horton triggered netizen outrage after calling his Chinese rival Sun Yang a “drug cheat.” Sun was suspended for three months in 2014 after testing positive for a then-banned substance, which he claims to have consumed for medical purposes based on an out-of-date substance list. Chinese netizens have demanded an apology from Horton, and several websites in Australia were allegedly hacked following the feud.

While the accusations against Sun may be questionable, the Chinese Swimming Association has confirmed that Olympic swimmer Chen Xinyi tested positive for hydrochlorothiazide on Sunday, the same day she finished fourth in the women’s 100m butterfly final. Josh Chin at The Wall Street Journal reports:

The swimmer, 18-year-old Chen Xinyi, finished fourth in the 100-meter butterfly final on Sunday. Xinhua said she tested positive the same day for hydrochlorothiazide, a diuretic used to mask the presence of banned substances in urine.

On Friday afternoon, Ms. Chen accepted a provisional suspension and is suspended from competing in Rio, according to the Court of Arbitration for Sport. Chen had been scheduled to swim in a 50-meter freestyle heat this afternoon but did not swim.

Earlier Friday, Ms. Chen has submitted a second “B” sample to the International Olympic Committee and applied for a hearing, it said. [Source]

Back in the Swim

At Beidaihe, A Swim Test for China’s Leaders