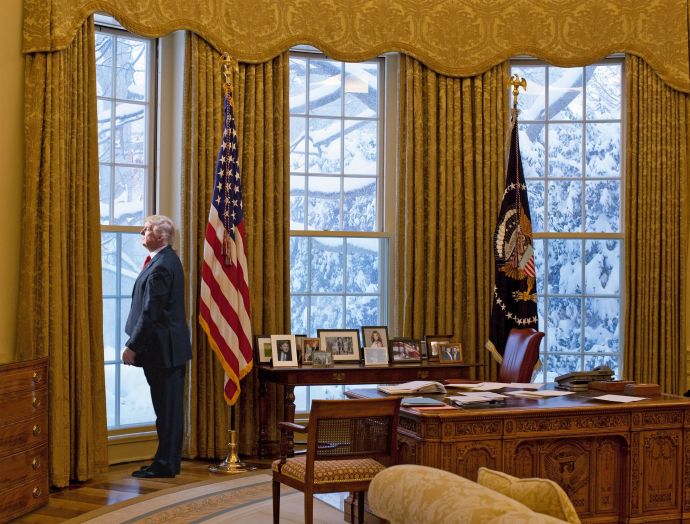 Republican presidential candidate Donald Trump has famously spoken a lot about China. With his victory in November looking less unlikely than it has for weeks, the question looms of how these pronouncements would translate into actual policy. The New Yorker’s former China correspondent Evan Osnos touched on this in a lengthy essay examining the prospect of “President Trump’s First Term” more generally:

In some cases, Trump’s language has had the opposite effect of what he intends. He professes a hard line on China (“We can’t continue to allow China to rape our country,” he said in May), but, in China, Trump’s “America First” policy has been understood as the lament of a permissive, exhausted America. A recent article in Guancha, a nationalist news site, was headlined “trump: america will stop talking about human rights and no longer protect nato unconditionally.”

Shen Dingli, an influential foreign-policy scholar at Fudan University, in Shanghai, told me that Chinese officials would be concerned about Trump’s unpredictability but, he thinks, have concluded that, ultimately, he is a novice who makes hollow threats and would be easy to handle. They would worry about the policies of a President Hillary Clinton, who, as Secretary of State, oversaw Obama’s “pivot” to Asia, intended to balance China’s expansion. “She is more predictable and probably tough,” Shen said. “Human rights, pivoting—China hates both.” [Source]

Lord, who was ambassador to China under presidents Ronald Reagan and George H.W. Bush from 1985 to 1989 and assistant secretary of state under Bill Clinton from 1993 to 1997, said that, while China and the U.S. are still doing business and managing to keep major sources of conflict in check, China is taking an increasingly hostile posture toward the U.S. through state media and official rhetoric. It has also ramped up repression of NGOs, media, and academia that might bring in foreign influence. Xi, Lord said, is “anti-American” and won’t be convinced that the U.S. isn’t trying to subvert China.

[…] Neither Schell nor Lord knew what to make of the prospect of a Donald Trump presidency. “Nobody knows what China policy would look like under Trump — above all not Trump himself,” Lord said. “I’m serious. This man is incoherent and has no idea what he’s going to do.” [Source]

The two pieces include a range of advice for the next president, from Schell’s nomination of Bill Clinton as a special envoy to rebuild trust with Beijing, to Trump advisor Dan DiMicco’s suggestion to grab China “by the nuts” and warn it, “‘You don’t hurt me, I won’t hurt you.’”

Read more on Donald Trump and Hillary Clinton, and on Xi’s fear of “hostile foreign forces” from CDT; from The Washington Post and Bloomberg on the likely effects of Trump’s professed trade policies against China; from The Wall Street Journal on his outdated accusations of currency manipulation; from McClatchy on the roots of Trump’s antipathy towards China; and from the Associated Press on the role that China has played in fueling support for Trump.