China: A Life in Detention 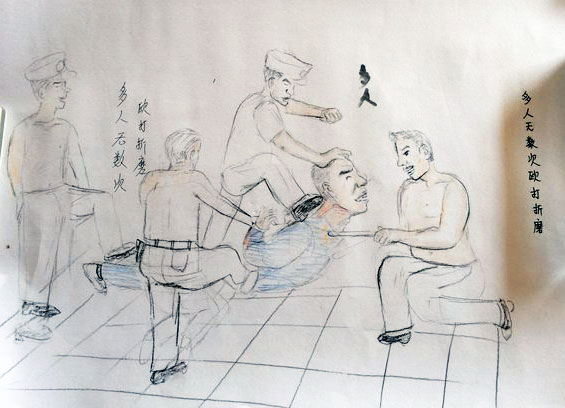 The New York Review of Books has published a translation of a text written by health rights activist Yang Zhanqing during his stint in Henan Province’s Zhengzhou No. 3 Detention Center, where he was detained together with fellow activist Guo Bin on charges of “illegal business operations.” Yang’s writing provides a rare glimpse into the inner workings of China’s detention facilities with a particular focus on the use of torture to dehumanize inmates.

To relieve the insufferable boredom of this place, I have composed a casual poem:

My little masterpiece reflects daily life at our Detention Center, where neither spoons nor toilet paper is provided to detainees. This is by policy, not accident. […]

[…] The line in my poem about buns refers to another policy at the Center: detainees eat by hand. We are ordered to squat in rows and to pass steamed buns down a line. In addition to the buns, we are given bowls of soupy dishes containing chunks of turnip and cabbage. But we are given no spoons or chopsticks, so when we are finished drinking the soup we have only our hands for getting the chunks of vegetable into our mouths. By the end of a meal everyone’s hands are wet. A few do have spoons, purchased from funds on deposit, but another rule prohibits the lending of spoons.

[…] It is the same at our Center, whose regimen can be explained only as an intentional reduction of people to animals, without dignity and without shame. The word “torture” comes from the Latin torquere “to twist,” and our Center has its repertoire of twisting techniques. People are forced to choose between the humiliation of washing their anuses by hand in public and committing the even greater “crime” of stealing toilet paper, between eating cooked turnip by hand or committing the offense of borrowing a spoon. [Source]

Thousands of Falun Gong practitioners are held in China’s detention centers. These prisoners of conscience are often targeted for abuse and torture, which are used to force the detainees to change their spiritual beliefs, according to a report by Megan Palin of news.com.au:

Falun Gong practitioner Hongbin Lin, 43, was a naval officer in the Chinese military who went from “heaven to hell” when he was persecuted for his spiritual beliefs.

[…] Mr Lin said he endured electric shocks while in captivity at the hands of prison authorities. He said criminal inmates were made to help the guards persecute Falun Gong practitioners.

[…] “There would be two electric batons, two policemen, with criminals surrounding me. They pressed me down, stepped on my legs, some grabbed my arms, twisting them behind my back. “(One of them) pressed me on the floor, with both of my legs stepped on by 10 plus people. “Then they shocked me on my head, face, and lower body. They shocked me until their batons ran out of power.

“After shocking me, shackling me to the iron bedframe and depriving me of sleep which lasted up to 15 days at one stretch.”

A recent report by Canadian politician David Kilgour revealed that Falun Gong practitioners, along with ethnic minorities and underground Christians, are also the main targets of large-scale organ harvesting taking place in the country.

On the Sinica Podcast, Kaiser Kuo and Jeremy Goldkorn interviewed an American named Michael Manning about his time inside the Beijing No. 1 Detention Center. Manning spent more than seven months inside the facility for illegally selling cannabis. In contrast to the experiences of detained Chinese rights activists and Falun Gong practitioners, Manning did not endure abuse or torture.