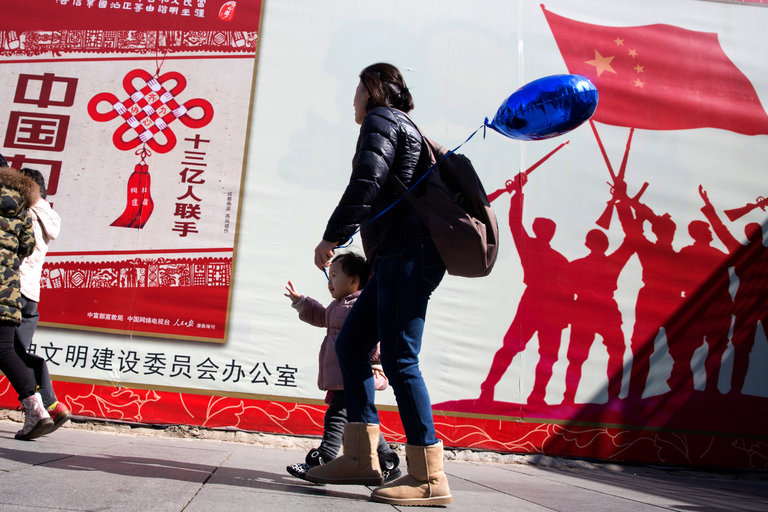 Economic concerns and financial pressure, particularly with regard to rising housing and education costs, have led many Chinese families to forgo having a second child despite the end of China’s controversial one-child policy in October 2015. The public’s reluctance to raise more children has prompted local officials in the city of Yichang to issue a public letter online calling on all Party members to fulfill their duty by having two children. From Didi Kirsten Tatlow at The New York Times:

“We require all party members and Communist Youth League members in city departments and companies, especially cadres at all levels, to stand at the forefront and take a high degree of responsibility for caring for the country’s happy future, the people’s welfare and their own descendants to come, by thoroughly implementing the meaning of the ‘two-child policy’ and using practical actions to lead the way in responding to the party’s call.”

[…] Several days after it was published on the Yichang government website with the red stamps of a clutch of departments indicating wide local support, the letter disappeared, a sign it was politically sensitive. The appeal for more children could be seen as implicit criticism of Beijing’s population policies of the previous 36 years.

[…] Suggesting why the topic was sensitive, the letter said of the depressed fertility rate:

“If this rate continues, it will create great hazards and harm to our city’s economy and the happiness of the masses.” [Source]

The current warning about the economic consequences of a low birthrate echoes the way population control was rationalized at the time the Chinese government implemented the one-child policy 36 years earlier. At NPR, Rebecca Hersher discusses how China’s family planning policies have long been framed as part of the country’s overall economic development strategy.

The call for family-planning-as-patriotic-act is reminiscent of government communication about the old one-child policy, in that it focuses on economic ramifications. Previous restrictions barring most families from having more than one child were justified in economic terms, warning that the country would not be able to feed all its people.

“China’s government has long argued that having too many mouths to feed would hold back the country’s development,” NPR’s Anthony Kuhn reported from Beijing in 2015.

The argument for the shift to a two-child policy has been similarly economic, focusing on the country’s labor shortage and aging population. And the message to parents has flipped: to serve your country, procreate more, not less. [Source]

Jonathan Sullivan, director of the University of Nottingham’s China Policy Institute, observes on his blog that as long as the Chinese state continues to intervene in its citizens’ private lives, women’s reproductive rights will continue to be limited despite the abolition of the one-child policy.

The economic reform era has witnessed the retreat of the state from many aspects of people’s lives. The danwei (work unit) no longer has a say in who people marry or where they can live. Freedom of movement, despite ongoing issues with hukou(household registration) reform, was one of the engines powering economic growth.

Women’s reproductive rights have been subject to state interventions since the inception of the PRC in 1949, when Mao’s exhortations led to rapid population growth. And while the current government’s “two child policy” is less restrictive, it continues to exert control over women’s bodies.

The response to the relaxation, which started in stages in 2013, has not led to a “baby boom”. A mere 13% of eligible couples took advantage of their second child rights in 2013. Like Singapore, Macau, Taiwan and Hong Kong, which have the lowest total fertility rates in the world, increasing affluence, education and economic pressures in China are disincentives to raising large families. Furthermore, without state provision of better childcare, subsidies for schooling and systematic health care, many families are unwilling or unable to consider raising multiple children.

More pertinently, the response to the relaxed restrictions demonstrates that people can be trusted to take “rational” personal decisions for themselves. At what point will the state decide to retreat from the most intimate social relations of all? [Source]

Meanwhile, Didi Kirsten Tatlow reports in a separate article that China’s maternal mortality rate has allegedly surged by almost 30% in the first half of 2016, with some observers linking the increase to China’s new two-child initiative. Elsewhere, Hannah Beech at Time writes that an increase in demand for sperm from older couples who want to take advantage of the relaxed family-planning policy is putting unprecedented pressure on the country’s limited sperm banks.

China’s decline in birthrate has been accompanied by a corresponding shift in attitude towards marriage, with more and more young Chinese now choosing to delay marriage or forgo it all together. At The New York Times, Amie Tsang and Zhang Tiantian look at how businesses in China are shifting their marketing strategy to target singles as fewer people tie the knot.

Businesses are preparing for the shift. The jewelry industry expects sales growth to slow in China as marriage declines. In response, many stores are offering a greater variety of jewelry, such as cheaper gems to entice dating couples who have less money.

“Even though they are not getting married,” said Annie Yau Tse, the chief executive of Tse Sui Luen, a jewelry chain based in Hong Kong, “people still need someone to be with them, and they still want love.”

Jiajiashun, an online property agent, said it was planning to sell less expensive housing to cater to single buyers. Midea, a Chinese appliance maker, has been expanding its range of smaller rice cookers — giving singles a way to make fresh rice and avoid the refrigerated leftovers that leave many Chinese cold. “We are concerned about the changes in family structures in China,” according to Huang Bing, chief product manager of Midea’s small domestic appliances division. [Source]

Nevertheless,What’s on Weibo’s Ryan Myers notes that marriage is still an indispensable institution for those who want to have children at some point in their lives, as Chinese law makes it extremely difficult to do so outside of wedlock.