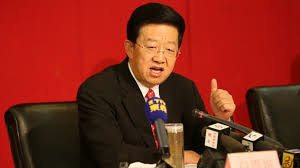 Amid Xi Jinping’s ongoing crackdown on corruption in the CCP, Bai Enpei, a former top national lawmaker and once the Party Secretary of Yunnan Province, has been given a death sentence with a two-year reprieve for corruption charges. The AP reports:

The Anyang City Intermediate People’s Court, in Henan Province, said Bai Enpei was found guilty of taking “a huge amount of bribes” and possessing a large amount of income from unidentified sources.

Mr. Bai had been a senior lawmaker with the national legislature and formerly served as the top-ranking official in the western provinces of Qinghai and Yunnan. His personal assets were also confiscated and he was barred from ever again holding office.

Reporting on Bai’s sentence for the South China Morning Post, Zhuang Pinghui describes it as the “harshest penalty imposed on a senior official arrested since President Xi […] launched his anti-graft drive.” Zhuang also explains how Bai becomes the first Party official ineligible for parole due to a 2015 amendment to the criminal law, and reports that two other former Party officials have been officially charged for corruption:

The amendment bars anybody sentenced to death with a two-year reprieve for taking “extremely huge amounts of bribes and causing huge losses” from parole or a reduced sentence.

[…] Meanwhile, Zhou Benshun, former party boss of Hebei province, has been officially charged with abusing his power and taking bribes. Zhou was a one-time top aide to disgraced security chief Zhou Yongkang, who was jailed for life in June for graft.

Zhou Benshun will be tried in the Xiamen People’s Intermediate Court in Fujian.

Yang Dongliang, the former national work safety chief who was taken away when he was investigating the Tianjin blasts in August last year, was also officially charged with taking bribes and embezzlement. He will be tried in the Beijing Second Intermediate People’s Court. […] [Source]