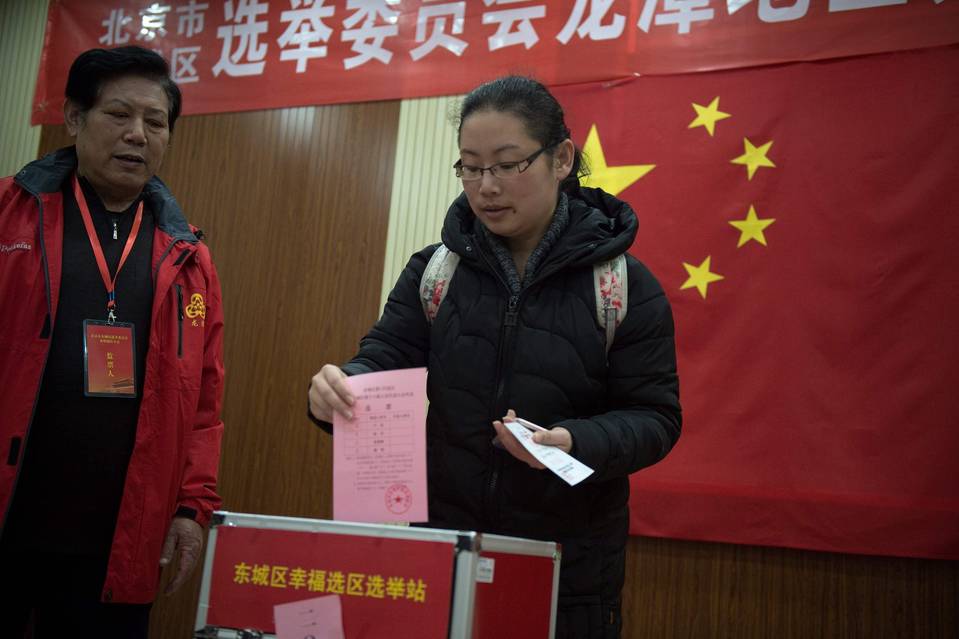 Voters in several cities across China are heading to the polls this month to elect deputies for local People’s Congresses. Every five years, eligible Chinese citizens over the age of 18 are given the opportunity to vote for grassroots legislative representatives in a series of staggered elections. The elections, however, are highly undemocratic, with Party leaders stressing political loyalty in candidate selection and nervous local governments thwarting independents from campaigning. In response, a large number of voters in several voting districts have casted protest votes using write-in ballots, which were filled in with substitutes including ‘Clinton,’ ‘Trump,’ and ‘Braised Chicken.’ Te-Ping Chen at China Real Times reports on voter efforts to subvert the elections.

Most residents sit out the exercise. Others find ways to subvert it.

[…] At the Shanghai University of International Business and Economics, a second election was hastily organized this week when an insufficient number of votes was cast for real candidates, one student said in an interview. “Most students did vote for one of the two candidates,” she said, including herself. “But some just voted in a disorderly fashion, like for Hillary or for Trump. …Others voted for ‘Braised Chicken’ or ‘the Calabash Babies,’” a reference to a popular 1980s cartoon.

[…] “If your vote doesn’t have any meaning, then why not just pick something that’s funny, or just pick in a satirical fashion?” said Li Fan, director of research center The World and China Institute.

“In the past, it was the Monkey King, or Zhu Bajie,” he said, citing two mythological figures from the Chinese novel “Journey to the West.”

“This year, I hear a lot of people voted for Trump.” [Source]

Sixth Tone’s Yan Jie spoke with millennials in Shanghai about their views on the elections.

At AP, Helene Franchineau and Christopher Bodeen look at why China’s local elections are only democratic in name:

On the surface, the rules for registering as a candidate are simple and inclusive. Apart from those put forward by the party, official organizations or government work units, candidates need endorsements from just 10 supporters to qualify for the polls.

In reality, however, the government and party officials interfere by screening candidates, preventing undesirables from running or even taking office should they win, advocacy group China Human Rights Defenders said in a recent report.

Most would-be independents are party members or have received some form of official approval and can be expected to toe the party line, said Li, who was interviewed in Hong Kong.

[…] Following a brief period of openness, the government’s attitude toward independent candidates began hardening a decade ago and grew especially tough during elections in 2011 as Xi was preparing to take power, Li said.

Campaigns put together by independent candidates are systematically disrupted by government officials, who are using a variety of intimidation tactics to prevent unsanctioned candidates from running. Javier C. Hernandez at The New York Times reports:

The elections this year are the first of their kind under Mr. Xi, whose tenure has been marked by tighter control of civil society and a harsh treatment of dissidents. Over the past several weeks, the authorities have carried out a far-reaching campaign to rein in unsanctioned candidates across the country, placing some under house arrest and barring others from campaigning.

In Shanghai, which holds elections on Wednesday, the police detained several activists who were distributing leaflets for an independent candidate, according to news reports.

In Qianjiang City, in the central province of Hubei, activists said in interviews that they had been followed by the police and blocked from speaking with voters.

Wu Lijuan, 50, a former bank employee who is now a human rights advocate, said the police had instructed residents to cut off communication with her and not vote for her. She praised the American political system and argued that Chinese elections should be more transparent.

[…] “We have a fake election,” she said. “In public, they say they allow you to have an election, but in reality, they don’t. You can’t mention the shortcomings of officials. You can’t speak ill of political leaders.” [Source]

The level of harassment directed at independent candidates suggests that the Chinese government is tightening it’s grip on power and allowing no room for dissent, even at the lowest grassroots level. From Hong Kong Free Press:

The authorities’ response to [candidate] Ye [Jinghuan] indicates how China is tightening controls on even anodyne political expression, said Yaxue Cao of Chinachange.org, a US-based website advocating for increased democracy.

In a pyramidal system, the elected local representatives choose municipal delegates, who choose provincial legislators, who in turn select members of the national parliament — which is widely expected to hand Communist party General Secretary Xi Jinping a second term as president in 2018.

Tuesday’s election is “very low-level, grassroots”, Cao said, adding “there really isn’t much you can do to push for political reform”.

[…] But “even on this useless grassroots level, simply by stating you’re an independent candidate, you’re challenging them”.

[…] There is no room for such dissent on the ballot: the Communist party has described multi-party democracy as an existential threat, and state media have savaged the circus atmosphere of this year’s US presidential election. [Source]