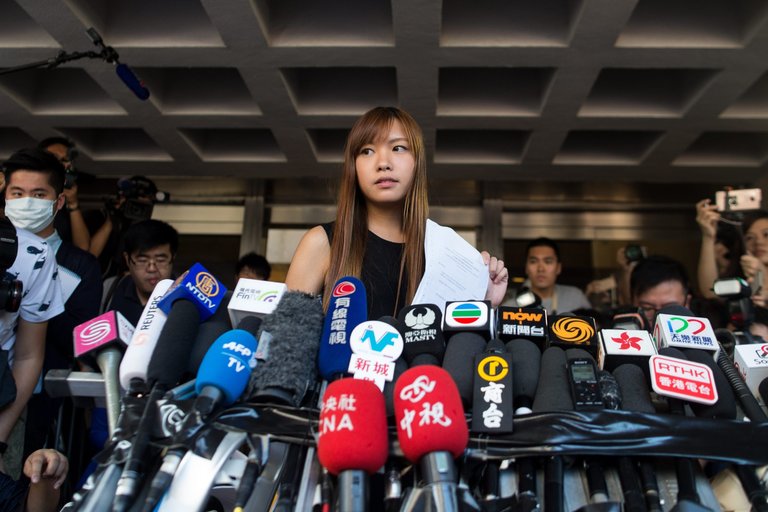 Hong Kong’s High Court has ruled that two newly elected Legislative Council members are not allowed to take their seats after they refused to repeat words in their oath pledging allegiance to Hong Kong as part of the People’s Republic of China. Last week, China’s National People’s Congress Standing Committee issued a rare interpretation of Hong Kong’s Basic Law on the issue, stating that delivering the oath “solemnly and sincerely” is a prerequisite to taking office. The two legislators, Yau Wai-ching and Sixtus Leung, are members of the Youngspiration party, which supports Hong Kong’s self-determination. At their oath-taking ceremony in October, they altered the words of the oath and held banners reading “Hong Kong is not China.” Joyce Ng, Chris Lau, Jeffie Lam, and Tony Cheung write for the South China Morning Post:

Chief Executive Leung Chun-ying, who took the unprecedented step of filing the lawsuit to have the pair disqualified, said the ­government’s next step would ­depend on whether the duo would appeal.

Sixtus Baggio Leung Chung-hang and Yau Wai-ching promptly vowed to appeal all the way to the city’s top court if necessary after the judge decided they had “declined” to take their oaths “faithfully and truthfully”.

[…] Far from ending the row, the ruling sets the stage for more disputes, with questions as to whether the pair can fight to retain their newly won Legislative Council membership through further legal battles, and whether and when by-elections can be held to fill their vacated seats.

The ruling came a week after Beijing intervened by interpreting the city’s mini-constitution to insist oath taking be conducted sincerely and accurately, but the judge claimed he was unaffected by that in arriving at his conclusion. [Source]

While the judge claimed to make his ruling independently of the NPC’s interpretation, critics believe that the High Court’s conclusion was inevitable after Beijing had spoken up on the issue. From Michael Forsythe at The New York Times:

China’s ruling, an interpretation of Hong Kong’s charter, called the Basic Law, that was issued by the Standing Committee of the National People’s Congress in Beijing, left the Hong Kong court with clear guidance. The city’s pro-Beijing government had asked the court last month to rule that Ms. Yau and Mr. Leung had violated a local ordinance on oath-taking and should vacate their posts.

The interpretation “changed the rules of the game,” said Eric Leung, a law lecturer at the University of Hong Kong.

Yet Justice Thomas Au, who made the ruling, said that he would have made the same decision even without Beijing’s extraordinary intervention, and that the two had violated an existing Hong Kong law on oaths and declarations and a provision of the Basic Law, according to a 10-page summary of the decision handed out to reporters. The judge also ruled that the president of the Legislative Council could not let the two retake their oaths.

[…] After the decision, Mr. Leung said he planned to appeal to a higher court in Hong Kong. Ms. Yau told reporters that the court’s decision was influenced by Beijing and that it undercut their democratic election. “If the court could strip us of our qualification, we all know what kind of society we live in now,” she said. [Source]

More than 1000 lawyers concerned about the impact that Beijing’s interpretation would have on judicial independence in Hong Kong marched in the city last week. Meanwhile, several participants in a rally supporting Beijing’s decision told journalists that they had been paid to attend. From Ellie Ng of Hong Kong Free Press:

A protester told Apple Daily on camera that she came from Shekou, Shenzhen, and was promised HK$300 as reimbursement for transport. She said Hongkongers were paid HK$300 more than mainland participants.

She said she came to Hong Kong alone, and did not know when or how she would receive the payment. Asked whether she knew what the demonstration was about, the protester said: “I am just hanging out here and watching [the rally].” [Source]

For Bloomberg, Adam Minter writes that “China’s leadership has grown increasingly isolated and distant from citizens, calling into question whether it can truly identify with the needs of a young and dynamic population,” including the younger generation in Hong Kong who is calling for more independence:

There are two reasons that China’s leadership has become so isolated in its decision-making in recent years. The first is a problem identified as far back as the mid-1980s: a widening generation gap. Aging Chinese leaders pose a striking contrast to a youthful population braced by vast technological, demographic and economic changes.

[…] The second factor is even more crippling. Under Xi Jinping, China’s Communist Party has become openly hostile to ideas and values perceived as threatening to the Party’s grip on power, and has purged them (and the people who hold them) from government, universities and — soon — primary schools. Sources of information that might contribute to well-calibrated decision-making, such as social media, are limited on the mainland, while a free press — long restricted in China — is under attack in Hong Kong. Meanwhile, Xi’s ongoing centralization of power ensures that many policy experts who know better, or might have better ideas, are simply shut out.

[…] If Xi aspires to restore his government’s damaged image among the city’s youth, he needs to look back to earlier leaders like Deng, who were open to outside opinions and willing to shake up an aging gerontocracy. Only then will the Chinese government have the capacity to understand and respond to the concerns of the Chinese people, whether in Hong Kong or elsewhere. [Source]