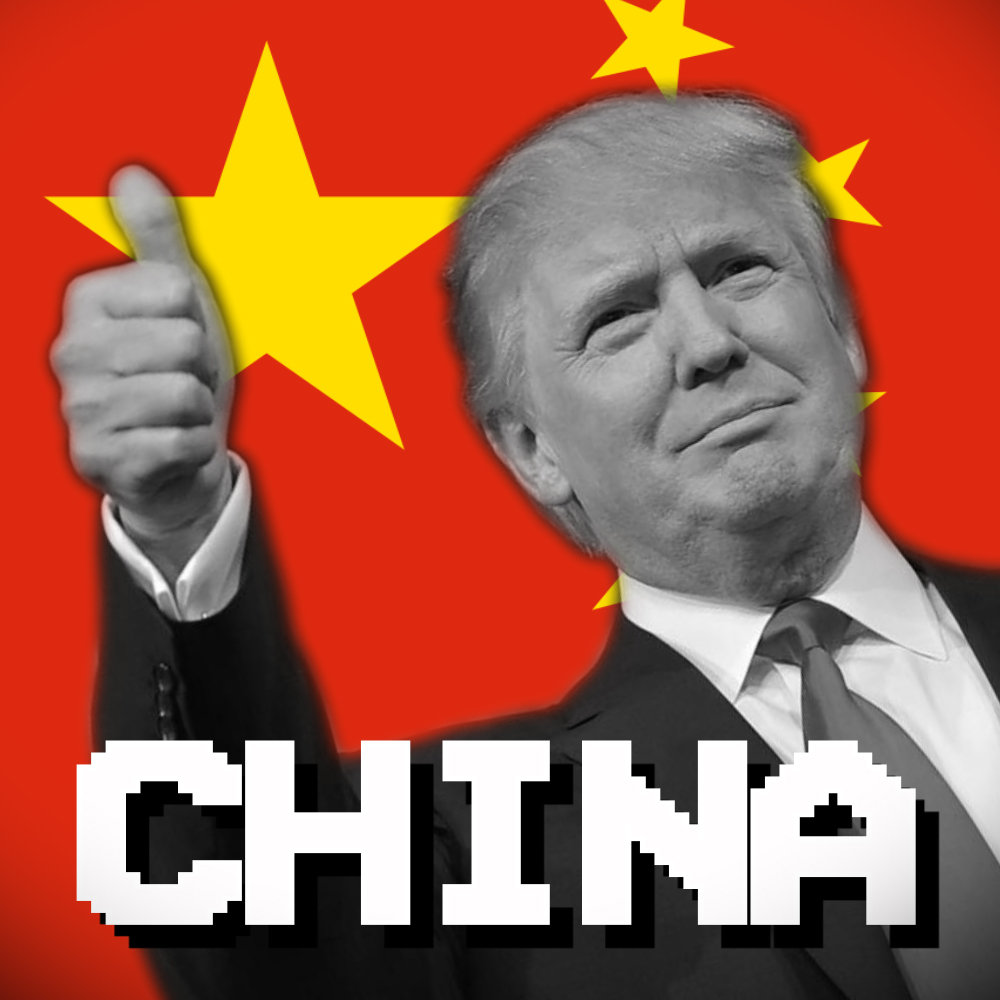 As the world anxiously waits to measure Donald J. Trump’s campaign rhetoric against his upcoming presidential conduct, his numerous mentions of China on the trail have many wondering about the future of Sino-U.S. relations under Presidents Trump and Xi. While the Chinese state has expressed cautious optimism and Xi Jinping himself has reportedly suggested that cooperation is the only choice, English-language media has been analyzing Trump’s earlier words for clues.

At The Wall Street Journal last week, Keith Bradsher surveyed the weapons President Trump could use were he to pursue a trade war with China, noting that it would carry substantial risks for both sides. Other commentators highlighted the essential position of China in the global supply chain as reason a potential trade war with China would fail, or at least not have Trump’s desired effect. The state-run tabloid Global Times also offered Trump a warning about the risks a trade war would expose to U.S. economic productivity while dismissing his campaign promise of a new 45% tariff on Chinese imports as “merely campaign rhetoric.” At the Hong Kong Free Press, J. Michael Cole laid out Taiwan’s potential security blueprint were the U.S. to withdraw the political and military support the contested frontier state has come to rely on for its de facto independence. Meanwhile, as the president-elect oversees a reportedly chaotic transition team (Trump has denied any chaos, while others have expressed shock over the emerging makeup and lack of consistency with his campaign promise to “drain the swamp”), the Chinese ambassador is allegedly concerned that Asia expertise is so far in short supply. The Financial Times Geoff Der and Demetri Sevastopulo write, “One person advising the Trump transition team said most of the Republican experts, including a large number of Asia experts, had been told that they would not be considered for jobs. He said the transition team had not unveiled its list of country experts for Asia and other regions, which was leaving foreign embassies in the dark.”

At The Guardian, Tom Phillips noted that Chinese human rights advocates, embattled by the nation’s harshest rights crackdown in decades, saw Trump’s victory last week as a menacing sign for their endeavor while Chinese political analysts see far more promise than they imagine if he had lost:

“Trump symbolises the collapse of civilisation,” complained Woeser, a Tibetan blogger and campaigner.

[…] Orville Schell, a revered China scholar who has been writing about the Asian country since the days of Mao Zedong, said that boded badly for human rights activists, who would be cast aside by the Trump administration as it sought to forge a new friendship with Beijing.

These sort of people will be roadkill in the way of his big leader machinations to reformat things [with China] and prove his acumen as a powerful and catalytic deal-maker,” he predicted.

[…] But political observers believe Beijing will have immediately seen the silver lining of Trump’s victory.

Shen Dingli, the head of the Centre for American Studies at Shanghai’s Fudan University, said the wheeler-dealer’s elevation to the White House meant a “more collaborative relationship” was now on the cards.

“In everything he is better than Clinton,” Shen said, before launching into a lengthy list of Trump’s perceived merits. […] [Source]

Asking what Trump’s election could mean for human rights globally, The Week rounded up expert commentary, much of which also predicted a further chilling of rights progress in China:

If Trump follows the course he set out during his campaign, there will be “a rush to repression in countries around the world”, warns the Washington Post.

[…] The reality TV star’s win is a “gift” to propagandists for China’s authoritarian regime, says Katie Stallard of Sky News.

A Clinton presidency would have been “four long years of criticism – of being lectured about China’s record on human rights”. Trump’s presence in the White House will let them off the hook, Stallard concludes.

[…] Trump is particularly bad news for women in China, Asia and the rest of the planet, says Stallard: “It’s hard to suit-up and advocate for women’s rights around the world when you’re known for apparently bragging about sexually assaulting them.”

Women worldwide have reason to be fearful, according to Sophie Richardson of Human Rights Watch. She said: “It’s hard to pressure other governments to improve their human rights record when you are credibly alleged to have committed abuses. [Source]

At Quartz, Cobus van Staden also surveyed the potential effect that a Trump administration, assumed to be less devoted to the universal value of human rights than its predecessors, could have on increasing China’s burgeoning influence in Africa.

We still don’t know what a Trump presidency will actually look like, especially as it relates to Africa. However, the president elect’s outspoken antipathy to traditional human rights principles—including his threats to prosecute his opponent Hillary Clinton after the election, his plan to build a wall between the US and Mexico, and his gleeful promises to ‘bomb the shit out of ISIS’— don’t fit the picture US public diplomacy has so far liked to present in Africa.

In this sense, the Trump presidency could herald the end of the binary pull between the US and China that we have seen in Africa over the last 15 years. The traditional narrative about the US and China’s role in Africa, presented by the US government, has been a choice between US-style development via liberal human rights and China-style authoritarianism.

[…] If president Trump follows through on some of the promises made during his campaign, Africans will find the ideal of American democracy a lot harder to share. This would further muddy the idea that in terms of both an ally and a development model, Africa has to choose between a democratic superpower and an authoritarian one. If both superpowers come to seem equally iffy on human rights, governance and civil society, then Africa’s choice of a development model will be more driven by these powers’ recent track records on economic development.

On these terms China is far more appealing. […] [Source]

As anxiety over the demeanor, actions, and implications of incoming President Trump proliferates, James Fallows reminds readers of The Atlantic of a compounded uncertainty concerning his approach to China, a nation that has undergone massive and concerning changes since the last time the U.S. executive branch changed hands.

[…T]he question is whether something basic has changed in the direction of China’s evolution, and whether the United States needs to reconsider its China policy. For the more than 40 years since the historic Nixon-Mao meetings of the early 1970s, that policy has been surprisingly stable. From one administration to the next, it has been built on these same elements: ever greater engagement with China; steady encouragement of its modernization and growth; forthright disagreement where the two countries’ economic interests or political values clash; and a calculation that Cold War–style hostility would be far more damaging than the difficult, imperfect partnership the two countries have maintained.

[…] The eight presidents who have managed U.S. dealings with modern China, Nixon through Obama, have essentially drawn from the same playbook. The situation could be different for the ninth. The China of 2016 is much more controlled and repressive than the China of five years ago, or even 10. I was living there at both of those earlier times—in Shanghai in 2006 and in Beijing five years later—and have seen the change firsthand. Given the chaotic contradictions of modern China, what any one person sees can be an exception. What strikes me is the consistency of evidence showing a country that is cracking down, closing up, and lashing out in ways different from its course in the previous 30-plus years.

The next president, then, will face that great cliché, a challenge that is also an opportunity. The challenge is several years of discouraging developments out of China: internal repression, external truculence, a seeming indifference to the partnership part of the U.S.-China relationship. The opportunity is to set out the terms of a new relationship at the very moment when it is most likely to command China’s attention: at the start of a new administration. […] [Source]

Fallows continues to outline what has changed—tighter media and internet controls, further restriction on civil society, more extraterritorial pressure, increased suspicion of all things foreign, and greater militarization—and to offer suggestions on China policy culled from his own experience and interviews with many leading China-watchers. He also offers his White House staff experience to Trump as he crafts his first public comments on engagement with Beijing. For more advice to both Trump and China on how to deal with one another, see ChinaFile’s most recent expert conversation.